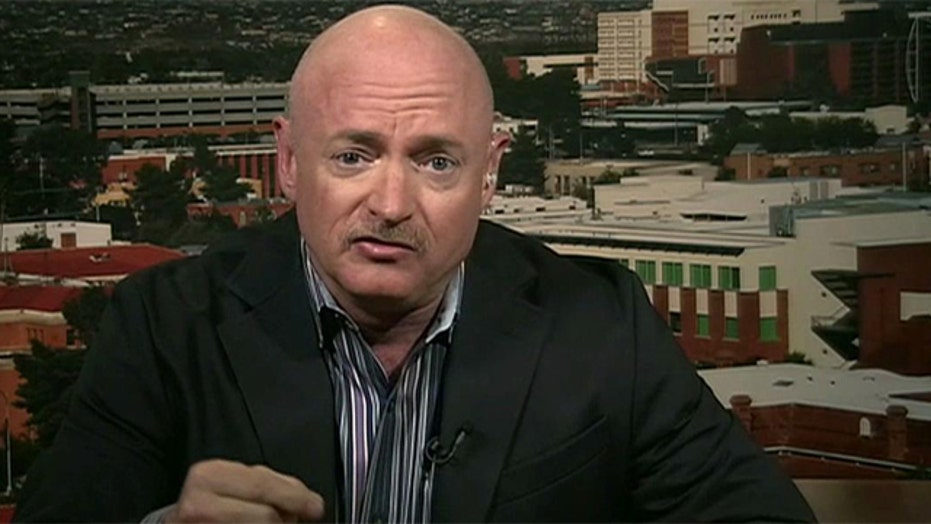 Call to action on gun control starting to fade?

Senate Democrats recently removed bans on semi-automatic weapons from pending gun-control legislation in apparent hopes of passing the more politically acceptable universal background checks -- even referring to the checks as the “sweet spot” of the proposal.

But the issue has turned into the new sticking point in Congress with a top Republican saying Sunday the plan is “going nowhere” and Democrats and other gun-control advocates pressing the issue.

South Carolina Republican Sen. Lindsey Graham repeated the argument among gun-rights advocates that the federal government should not add new checks when existing ones are not enforced.

“The current system is broken,” he said on CNN’s “State of the Union.” “Why in the world would you expand that system if you’re not enforcing the law that exists today. … So I think that legislation is going nowhere.”

Kelly, a former astronaut and Navy captain, directed his remarks to Sens. Rand Paul and Marco Rubio, among five Republican senators who have suggested they will filibuster a debate and full floor vote.

“They should listen to their constituents” and not get in the way of the debate, Kelly told “Fox News Sunday.”

Kelly, who with wife and retired Congresswoman Gabrielle Giffords leads the gun-control advocacy group Americans for Responsible solutions, said at least 80 percent of voters in Paul and Rubio’s districts favor the checks for potential gun buyers.

Giffords was shot in the head by Jared Lee Loughner, a mentally ill young man, in January 2011 during a town hall-style meeting outside Tucson, Ariz.

New York Democratic Sen. Chuck Schumer told NBC’s “Meet the Press,” he once called background checks the sweet spot “because it would do a whole lot of good and have a good chance of passing.”

“I’m working very hard with both Democrats and Republicans, pro-(National Rifle Association) and anti-NRA people, to come up with a background check that will be acceptable to 60 senators and be very strong and get the job done,” he said. “It’s very hard and we’re working hard and I’m very hopeful that we can get this passed.”

Congress returns April 8 from spring break. No vote on the legislation has been scheduled. But Senate Majority Leader Harry Reid is expected to bring legislation to the floor next month that is likely to include the background check but no bans on semi-automatic weapons and high-capacity gun magazines.

Sens. Ted Cruz, Texas; Mike Lee, Utah; and James Inhofe, Oklahoma, are the three others who have vowed to join in the filibuster.

“We, the undersigned, intend to oppose any legislation that would infringe on the American people’s constitutional right to bear arms, or on their ability to exercise this right without being subjected to government surveillance,” they said in a March 22 letter to Reid, a Nevada Democrat.

Graham said he will not join the filibuster, unless Reid blocks alternative amendments in the floor vote.

Meanwhile, Iowa Sen. Charles Grassley is crafting a Republican alternative to the one recently passed by the Senate Judiciary Committee, his office said Thursday.

No details have been released, but the bill is expected to include tougher laws on straw purchases and illegal gun trafficking, efforts to increase school safety and keeping guns out of the hands of the mentally ill.

A new CBS News poll shows 47 percent of Americans now support tougher gun laws, compared to 57 percent after the December 2012 shooting massacre at a Connecticut elementary school in which 20 first-graders and six adults were killed.

President Obama, who said the day of the shootings was the worst so far of his two-term presidency, push back last week on criticism that Washington has missed its opportunity to pass reform legislation by allowing momentum to fade.

“Let me tell you, people here don’t forget,” said Obama, who will travel Wednesday to Denver to talk with community leaders and local law enforcement officials about new state gun laws. “I haven't forgotten those kids. Shame on us if we've forgotten.”

Kelly also called the potential Grassley bill a “mistake” because it doesn’t include the background check and disagreed with the argument it will lead to a federal registry and possible gun confiscation.

However, he agreed with the argument that states a need to pass along to the federal government information about mentally ill people.

“They absolutely have a point,” Kelly told Fox.