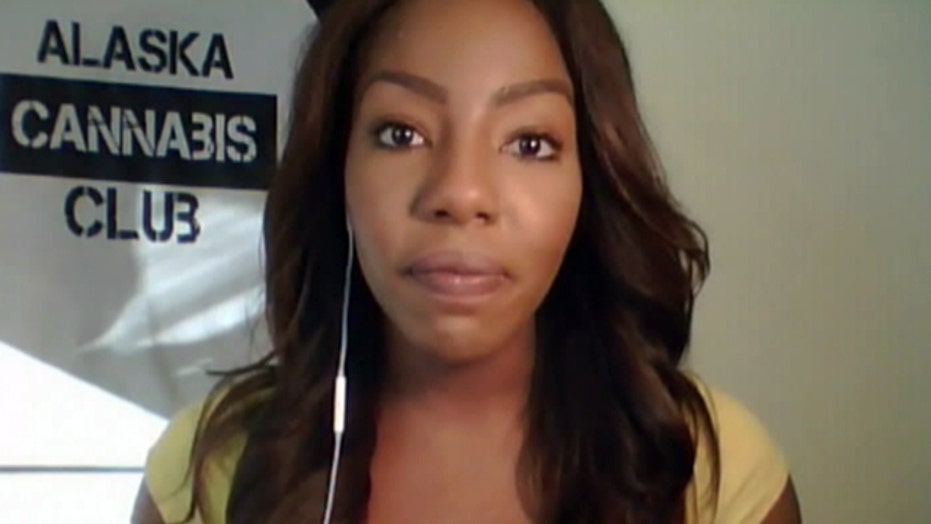 Alaska reporter who quit on air responds to criticism

Alaska reporter Charlo Greene achieved viral video fame this week by announcing on-air she was quitting to work on passing the state’s Ballot Measure 2, which would legalize marijuana.

“And as for this job ... f--- it, I quit,” said Greene, who until that moment worked for KTVA in Anchorage.

But will all the attention surrounding her spectacular exit boost the ballot initiative itself?

Perhaps not surprisingly, Greene seems to think so. She told FoxNews.com she believes her actions “1,000 percent” benefit the pro-legalization movement.

“If I had just given my two weeks, the viewers would have never known,” she said.

Others in Alaska aren't so sure what the impact will be.

The marijuana ballot measure, polls show, has voters about evenly divided, and even a small shift could make the difference. At the same time, the ballot measure has been a hot topic in Alaska for months and both supporters and opponents downplayed the impact Greene’s move may have on voters.

Taylor Bickford, a spokesman for the Campaign to Regulate Marijuana in Alaska, told FoxNews.com while it’s “entirely possible” Greene’s outspoken outreach could drive some Alaskans to the polls, it doesn’t compare to the months of work the campaign has put in to gain support.

“Charlo Greene has transitioned from someone who reported on the ballot measure to a supporter,” Bickford said. “[But] she’s just one supporter amongst many.”

Charles Fedullo, a spokesman for the "Big Marijuana, Big Mistake: Vote No on 2" campaign, told FoxNews.com he believes there will be a high voter turnout for the fall election regardless of Greene’s actions, as there are many important issues on the ballot.

“When it comes to Charlo Greene, people will make up their own minds whether she is a valuable spokesperson for the pro-marijuana organization,” he said.

The attention surrounding Greene (whose real name is Charlene Egbe) has raised some concerns from the pro-pot movement that the stunt could end up hurting the cause by casting it in a bad light.

A former neighbor of Greene's also reportedly filed a restraining order against her after claiming his daughter got sick due to the marijuana smoke from her room. Greene, who runs the Alaska Cannabis Club, allegedly threatened the father, though she denies it.

Alaska has a long and muddled history with legalized marijuana.

University of Alaska-Anchorage Professor Jason Brandeis notes that the Alaska Supreme Court ruled in 1975 that Alaskans could possess small amounts of recreational marijuana in the privacy of their homes for personal use. The permissible amount commonly is understood to be less than four ounces. Alaska also legalized medical marijuana in 1998.

However, Alaska has several laws on the books that punish any non-medical marijuana use. This has created what Brandeis called a legal “gray area” -- technically you can smoke marijuana in your home, but you can also be prosecuted if you’re caught.

“It makes it a little bit tricky,” Brandeis told FoxNews.com.

Ballot Measure 2 would do away with that gray area by legalizing recreational marijuana use for people over the age of 21, and regulating its production, sale and use in the state.

Bickford said the changes are long overdue to reconcile the “confusing” and “damaging” laws in a “state that already has a multi-million dollar marijuana industry.” Bickford added that many Alaskans believe it’s better to have Alaska’s marijuana industry regulated than in the hands of criminal enterprises.

However, Fedullo strongly disagreed. He said the anti-legalization campaign is largely made up of volunteers, everyday Alaskans worried that national pro-marijuana organizations are trying to push their agenda in the fiercely independent state.

“People are very concerned,” he said. “And Alaskans in general, the hair on the back of our neck stands up when we feel there is outside influence coming here.”

Fedullo said a “lot of people” he has spoken with in the state are worried about the effects legal marijuana has had in Colorado and Washington, and what impacts a legal marijuana industry could have on Alaska’s communities.

Greene described the ballot initiative as vital for the movement. As for her sign-off splash, Greene said after watching months of coverage on her TV station, she finally got the opportunity to voice her opinion.

“The fact that I’m sitting here with you on FoxNews.com talking about Ballot Measure 2 and what it means for Alaskans right here today just shows that whatever I did worked to spark a conversation about marijuana reform in Alaska, across the nation and across the world,” she said Thursday.