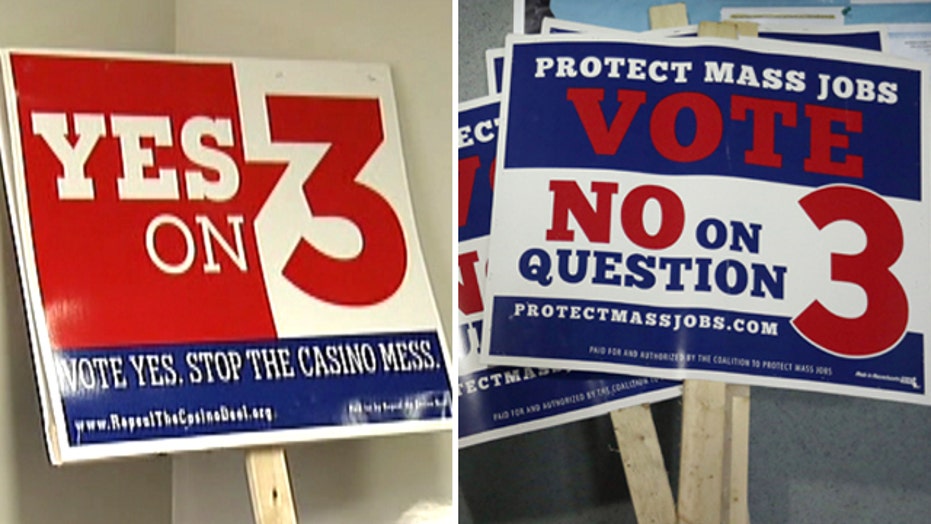 Fate of Massachusetts gambling to be decided on Election Day

Looking to rake in some much-needed cash, the Massachusetts legislature approved casino gambling in 2011. Bids were taken. Several licenses for slots and resort-casinos were awarded.

Now, all bets may be off.

A citizen-initiated ballot question this November will give voters a chance to reverse that 2011 decision -- ending casino gambling in the Bay State before it even begins.

"The promises of revenue and jobs don't hold up," said John Ribeiro, chairman of the Repeal the Casino Deal campaign. "Crime goes up around all the casinos. Small businesses can't compete because the casinos are allowed to do things that other businesses can't, and ultimately the entire economy is hurt by bringing casinos in."

One of the biggest challenges the pro-repeal side faces, though, is a funding gap. They're being vastly outspent by gambling supporters.

"They've got the deep pockets and they've got most of the politicians on their side but this is a message that resonates," Ribeiro said. "People want to protect their communities."

With billions in potential revenue in play, gambling proponents are well-funded by the casino industry, which donated $4.5 million in October alone. Commercials urging people to "vote no" on Question 3 are on the airwaves, touting jobs that will be created.

Polls show the effort is paying off, with the pro-casinos side currently holding a 13-point edge.

Following legalization in 2011, a number of communities voted locally as to whether to allow casinos. Many said not in their backyard -- but promises of tax revenue in the millions and job growth was enough for others to vote yes, including economically depressed Springfield, Mass.

The city is now approved for an $800 million MGM development that Mayor Domenic Sarno is betting will create as many as 3,000 jobs.

"The jobs. People want to work. They're hungry to work. Put them to work," said Sarno, who believes the revenue could create lucrative new opportunities in a struggling downtown.

"The city will be receiving $17.6 million in property tax revenue," Sarno said. "The properties in question were only generating $660,000 to $680,000 in tax revenue. Plus another $8 million for the community host agreement which goes towards libraries, pre-K education, public safety and economic development."

Those fighting for repeal have other hopes, and the ultimate call won't be left to chance.

The voters decide on Nov. 4.