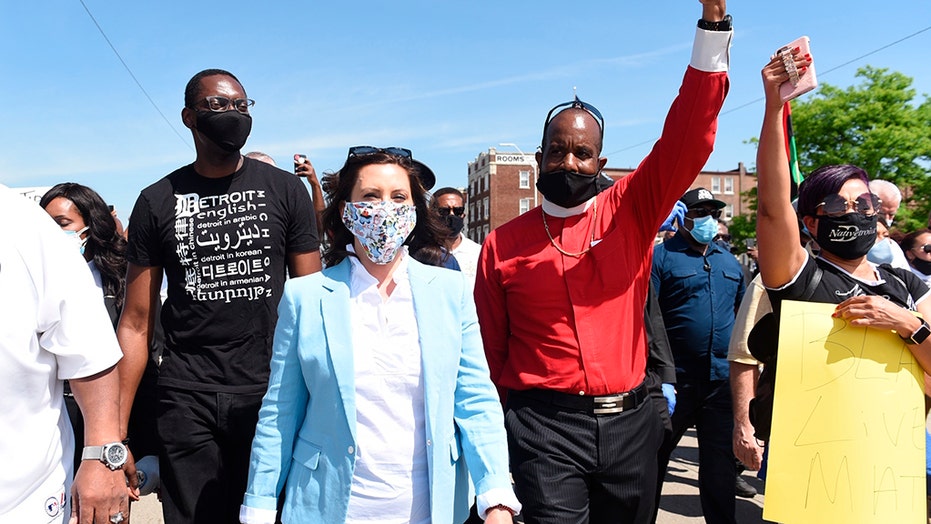 Michigan Gov. Gretchen Whitmer is facing criticism after violating her own social distancing guidelines at a protest following the death of George Floyd in Detroit on Thursday.

"Social distancing is critical to stop the spread of COVID-19 — unless you have a great photo op," state Rep. Lynn Afendoulis, R-Grand Rapids Township, quipped on Twitter.

The governor’s website instructs those engaging in protest to stand six feet apart.

“Persons may engage in expressive activities protected by the First Amendment within the State of Michigan but must adhere to social distancing measures recommended by the Centers for Disease Control and Prevention, including remaining at least six feet from people from outside the person’s household,” the website reads.

"The governor took precautions for engaging in an outdoor activity, including wearing a mask even though it is not required outdoors under the order," Brown said, according to The Detroit News.

Brown said the mayor didn’t violate her order because it stipulates, "Nothing in this order shall be taken to abridge protections guaranteed by the state or federal Constitution."

"That includes the right to peaceful protest," she said.

While many of the protesters wore masks, hardly any were seen maintaining the social distancing policy.

At the march, Whitmer urged protesters not to lose hope following the COVID-19 pandemic and the death of George Floyd.

Floyd’s death while in custody of Minnesota police officers has sparked fiery protests in every state of the country for over a week, including the past 7 days in Detroit.

Whitmer lifted her state’s stay-at-home order this week and moved most of her state into “Phase 4” of reopening.

“While Michiganders are no longer required to stay home, we must all continue to be smart and practice social distancing, and encourage those who meet the criteria to get tested for COVID-19,” Whitmer said in a statement.

Whitmer, considered a possible Democratic pick for vice president in 2020, on Monday called President Trump’s response to protests and rioting “deeply disturbing” and “a clear signal that this administration is determined to sow the seeds of hatred and division.”

“The president’s dangerous comments should be gravely concerning to all Americans, because they send a clear signal that this administration is determined to sow the seeds of hatred and division, which I fear will only lead to more violence and destruction," Whitmer said in a statement.