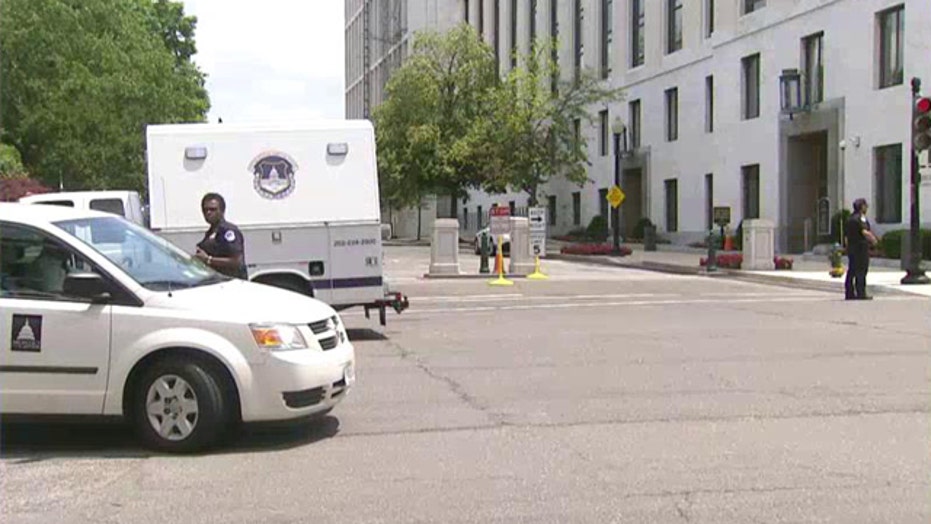 In a bizarre string of security scares, rooms at the White House and on Capitol Hill were briefly evacuated Tuesday afternoon after a pair of bomb threats.

A threat made shortly before 2 p.m. ET specifically concerned the White House Briefing Room, officials said, leading the Secret Service to clear reporters out of the room in the middle of the daily briefing.

Security officers subsequently let reporters back in, after giving the all-clear at the scene.

The incident came after several floors of a Senate office building were briefly evacuated earlier in the day over another bomb threat, though investigators did not find anything hazardous. A senior security source at the Capitol told Fox News they believe the same person who called in that threat also phoned in the threat to the White House. That possible connection is currently being investigated by the Secret Service and FBI.

Although parts of the White House have been evacuated before, including after a fence-jumper made it inside the White House last year, this was the first time that an evacuation occurred during a televised press briefing.

Secret Service spokesman Brian Leary said they moved people out as a precaution.

Still, while reporters were evacuated, White House Press Secretary Josh Earnest said, "At the time of the Briefing Room evacuation, the president remained in the Oval Office and was not evacuated by the Secret Service. The First Lady, Malia and Sasha were in the residence and were not evacuated."

Though an official earlier told Fox News that the evacuation affected the entire West Wing, the Secret Service later said it was limited to the briefing room.

Many television networks have permanent cameras installed in the briefing room. Journalists from some of those networks said that following the evacuation, the cameras were pointed up to the ceiling such that the briefing room was no longer visible. Earnest could not explain why.

In the earlier incident on Capitol Hill, staff, lawmakers and reporters were kept out of parts of the building for about an hour while police investigated the scene. U.S. Capitol Police told Fox News they received the call reporting a suspicious package in a third-floor room of the Dirksen Senate Office Building.

Police evacuated the corridor adjacent to room 340 and the floors above and below it. The Senate Homeland Security and Governmental Affairs Committee was conducting a hearing on TSA security concerns at the time on that floor. The rest of the hearing was canceled after the committee room was cleared out for the suspicious package investigation.

After about an hour, personnel were let back in the building and the scene was cleared.

Police also investigated a separate report of a suspicious package in the courtyard of the Russell Senate Office Building, but did not find anything hazardous.

Fox News' Chad Pergram and James Rosen and The Associated Press contributed to this report.