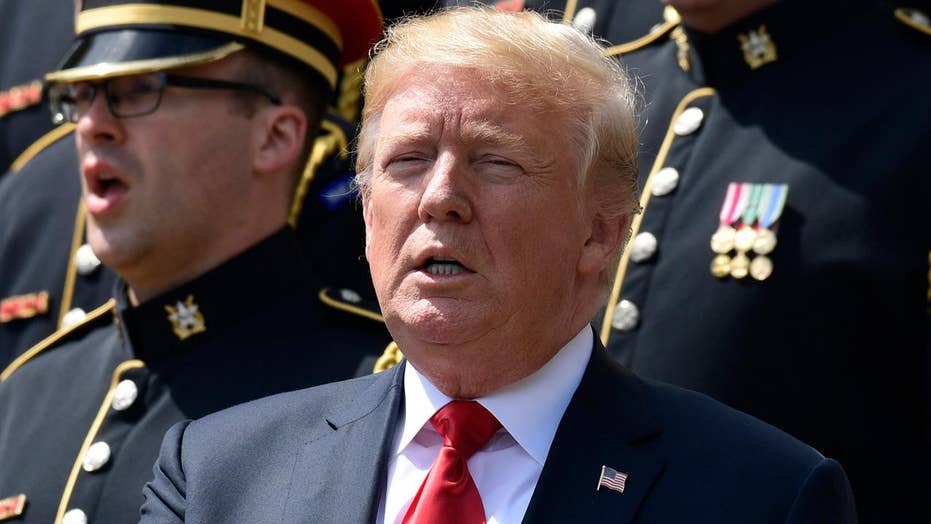 Trump: We stand to honor our military and country

The Trump administration stood firm Tuesday on its decision to rescind an invitation for the Philadelphia Eagles to celebrate its Super Bowl victory at the White House, going on to host an alternative event highlighting why Americans “stand for our national anthem.”

Minutes before the revamped program began, White House Press Secretary Sarah Sanders accused the team of a “political stunt,” and said the players who planned to boycott the event had chosen to “abandon their fans.”

The Tuesday afternoon event, held on the South Lawn of the White House, was billed as a celebration of the American flag with Eagles fans. It included performances by the United States Marine Band and the United States Army Chorus.

“I want to take this opportunity to explain why young Americans stand for our national anthem,” President Trump said at the event. “Maybe it's about time that we understood.”

TRUMP FIRES BACK OVER NIXED EAGLES VISIT: 'NO ESCAPING TO LOCKER ROOMS!'

Earlier Tuesday, as tensions flared over the nixed invite, Sanders issued a detailed statement explaining what led to this point.

She said the Eagles had initially given the White House a list of 81 players, coaches and others who planned to attend the scheduled event this past Thursday. The next day, Sanders said, the team tried to reschedule the event “citing the fact that many players would not be in attendance.” She added that the Eagles proposed to move the celebration to dates when Trump would be traveling overseas. 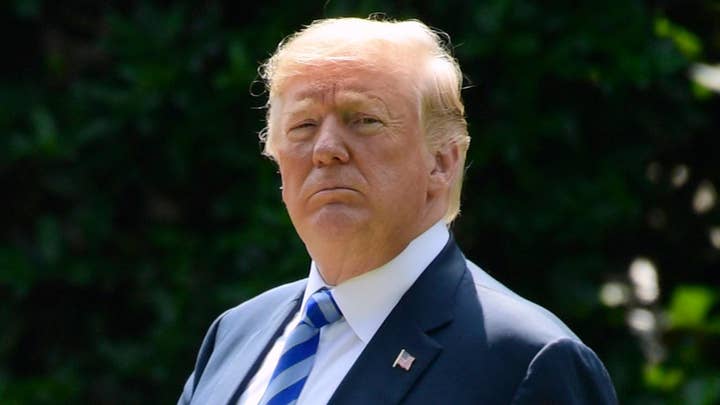 “The White House, despite sensing a lack of good faith, nonetheless attempted to work with the Eagles over the weekend to change the event format that could accommodate a smaller group of players,” Sanders said. “Unfortunately, the Eagles offered to send only a tiny handful of representatives, while making clear that the great majority of players would not attend the event, despite planning to be in D.C. today.  In other words, the vast majority of the Eagles team decided to abandon their fans.”

Eagles officials declined immediate comment on the White House version of events. An earlier team statement said, "Watching the entire Eagles community come together has been an inspiration. We are truly grateful for all of the support we have received and we are looking forward to continuing our preparations for the 2018 season."

Fewer than 10 Eagles players planned to attend the White House ceremony, according to a team official familiar with the plans who spoke on condition of anonymity because of the sensitive nature of the issue.

Trump’s cancellation of the event caused a massive backlash from Eagles players and local officials.

Trump accused the team on Monday of disagreeing "with their president because he insists that they proudly stand for the National Anthem, hand on heart, in honor of the great men and women of our military and the people of our country.”

But the team has countered that no one on the team knelt during the anthem during the last season. 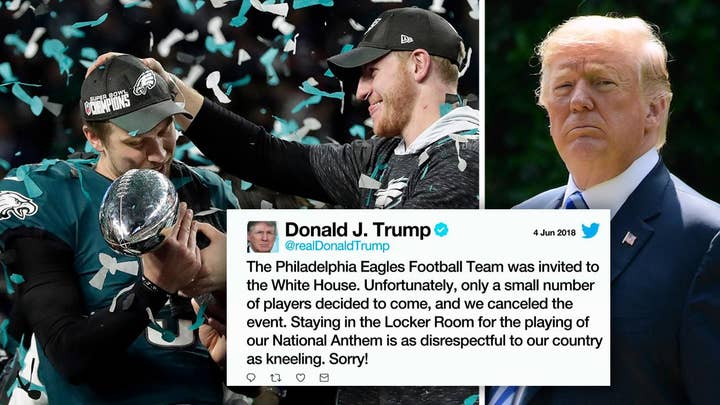 Safety Malcolm Jenkins, who has raised his fist during the playing of the anthem during each of the last two NFL seasons, said: “Simply google [sic]: ‘How many Philadelphia Eagles knelt during the national anthem last season?’ and you’ll find that the answer is zero. A similar google search will show you how many great things the players on this team are doing and continue to do on a daily basis.”

Philadelphia Mayor Jim Kenney said that Trump had proved that he “is not a true patriot, but a fragile egomaniac obsessed with crowd size and afraid of the embarrassment of throwing a party to which no one wants to attend.”

The National Football League Players Association, the union representing NFL players, said in a statement that it was disappointed by the decision to disinvite the players and said the reversal had led to the cancellation of several community service events for young people in the Washington area.

"NFL players love their country, support our troops, give back to their communities and strive to make America a better place," it said in a statement.

Fox News’ Samuel Chamberlain and Serafin Gomez and The Associated Press contributed to this report.