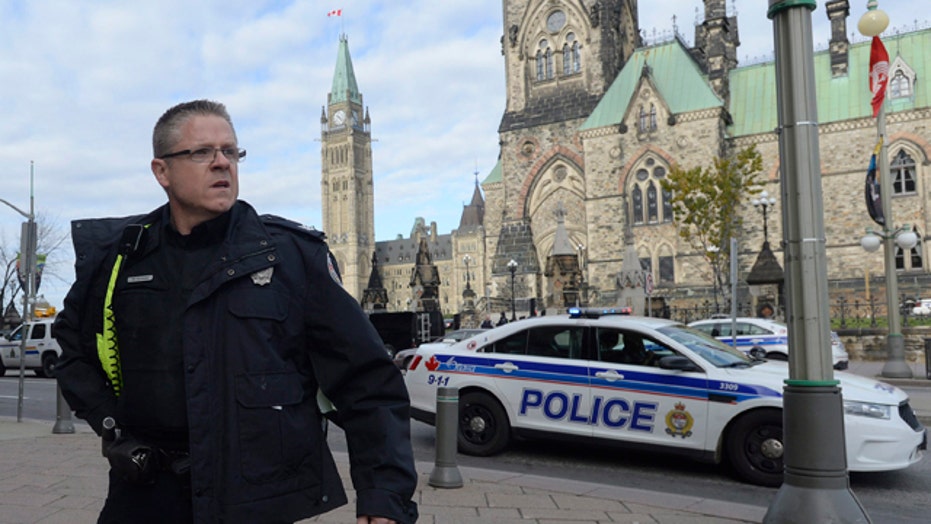 The White House on Thursday called the twin attacks this week against Canadian soldiers "despicable terrorist attacks" -- after President Obama had taken criticism for hedging his characterization a day earlier of the shooting at Canada's government complex.

Press Secretary Josh Earnest addressed the tragedy at the briefing Thursday afternoon. "Our hearts go out to the victims of the despicable terrorist attacks that occurred in Canada this week. Canada is one of our closest allies, partners, and friends in the world and we stand shoulder-to-shoulder with them in solidarity," he said.

Details still are emerging about the gunman in Wednesday's shooting, but reports say he recently converted to Islam and desperately wanted to move to the Middle East. The attack came just one day after Canada raised its terror alert and two days after another jihadist convert, Martin Couture-Rouleau, killed a uniformed Canadian soldier in a hit-and-run in Quebec. Couture-Rouleau, who was killed by police, had recently had his passport seized to bar him from traveling to join the Islamic State, or ISIS.

The Obama administration had said little until Wednesday about the hit-and-run, which came shortly after Canada's Parliament voted to join the U.S.-led airstrike campaign against ISIS.

Late Wednesday, Obama addressed both attacks after speaking with Canadian Prime Minister Stephen Harper, who was unequivocal in declaring his country had been the victim of a "terrorist."

The president stressed they "don't yet have all the information about what motivated the shooting" and whether "this was part of a broader network or plan or whether this was an individual or series of individuals who decided to take these actions."

Absent at the time was a direct reference to the gunman in Wednesday's shooting being a terrorist.

Earlier in the day, perhaps reflecting a desire not to get ahead of Ottawa in describing the attack, Earnest had said he was not "in a position to render a judgment" on whether the attack was terrorism.

By contrast, Harper declared in a televised address late Wednesday that the attacker was a "terrorist."

He said the Canadian soldier who died was "murdered in cold blood as he provided a ceremonial honor guard at Canada's National War Memorial." He said the soldier killed earlier in the week was also struck "by an ISIL-inspired terrorist."

The prime minister declared: "We will not be intimidated."

Harper repeated that message in an address on Thursday to Parliament, saying, "We will not run scared."

Describing the threat, he said, "It is hard to appreciate, understand, fathom, how we can have people who so despise or are involved in a movement who so want violence ... How they can kill, want to kill anyone who looks or thinks different from them."

U.S. lawmakers noted a difference in how Obama tackled the subject, versus Harper.

Rep. Jason Chaffetz, R-Utah, told Fox News: "When you see an honor guard killed -- murdered -- you have got to start with the idea that this is terrorism, not just, 'Hey, let's downplay this.'"

The Obama administration long has faced Republican criticism that it avoids terms like "Islamic terrorism," following attacks ranging from the Fort Hood massacre to the 2012 Benghazi attack, which the administration initially blamed on a protest gone awry.