The White House said Wednesday that “all options are on the table” in regard to the U.S. response to the deadly chemical weapons attack in Syria, noting that President Trump held both Russia and Syria responsible.

During a press briefing on Wednesday -- following the president’s early-morning tweets warning Russia not to intercept any potential U.S. missiles fired at Syria -- Press Secretary Sarah Sanders said the Trump administration had yet to make an official decision.

Russia has denied it was involved in Saturday’s suspected poison-gas attack, which unfolded in a rebel-held town near Damascus amid a resumed offensive by Syrian government forces after the collapse of a truce. Syrian activists, rescuers and medics said the attack in Douma killed at least 40 people, with families found suffocated in homes and shelters.

“The intelligence provided certainly paints a different picture,” Sanders said, regarding a Kremlin spokesman saying the claims of a chemical attack were fabricated. “The president holds Syria and Russia responsible for this chemical weapons attack,” Sanders added.

Earlier in the day Wednesday, Defense Secretary Jim Mattis said the U.S. military was still “assessing intelligence” on who was responsible for the attack.

But, State Department spokeswoman Heather Nauert tweeted, “reports from contacts on the ground in #Douma are credible,” and would be investigated.

Sanders added that the administration was “maintaining that we have a number of options on the table,” but noted, “final decisions haven’t been made yet on that front.”

“The president has a lot of options at his disposal,” Sanders said. “All options are on the table.”

Early Wednesday, Trump tweeted: “Russia vows to shoot down any and all missiles fired at Syria. Get ready Russia, because they will be coming, nice and new and ‘smart!’ You shouldn’t be partners with a Gas Killing Animal who kills his people and enjoys it!”

Sanders stressed that despite the president’s tweets Wednesday morning, he has not yet laid out his plan, or final decision.

But Sanders did place an extra layer of blame on Russia, saying the Kremlin had proven to be a “bad actor.”

“Russia has proven themselves to be responsible in part for this,” Sanders said, noting that Russia has “helped enable Syria by vetoing six United Nations resolutions to protect Assad.” 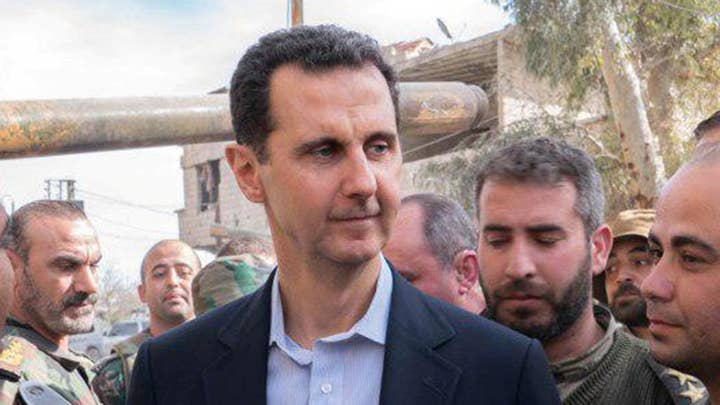 Sanders said that Russia needed to “make some changes to their behavior.”

When asked whether Trump still indended to have an in-person summit with Russian President Vladimir Putin, Sanders said she had no announcements to make in that regard.

Sanders told reporters the White House National Security team met Wednesday to discuss the U.S. response to Syria, and said the administration was “confident” in the “part of the process” where they were.