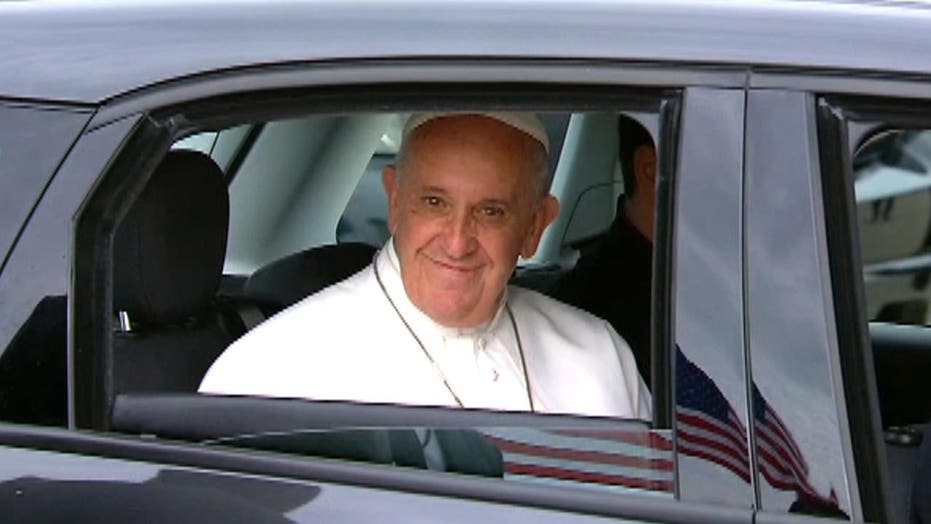 Pope Francis' US visit and its political overtones

Pope Francis will become the first religious leader to address a joint meeting of Congress Thursday morning, concluding what has been a wildly successful first leg of his six-day, three-city trip to America.

That this will not be an average speech by a typical foreign dignitary has been made clear by a letter to lawmakers from congressional colleagues sent earlier this week. The letter specifically asks legislators to refrain from attempting to shake hands or make conversation with Pope Francis when he arrives in the House chamber.

Lawmakers of all political backgrounds and religious affiliations have thrilled to the pope's arrival, pledging to pause from the bickering and dysfunction that normally divide them and hear him out Thursday morning. Tens of thousands of spectators will be watching from the West Lawn of the Capitol and many more on TV from around the world as the pope addresses a House chamber packed with Supreme Court justices, Cabinet officials, diplomats, lawmakers and their guests.

After the sergeant at arms announces him by bellowing "Mr. Speaker, the pope of the Holy See," Francis will enter the chamber and climb to the dais where the president delivers the annual State of the Union address and monarchs and heads of state have addressed Congress. Behind him will sit Vice President Joe Biden and House Speaker John Boehner, R-Ohio, the first and second in line to the presidency, both Catholics.

Ahead of Francis' remarks lawmakers of both parties have busily sought political advantage from his stances, with Democrats in particular delighting in his support for action to overhaul immigration laws and combat global warming and income inequality. One House Republican back-bencher announced plans to boycott the speech over Francis' activist position on climate change, which the pontiff renewed alongside President Barack Obama on Wednesday.

But Boehner, a former altar boy who invited Francis to speak after trying unsuccessfully to bring his two immediate predecessors, John Paul II and Benedict XVI, to the Capitol, has dismissed concerns that the politically engaged Francis will stir the controversies of the day.

"The pope transcends all of this," Boehner said. "He appeals to our better angels and brings us back to our daily obligations. The best thing we can all do is listen, open our hearts to his message and reflect on his example."

For Congress and Boehner, the pope arrives at a moment of particular turmoil, with a partial government shutdown looming next week unless lawmakers can resolve a dispute over funding for Planned Parenthood related to the group's practice of providing fetal tissue for research. Boehner himself is facing a brewing revolt from Tea Party-backed members who've threatened to force a floor vote on whether he can keep his job.

Francis is certain to steer clear of such controversies, though his opposition to abortion could bolster Republicans in their efforts against Planned Parenthood. And for members of Congress his visit may prove little more than a brief respite from their partisan warfare, offering moments of unusual solemnity, uplift and pomp, but without fundamentally shifting the intractable gears of the U.S. political system.

Indeed there's little sign on Capitol Hill of significant action on the social issues dear to Francis' heart. But on Wednesday the pope said simply that in addressing Congress "I hope, as a brother of this country, to offer words of encouragement to those called to guide the nation's political future in fidelity to its founding principles."

Francis enjoys approval ratings that any U.S. politician would envy as he's singlehandedly remade the image of the Catholic Church toward openness and compassion, yet without changing fundamental church doctrine. Addressing a chamber full of elected officials Thursday, he may be the most adept politician in the room.

After speaking in the House chamber Francis will visit the Capitol's Statuary Hall and its statue of Father Junipero Serra, the 18th-century missionary whom Francis elevated to sainthood Wednesday in the first canonization on U.S. soil. He will then briefly step out onto a Capitol balcony to address the crowds on the West Front. From there he will stop at St. Patrick's Catholic Church and the Catholic Charities of the Archdiocese of Washington, and then depart for New York for more prayer services and a speech to the United Nations.