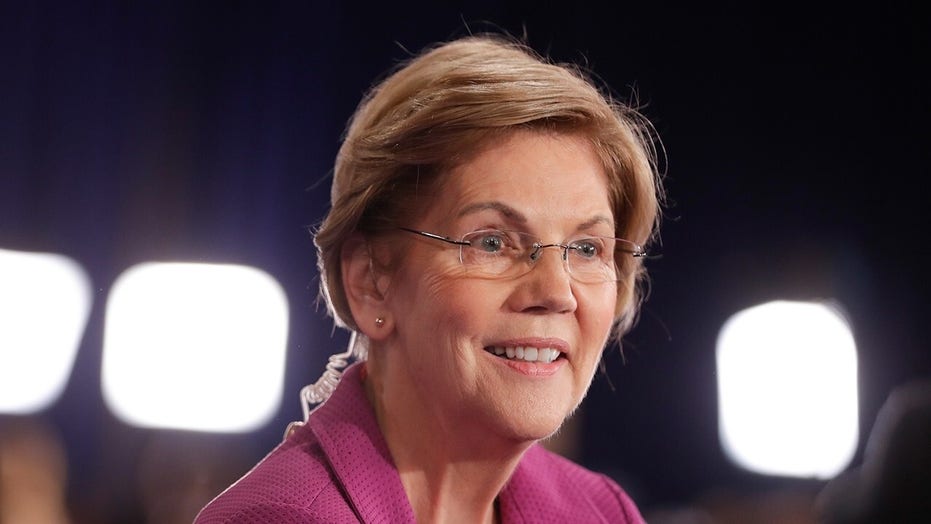 Sen. Elizabeth Warren took a sledgehammer to the health care plans of three of her Democratic presidential nomination rivals at the 2020 presidential debate in Nevada; reaction and analysis from 'MediaBuzz' host Howard Kurtz.

NORTH LAS VEGAS – Sen. Elizabeth Warren on Thursday picked up where she left off hours earlier at the Democratic presidential nomination debate, showing no mercy as she fired away at 2020 rival Mike Bloomberg.

The progressive senator from Massachusetts vowed that the former New York City mayor and multibillionaire is “not going to be our candidate for president of the United States of America.”

Speaking the day after Wednesday night’s showdown – when Warren repeatedly slammed Bloomberg over his treatment of women and his controversial policing practice of "stop and frisk" during his tenure as New York City’s mayor – the populist candidate told supporters at a campaign field office that “you know what, last night was a lot of fun.”

And explaining why she launched a full-scale attack on Bloomberg, Warren told reporters that “last night it was my job to make sure America got a little closer look at Mayor Bloomberg.”

Warren repeated one of her biggest broadsides from the showdown, saying billionaires “can call women fat broads and horse-face lesbians and then just when somebody complains, just throw a little money on it, and then put a gag in the woman's mouth. That's not right.” The "gag" remark was a reference to Bloomberg's nondisclosure agreements.

Warren also slammed a Bloomberg campaign memo released hours before the debate that argued that moderate candidates former Vice President Joe Biden, former South Bend, Ind., Mayor Pete Buttigieg and Sen. Amy Klobuchar of Minnesota should drop out of the race so Bloomberg can consolidate the centrist wing of the party against surging progressive contender Sen. Bernie Sanders of Vermont.

“The Democrats are getting down to short strokes on how we’re going to pick a nominee. Now we all know Mayor Bloomberg’s view on this – everyone else should drop out and he’ll stay. He said Bernie could stay and he’ll take out Bernie. But other than that, just the two of them and the rest of us should go away,” she noted.

Warren then vowed that “I’m not ready to go away. You really want to say, ‘Hey, Mayor Bloomberg, before you put something out like that, give [Senate Majority Leader] Mitch McConnell a call and see how telling that woman to sit down and shut up worked for him.’

And she pledged that “all I can say is we’re just getting started.”

Bloomberg, at a campaign event in Utah on Thursday morning, didn’t mention Warren when asked about the debate.

Instead, he warned that “the real winner of the debate last night was Donald Trump. Because I worry that we may be on the way to nominating someone who cannot win in November. If we choose a candidate who appeals to a small base – like Senator Sanders – it will be a fatal error.”

Fox News reached out to Bloomberg’s campaign for a response to Warren’s Thursday morning attacks but had yet to receive a response at the time this report was published.

Warren spoke as the Bloomberg campaign reported its January financial report, which indicated that the campaign spent an eye-popping and unprecedented $460 million from his declaration of candidacy in late November through the end of last month – to run ads nationwide and to build a massive campaign structure from coast to coast.

“Mayor Bloomberg thinks he can buy this election. He’s dumped $400 million into it so far and skipped the democracy part of it – shaking hands and meeting people, learning about their issues. He thought he could waltz on that stage, push everybody else off, and become the Democratic nominee,” Warren told reporters.

After disappointing third- and fourth-places finishes in the Iowa caucuses and last week’s primary in New Hampshire, Warren’s super-charged debate performance was a necessity.

Asked by reporters if her debate takedown of Bloomberg was too little, too late, Warren pushed back, saying, “We’ve heard from 2 percent of the country. We’ve got 98 percent left to go and the way I see it is because I did not spend 70 percent of time on fundraising, but instead spent it out doing town halls in 29 states and Puerto Rico and I now have offices in 31 states, I now have more than a million donors nationwide. … We’re just getting started.”

Warren's prime-time performance seemed to pump up supporters in Nevada, which holds its caucuses on Saturday.

Warren supporter Sharon Shane of Las Vegas told Fox News, “I was yelling at the TV, clapping! Because that’s exactly what I would have said to Bloomberg, you know. Somebody also need to say that to Trump also, and she’s the one to do it.”

Elise Hembree was sitting next to Shane and is a fellow Warren campaign precinct captain.

She said the debate “boosted Warren” and raved that her candidate “did such a wonderful job. She put Mr. Bloomberg in his billion-dollar place and pointed out the hypocrisy of the way he is.”