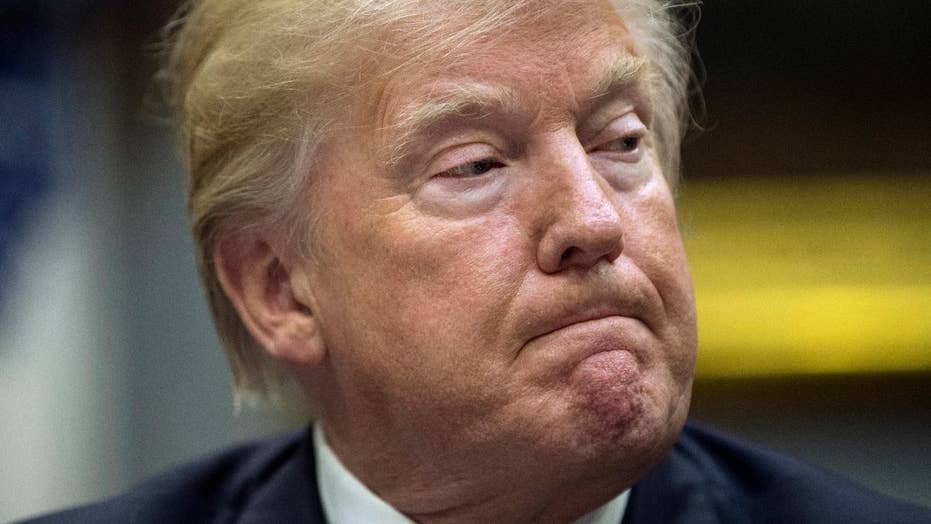 President Trump’s early-Friday denial that he used vulgar language in reference to immigration from certain countries only fueled the Capitol Hill furor over the remarks, with one leading Democrat standing by press accounts and accusing the president of using “hate-filled” language.

Two Republicans, meanwhile, said they could "not recall" the president using the language -- following reports that he questioned why the U.S. was taking immigrants from “s---hole” countries.

In a flurry of tweets Friday morning, Trump had both defended his immigration stance while claiming the reports about his meeting with senators were inaccurate.

“The language used by me at the DACA meeting was tough, but this was not the language used. What was really tough was the outlandish proposal made - a big setback for DACA!” Trump tweeted early Friday.

But Sen. Dick Durbin, D-Ill., who was in the room, later told reporters the accounts of Trump’s comments were accurate.

“He said these hate-filled things, and he said them repeatedly,” Durbin said, calling the words “vile and racist.”

Sen. Lindsey Graham, R-S.C., whom Durbin said voiced objections to Trump’s comments during the meeting, did not dispute the reported remarks in a statement Friday.

“Following comments by the President, I said my piece directly to him yesterday. The President and all those attending the meeting know what I said and how I feel. I’ve always believed that America is an idea, not defined by its people but by its ideals,” he said, adding that he appreciated Durbin’s statements and has “enjoyed working with him and many others on this important issue.”

Sen. Jeff Flake, R-Ariz., a prominent GOP critic of the president, also tweeted that, “The words used by the President, as related to me directly following the meeting by those in attendance, were not ‘tough,’ they were abhorrent and repulsive.”

Even Trump’s 2016 rival Hillary Clinton weighed in, tweeting that the eight-year anniversary of the Haiti earthquake should be a time to remember the tragedy, but, “Instead, we‘re subjected to Trump’s ignorant, racist views of anyone who doesn’t look like him.”

Yet Sens. David Perdue, R-Ga., and Tom Cotton, R-Ark., seemed to back the president in a written statement saying:

"President Trump brought everyone to the table this week and listened to both sides. But regrettably, it seems that not everyone is committed to negotiating in good faith. In regards to Senator Durbin’s accusation, we do not recall the President saying these comments specifically but what he did call out was the imbalance in our current immigration system, which does not protect American workers and our national interest."

The “language” the president referred to came during talks Thursday with lawmakers at the White House. Despite Trump's denial, multiple sources have confirmed what was said, and the White House did not deny it overnight.

“Why are we having all these people from s---hole countries come here?” the president said, according to sources. Trump reportedly was talking about countries in Africa, while also questioning why the U.S. would accept more immigrants from Haiti.

Durbin added, "When the question was asked about Haitians ... he said, `Haitians? Do we need more Haitians?"'

Trump took particular issue with the characterization of his comments on Haiti.

"Never said anything derogatory about Haitians other than Haiti is, obviously, a very poor and troubled country. Never said 'take them out.' Made up by Dems. I have a wonderful relationship with Haitians. Probably should record future meetings - unfortunately, no trust!" Trump tweeted.

TRUMP SHOULD EXPLAIN HIS REMARKS, HAITI AND SOME AFRICAN NATIONS SAY

The accounts of the meeting drew condemnation from global leaders as well as lawmakers from both sides of the aisle.

Utah Republican Rep. Mia Love, a Haitian-American, said the president's comments were "unkind, divisive, elitist, and fly in the face of our nation's values."

Amid the backlash, the president on Friday also slammed the supposed “DACA deal,” which a group senators were hammering out with the goal of extending protection for young illegal immigrants brought to the country as children. Trump on Friday detailed what he thinks is missing from the plan.

“The so-called bipartisan DACA deal presented yesterday to myself and a group of Republican Senators and Congressman was a big step backwards. Wall was not properly funded, Chain & Lottery were made worse and USA would be forced to take large numbers of people from high crime countries which are doing badly,” Trump tweeted Friday.

The reference to high-crime countries seemed to be an explanation of the concerns Trump expressed about certain nations at Thursday's meeting.

The "deal" in question was floated by a group of six senators—Republican Sens. Lindsey Graham, R-S.C., Jeff Flake, R-Ariz., and Cory Gardner, R-Colo., and Democratic Sens. Durbin, Michael Bennett, D-Colo., and Robert Menendez, D-N.J. They did not detail what was included in their deal.

“We have been working for four months and have reached an agreement in principle that addresses border security, the diversity visa lottery, chain migration/family reunification, and the Dream Act –the areas outlined by the president,” the senators wrote in a joint statement. “We are now working to build support for that deal in Congress.”

Democrats are working to preserve the Obama-era Deferred Action for Childhood Arrivals program, which was ended by Trump in September.

Trump has said he will only agree to a deal with Congress on immigration if it includes funding for his wall along the U.S.-Mexico border.

“I want a merit based system of immigration and people who will help take our country to the next level. I want safety and security for our people. I want to stop the massive inflow of drugs. I want to fund our military, not do a Dem defund,” Trump tweeted minutes later Friday.