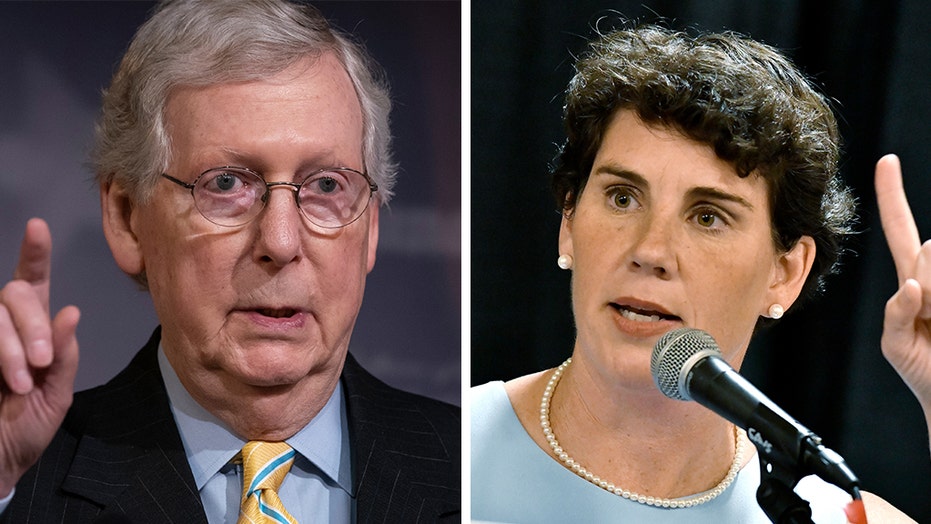 Kentucky Democratic nominee for U.S. Senate Amy McGrath received "three Pinocchios" Monday morning from the fact-checkers at the Washington Post over a claim that her opponent, Senate Majority Leader Mitch McConnell, made millions of dollars from China.

The Post cites an ad in which a narrator claims that McConnell's trade deals -- a questionable insinuation on its own given that McConnell was not part of the team that negotiated the latest China trade deals -- made China stronger and richer, while McConnell, R-Ky., "made millions from China."

McGrath herself also repeated the claim as recently as Sunday night in a tweet.

"Mitch is the architect of D.C.'s dysfunction," she said. "He's dismantled Congress’ ability to work for us so that special interests keep him in power. He & his family personally profited from China trade deals that have taken away millions of U.S. jobs and are wrecking KY's economy."

The supposed evidence for McConnell's entanglement with China, according to the fact check, is the same used by many before when making claims about the leader's alleged financial impropriety -- the shipping company owned by the family of Transportation Secretary Elaine Chao, McConnell's wife.

Chao's family is originally from China and owns a New York-based shipping company, the Foremost Group, that moves bulk goods in Asia. After Chao's mother died, the couple received a significant inheritance -- the basis for McGrath's claim. But that claim suggests that McConnell has somehow leveraged his position in the Senate to benefit himself in regards to China when, in reality, he just married into a rich family.

CORONAVIRUS BILL A MONSTER LIFT THAT WORRIES LAWMAKERS ON TWO FRONTS: BALLOT BOX AND THE ECONOMY

The Post also notes that the inheritance from Chao's mother came in 2007 and there is no indication they received significant amounts of money from her family on any other occasion -- McConnell was not Senate majority leader until 2015.

The Chaos' shipping company is also tied into the origin of the "Cocaine Mitch" nickname used affectionately by McConnell's supporters who approve of his hardball parliamentary tactics, single-minded focus on confirming judges and verbally scathing floor speeches delivered in a deadpan tone.

In 2014, Don Blankenship, a coal executive turned West Virginia Republican Senate primary candidate, ran an anti-establishment campaign in which he railed against McConnell, including saying the Senate leader created jobs for "China people" and calling his family a "China family." Additionally, Blankenship seized on a cocaine bust that occurred on one of the ships owned by the Foremost Group, which happens somewhat frequently in commercial shipping when drugs are smuggled aboard by malign actors. Neither McConnell nor the Chaos had anything to do with the cocaine, but Blankenship dubbed McConnell "Cocaine Mitch" anyway.

When Blankenship's primary campaign failed, McConnell's campaign posted a photo of McConnell superimposed over a bunch of cocaine flying through the air, much like the poster for Netflix's popular series, "Narcos."

McGrath spokesperson Terry Sebastian told the Post that "it's more than fair to point out that fact to voters" regarding the large inheritance McConnell and Chao received in 2007 from a person whose money was made in Chinese trade. Nevertheless, the Post called the claim "grossly misleading" and said, "American companies do not become less American by establishing successful shipping routes in the South China Sea."