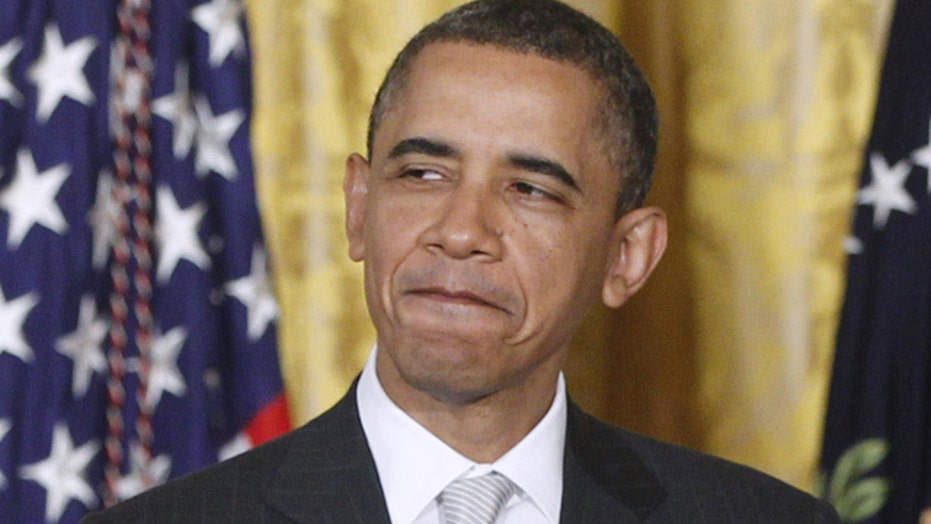 The Hill's Elise Viebeck weighs in

His poll numbers are diving, he just gave a State of the Union address that even his own supporters panned as flat, and with three years left to run the country he's fending off the term "lame duck."

So as Democrats fight to keep control of the Senate and make gains in the House, are they giving President Obama the cold shoulder?

Over the past six months, the president only has visited two states -- North Carolina and Louisiana -- where a vulnerable Senate Democrat is facing a tough race. And none of the states Obama was visiting on his latest two-day tour have Senate Democrats up for reelection in the fall.

The president's itinerary has led to Republican jeers that vulnerable and moderate Democrats are intentionally avoiding him, keeping their distance as they try to hold their seats in November.

In an interview shortly after Tuesday's State of the Union address, Sen. Mark Begich, D-Alaska, said bluntly: "If [Obama] wants to come up, I'm not really interested in campaigning."

Begich also put out a statement saying he was "disappointed" that Obama did not address drilling and domestic energy in his speech.

The comments were the latest reminder that in an election year where the president's controversial health care law and other policies are expected to factor heavily in Republican ads, some Democrats would rather go it alone.

The president rarely makes it out to Alaska anyway. But several other states far closer to the White House have been left off his itinerary for months, including Arkansas and West Virginia. Arkansas is where Democratic Sen. Mark Pryor is fighting to hold onto his seat; in West Virginia, Democratic Sen. Jay Rockefeller is retiring, leaving a seat that is prime quarry for the GOP.

Obama made one visit in recent months to Louisiana and to North Carolina. But when he visited North Carolina earlier this month, Democratic Sen. Kay Hagan was nowhere to be seen. And in Louisiana, Republicans questioned whether Democratic Sen. Mary Landrieu would invite the president going forward, after Senate Majority Leader Harry Reid told CNN he'd encouraged Democrats to do so.

Begich made his comments to CNN as well.

Republicans need to pick up six seats this fall to take control of the Senate. Among the states they're eyeing for pick-ups are Alaska, Arkansas, Louisiana, Montana, North Carolina, South Dakota and West Virginia.

Newly released Gallup numbers showed that in some of those states, Obama's approval numbers are so low as to make him a potential liability for Democrats. Gallup polling pegged his approval rating at 32 percent in South Dakota, 33 percent in Montana and 35 percent in Arkansas.

Reid, asked for clarification on Wednesday whether he would encourage Democrats to invite Obama to their states, backed off his initial comments.

"It's up to individual senators," he said. "I can't tell them who to ask [to] campaign for them. That's up to them."

Senate Democrats are playing defense in far more states this year than Republicans. One of the few Republican-held seats considered up for grabs in November is in Georgia, where incumbent GOP Sen. Saxby Chambliss is retiring.

The parties are on more even footing in the House side, where both Republicans and Democrats face plenty of competitive races.

A spate of recent retirements, including most recently from key ObamaCare architect Rep. Henry Waxman, R-Calif., has fueled GOP claims that the health care law is making their campaigns tougher.

Rep. Greg Walden, R-Ore., chairman of the National Republican Congressional Committee, said "it's a clear indication that House Democrats think they won't be wielding the gavel" after the midterm elections in the fall.

Among the House Democrats facing tough races in the fall are Rep. Ron Barber, in Arizona, and Ann Kirkpatrick, in the same state. On the GOP side, Rep. Mike Coffman, in Colorado, and Rep. Chris Gibson, in New York, are among those facing competitive races.