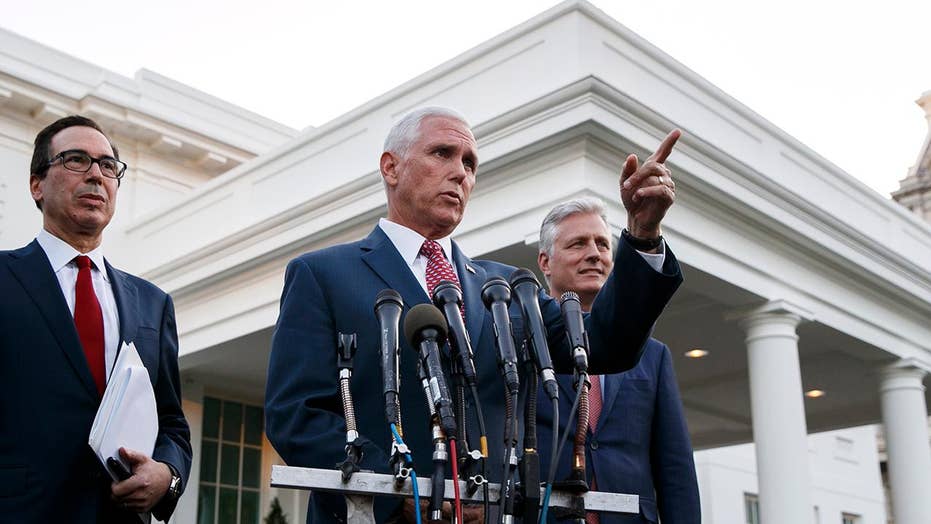 Vice President Pence will visit Turkey on Wednesday as that country continues an incursion into Syria that began after President Trump ordered the withdrawal of American troops stationed in Syria's northeast.

The White House said Tuesday that Pence will travel with Secretary of State Mike Pompeo, United States National Security Advisor Robert O'Brien and Ambassador James Jeffrey, with the goal of reaching a cease-fire agreement and negotiating a settlement between Turkey and the Kurdish forces that Americans had allied with to defeat the Islamic State.

"The ongoing violence in the region severely undermines the D-ISIS campaign, endangers civilians and religious minorities and threatens the security of the entire region," the White House said. "The administration is resolved to maintain security in the region, the safety of civilians, and the continued detention of ISIS fighters."

Pence's office says he will "reiterate President Trump's commitment to maintain punishing economic sanctions on Turkey until a resolution is reached." On Tuesday, Trump said his administration has imposed the "strongest" sanctions on Turkey.

"We are being very tough on Turkey," Trump said. "They made a lot of money shipping steel."

Pence's trip comes with tensions in the region flaring. There are reports of escaped ISIS prisoners and Russian military patrolling near the Syria-Turkey border.

Kelly Craft, the U.S. ambassador to the United Nations, told reporters Washington is “deeply concerned” that Russian troops are patrolling between the two sides.

Senate Majority Leader Mitch McConnell, R-Ky., said it was good news that Pence would be traveling to Turkey.

"I'm heartened to hear that Vice President Pence will soon lead a delegation to begin immediate talks with Turkey to end this violence," he said. "It would be a tragedy for both of our nations if Turkey's escalation in Syria imperils our common fight against ISIS and emboldens adversaries like Iran and Russia."

Now in its seventh day, Turkey’s offensive against Kurdish fighters in northern Syria has caused tens of thousands to flee their homes, It has also upended alliances, and is again redrawing the map of the volatile north Syria region.

In the first week of the Turkish assault, at least 154 fighters from the Kurdish-led Syrian Democratic Forces have been killed, as well as 128 fighters from Turkish-backed Syrian factions, according to the Syrian Observatory for Human Rights, a monitor of the war. It said at least 69 civilians have been killed in Syria. Turkey says six of its soldiers have died, as well as at least 20 Turkish civilians killed by Kurdish mortar fire across the border.