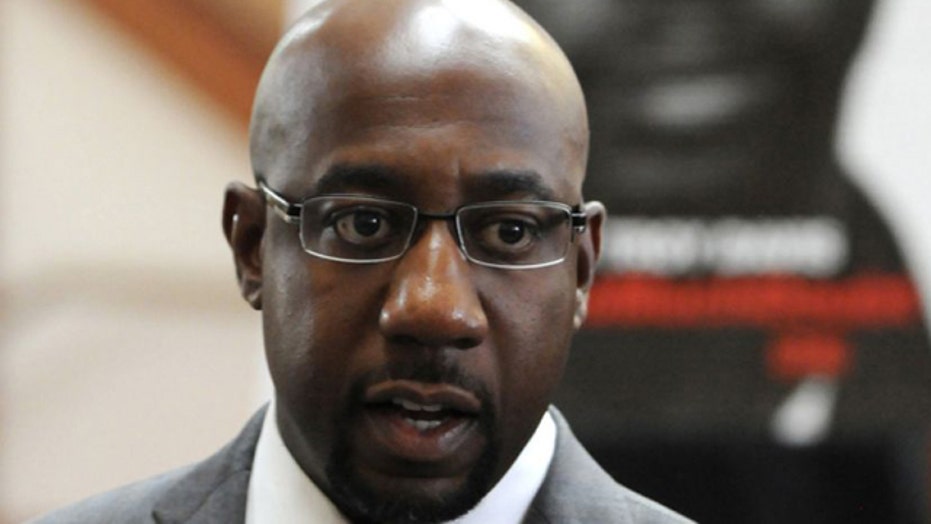 ATLANTA – As the pastor of Atlanta's famed Ebenezer Baptist Church, Rev. Raphael Warnock knows how to deliver a line for maximum effect. He employed that skill Wednesday, decrying a fraud probe the state has launched into a minority voter registration drive.

The charge, harkening back to a dark period in the South's history, was aimed squarely at Georgia's Republican Secretary of State Brian Kemp. Kemp's office is investigating whether the group Warnock is associated with -- the New Georgia Project -- has committed fraud in its drive to register more than 100,000 minority voters before the Oct. 6 deadline.

"There's somebody clearly doing something wrong," Kemp told Fox News.  "And we want to figure out who that is, and try to make sure that we stop that.  And bring charges against those people."

At an emergency hearing of the state Election Board this week, Kemp's investigator Chris Harvey laid out the elements of the case. Harvey said he had confirmed 28 cases of fraud in 14 counties -- 25 fraudulent voter registration applications and three fraudulent canvassing sheets. Some had forged signatures; others, false information. Another 26 cases were labeled suspicious.

Falsifying a voter registration form is a felony in the state of Georgia.

"Any time that you're talking about forgery and fraud in Georgia law, it's certainly very serious," Kemp told Fox News.

The issue is a particular hot button this year because of the narrow margins in the race to replace retiring U.S. Sen. Saxby Chambliss, R-Ga. Polls show Democratic candidate Michelle Nunn narrowly trailing Republican David Perdue. Nunn's campaign believes if it makes significant inroads into signing up some of the 800,000 unregistered minority voters in Georgia, she could take the seat.

The New Georgia Project was founded by Georgia House Minority Leader Rep. Stacey Abrams. She is a member of Nunn's so-called "kitchen cabinet," advising the candidate. Abrams told Fox News she maintains a clear wall of separation between her work with the Nunn campaign and what she insists is a "nonpartisan" effort to get more minorities out to the polls in November.

Kemp has slapped the New Georgia Project with a subpoena, demanding any and all documents and communications related to the voter registration drive by next Friday. The NGP fired back on Wednesday proclaiming its innocence and says it is strictly following the law. Abrams complains that the subpoena is "overly burdensome and an abuse of power," and is taking valuable time away from the group's voter registration drive.

"We do not object to sharing information, but what we do object to is a witch hunt -- and a fishing expedition," Abrams told the press conference.

The NGP lashed out at Kemp, accusing him of a pattern of voter suppression and intimidation. They charge that of 85,000 new voters they have signed up, 51,000 have not yet been registered. Kemp insists that any valid voter registration forms will be processed by the appropriate county officials and that his office is not blocking the registration of minority voters.

"I was very disappointed in a lot of the reverend's comments," Kemp told Fox News. "I think anybody that knows me knows that I'm not a racist and some of the things that they've said and accused me of are just flat wrong."

New Georgia Project officials claim the words fraud, forgery and felony have a chilling effect on any other organizations who might want to sign up new voters.

"Mr. Secretary of State, stop this dog and pony show with all of the subpoenas -- with all of the false accusations and the smear campaign, and do your job," Warnock demanded at the press conference.

Kemp insists his job is exactly what he is doing -- and that reports of fraud and forgery were brought to his attention by several counties and that it is simply his duty to investigate them.  He told Fox News that with what is at stake in November, it's not a surprise the matter has become so politicized.

"It's unfortunate that it's gotten political, but we're in the silly season, if you will right now, and have some big races in Georgia."