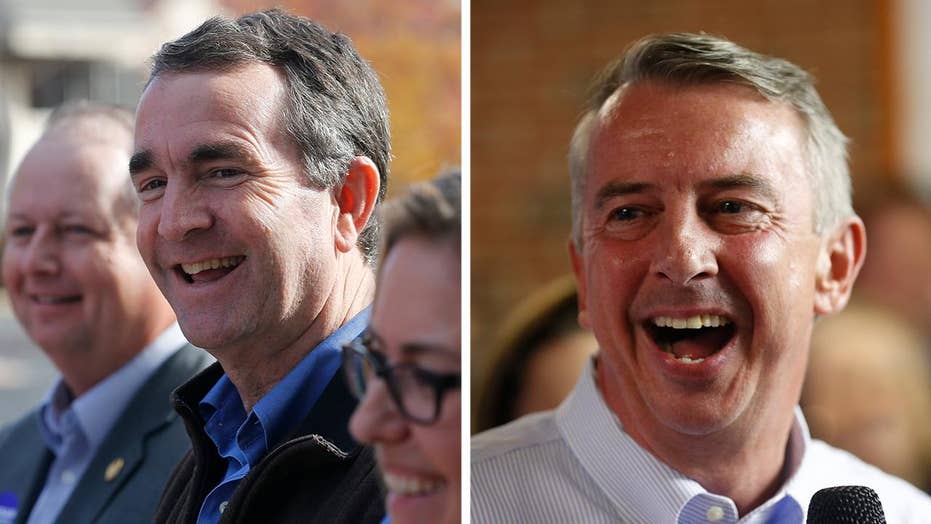 Where the Virginia gubernatorial race stands on election eve

Republican Ed Gillespie could pull off an upset, while the Democrat Northam has been doing his best to make Trump a liability; Peter Doocy explains on 'Special Report.'

President Trump paused from his overseas trip to Asia to blast the Democratic nominee in Tuesday’s Virginia gubernatorial race as “weak” on crime, veterans and the Second Amendment, in a final push for Republican Ed Gillespie.

Democrat Ralph Northam has maintained the lead in most polls heading into Tuesday’s election, but the latest Fox News Poll shows him with just a 5-point edge. Republicans claim their nominee has momentum and a chance to pull off an upset, in a race marked by tough ads and accusations on both sides.

Trump sounded off on Northam, in between meetings in South Korea.

“Ralph Northam will allow crime to be rampant in Virginia. He’s weak on crime, weak on our GREAT VETS, Anti-Second Amendment … and has been horrible on Virginia economy. Vote @EdWGillespie today!” he tweeted Tuesday morning.

Trump added that Gillespie “will totally turn around the high crime and poor economic performance of VA. MS-13 and crime will be gone. Vote today, ASAP!”

Only Virginia and New Jersey are holding gubernatorial elections Tuesday. The Democratic candidate is favored to win in the Garden State, but the Virginia race is tighter.

While showing his support on Twitter, Trump has not actively campaigned with Gillespie during the race. But Democrats have still tried to link Gillespie to the Trump White House at every turn, hoping the president’s low approval ratings can depress turnout for Gillespie.

On Monday, Gillespie questioned whether the Democrats' strategy is a sound one.

“They’ve known they’re in a close race for some time. They’ve been throwing the kitchen sink at us with awful and vile ads,” Gillespie said on Fox News’ “Daily Briefing” Monday.

The most controversial of those ads was run by a Democratic group, Latino Victory Fund. It showed minority children seemingly being chased by a driver in a pickup truck, decked out with a Confederate flag and a “Gillespie for governor” bumper sticker. The ad concluded with a scene of a Charlottesville-like rally, with a narrator asking: “Is this what Donald Trump and Ed Gillespie mean by the ‘American Dream?’”

The ad was removed after extensive backlash.