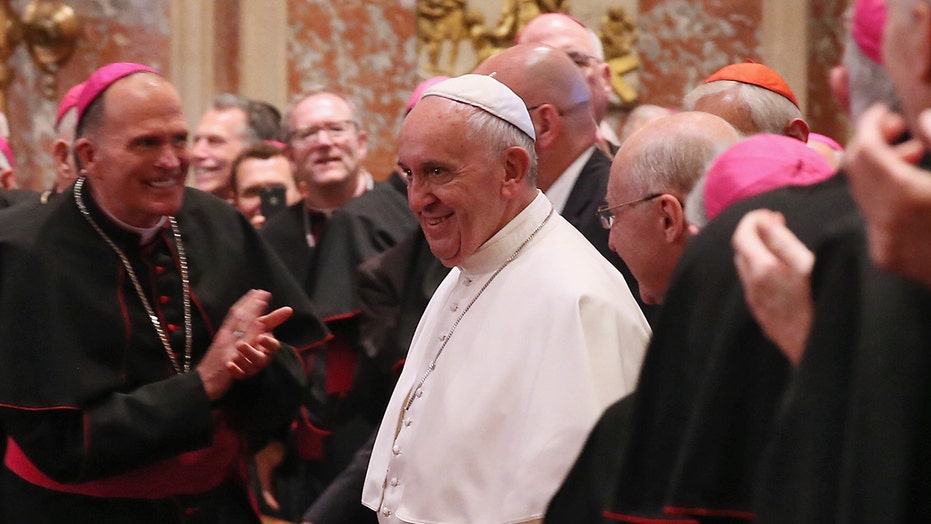 Pope Francis weighs in on attacks to religious freedom

Pope Francis should feel quite at home when he descends on the U.S. Capitol Thursday morning. He’ll deliver an historic speech to a Joint Meeting of Congress and address the throng of pilgrims assembled on the National Mall from the Speaker’s Balcony.

The pope should feel comfortable at the Capitol because it’s laced with Catholic and ecclesiastical themes – ranging from the Capitol Dome itself to art and statuary lining the corridors. All mirror Catholic motifs found at the Vatican.

One of the first things the Holy Father will spot en route to the Capitol is the cast iron dome itself. It’s now sealed in a skeleton of scaffolding as it undergoes the first major renovation in more than half a century. Regardless, the Capitol Dome dominates the Washington skyline just as the dome of St. Peter’s Basilica does in Rome and Vatican City. The U.S. Capitol and St. Peter’s Basilica are massive structures, jutting above nearby buildings and radiating power and importance.

The pope will enter the Capitol through what’s called the House Carriage Entrance. He’ll  pass by the first of three major statues dedicated to influential figures in Catholic and American history. There’s a total of five Catholic statues in the Capitol complex.

Much has been written about the pope canonizing Father Junipero Serra, the first canonization on U.S. soil. The pope will make a brief stop by Serra’s statue in the Capitol’s Statuary Hall. But before that, the pontiff will stroll through the Hall of Columns. The Catholic Church now recognizes Serra as a saint. But one of Hawaii’s two statues in the Capitol already depicts a priest whom the church canonized several years ago: Father Damien.

The bronze, quadrate statue of Father Damien stands watch over the Hall of Columns. He’s cloaked in a boxy cope, his hands gripping a cane. A native of Belgium, Father Damien tended to a leper colony on the island of Molokai. He eventually contracted leprosy himself and died. The church recognizes Damien as a patron saint of outcasts. Pope John Paul II beatified Damien in 1995. Pope Benedict XVI canonized Damien in 2009.

Standing just steps outside the House Chamber is Father Jacques Marquette, a Jesuit missionary. Marquette settled in what is now Michigan and explored the northern Mississippi River. Marquette Counties in Michigan and Wisconsin are named after the Father -- as is Marquette University in Milwaukee.

The pope’s next formal stop is before the statue of Junipero Serra in Statuary Hall. The pope will pause briefly at Serra’s statue. But precisely what the pope may say or do is unclear. Still, the intention of the respite is demarcated clearly on the Statuary Hall floor. Several days ago, a green, duct-tape “X” appeared immediately in front of the statue. A similar duct-taped “arrow” sign is also now affixed to the Statuary Hall floor, pointing in the direction of the Speaker’s Office.

Serra’s statue is one of the two figures in the Capitol representing California. The other is President Reagan. The Serra statue shows him staring toward the heavens, hoisting a cross in his right hand. Catholics credit Serra with spreading Catholicism in California, founding nine Spanish missions from San Diego to San Francisco. Pope John Paul II beatified Serra in 1988. But Serra has faced controversy. Many Native Americans argue that the Franciscan suppressed their ancestors. This prompted California state Democratic Sen. Ricardo Lara to introduce a bill to withdraw Serra’s statute regardless of the canonization. Lara wants Serra replace it with astronaut Sally Ride, the first American woman in space.

For now, Lara is holding off on a vote to replace Serra with Ride.

The Capitol features two other prominent Catholic figures, both in the Capitol Visitor’s Center (CVC). From Arizona is Father Eusebio Kino. He was the first geographer and cartographer in the region and helped build missions. Representing Washington State is Mother Joseph of the Sacred Heart. She constructed schools and provided health services for children in the Pacific Northwest.

Pope Francis won’t be anywhere near the CVC or even cross to the Senate side of the Capitol during his visit, home to artwork which mimics various Vatican locales.

Constantino Brumidi served as the master painter of the Capitol. Trained at the Vatican, Brumidi painted what are now known as the “Brumidi Corridors” in the Senate wing.

At the Vatican. Michelangelo painted the fresco of the “The Last Judgment” at the Sistine Chapel. Brumidi composed the “Apotheosis of George Washington” on the underside of the Capitol Dome and the “Frieze of American History.” Both are visible from the Rotunda floor.

Raphael crafted the loggia at the Vatican’s Apostolic Palace. It is the quintessence of the Italian Renaissance. Its frescoes depicted the Last Supper and scenes from the Bible. Brumidi’s imitation of Raphael is clear in the corridors which snake through the Senate. Brumidi populated Senate pilasters with images of feathers, animals and foliage – much in the same way Raphael illustrated fauna and swirling vines at the Vatican.

Depending on the light and time of day, one hallway in particular near the Senate Parliamentarian's Office looks strikingly similar to corridors at the Vatican – only smaller.

But the pope won’t see any of that. He’ll barely be at the Capitol before heading to St. Patrick’s Catholic Church to sit with the homeless for lunch.

The U.S. Capitol may feel a little like home for Pope Francis. But tending to his flock is where this pope really feels at home.