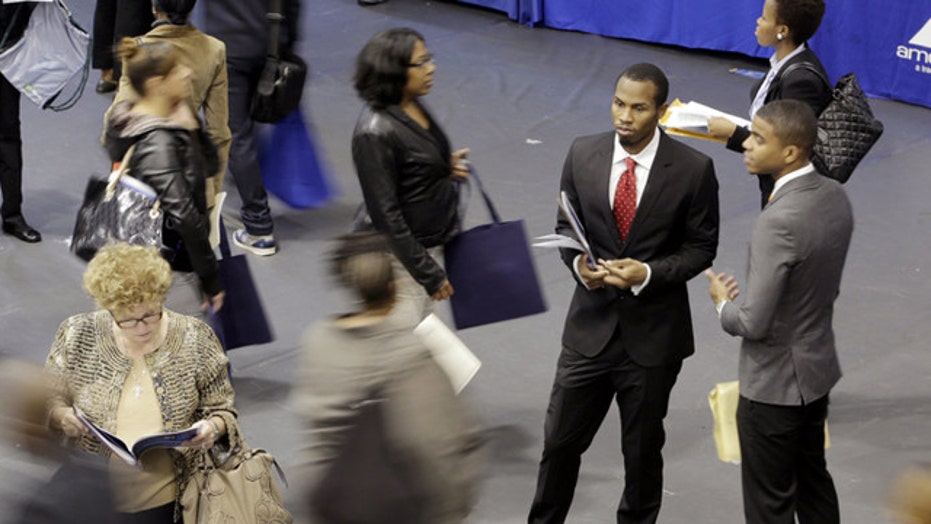 The Labor Department said Friday that the unemployment rate fell to 5.5 percent from 5.7 percent. But the decline in the rate occurred mainly because some people out of work stopped looking for jobs and were no longer counted as unemployed.

The strong job gains weren't enough to boost wages by much. The average hourly wage rose just 3 cents in February to $24.78 an hour.

Still, over the past 12 months, 3.3 million more Americans have gotten jobs. More jobs and lower gas prices have led many consumers to step up spending. That's boosting the economy, offsetting sluggish economies overseas and giving employers the confidence to hire.

The strengthening job market could give the Federal Reserve room to move toward raising interest rates from record lows. Most analysts expect the Fed to pave the way for higher rates by adjusting the statement it issues after its March policy meeting, to be followed by the first hike in June or September.

After the jobs report was released Friday morning, investors sold ultra-safe U.S. Treasurys, a sign that many anticipate a Fed rate hike. The yield on the 10-year Treasury note rose to 2.18 percent from 2.11 percent before the report was issued.

The U.S. job market and economy are easily outpacing those of other major nations. Though Europe and Japan are showing signs of growing more than last year, their economies remain feeble. The euro currency union's unemployment rate has started to fall, but at 11.2 percent it remains nearly twice the U.S. level.

The U.S. economy expanded at a breakneck annual pace of 4.8 percent in last year's spring and summer, only to slow to a tepid 2.2 percent rate in the final three months of 2014. Many economists estimate that growth is picking up slightly in the current quarter to an annual rate of 2.5 percent to nearly 3 percent.

Still, economists remain bullish about hiring despite the slowdown in growth. The fourth quarter's slowdown occurred largely because companies reduced their stockpiles of goods, which translated into lower factory output.

But companies focus more on consumer demand in making hiring decisions, and demand was strong in the October-December quarter. Americans stepped up their spending by the most in four years.

And though consumers are saving much of the cash they have from cheaper gas, spending in January still rose at a decent pace after adjusting for lower prices.

Mark Zandi, chief economist at Moody's Analytics, expects the economy to grow 3 percent this year, which would be first time it's reached that level in a decade. That's fast enough to support hiring of about 250,000 a month, he said.