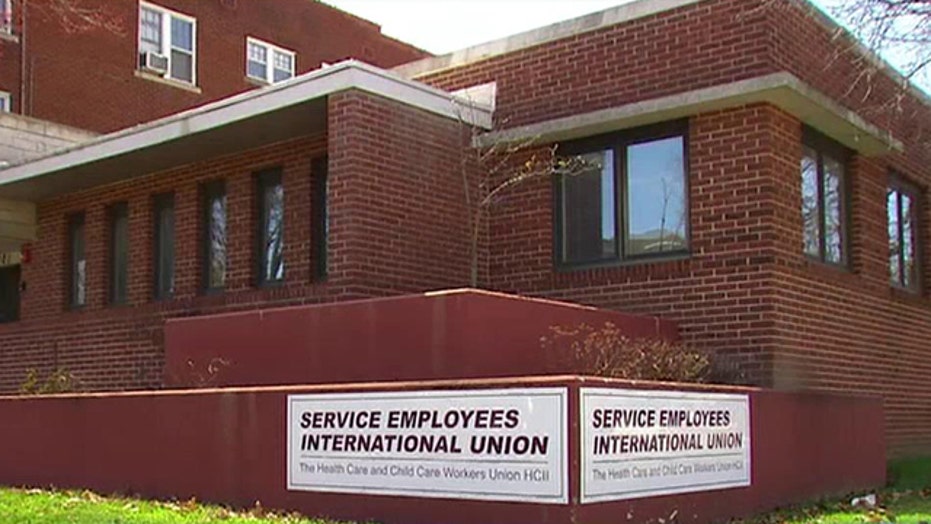 The future of public and private unions in two big labor-friendly states may be at stake as foes mount aggressive legal challenges over the long-controversial practice of mandatory dues.

The court cases in Illinois and California revolve around so-called "fair share" payments, or the dues unions extract from workers whose jobs stand to benefit from collective bargaining -- whether or not the workers are technically union members. Unions argue workers should have to pay their "fair share" of the costs of negotiating and administering a union contract, so they’re not getting a free ride from the union’s efforts.

But workers are often surprised to see money taken from their paychecks, without their consent.

“I really found out about it when I got my first paycheck and there was the fair share that was pulled out,” said Mark Janus, who works as a child support specialist with the Illinois Department of Healthcare and Family Services.

The fees taken out of Janus’ check amounted to about $46 a month, every month, for the eight years he’s been on the job. “I figured I’d paid over $4,000 so far,” he said. The money Janus unintentionally paid went to the American Federation of State, County and Municipal Employees, also known as AFSCME, which represents employees in his office.

Janus is now one of three plaintiffs who have joined with Republican Illinois Gov. Bruce Rauner in a lawsuit to overturn the state's so-called fair share law.

“I don't feel that the union represents me 100 percent in what I believe and what I like to do,” Janus explained. “And nobody asked me if I wanted to join the union, they just said 'here's a job, you're in the union.'"

The intention of the lawsuit is to get a federal judge in Chicago, and ultimately the U.S. Supreme Court, to declare the fee for non-member dues unconstitutional.

In addition, Rauner issued an executive order with the same purpose.

“This is a fundamental issue protecting employees’ rights, their freedom of speech, and their rights as employees,” Rauner said.

But Tim Drea, the Illinois AFL-CIO secretary treasurer, said “all state employees benefit from what the unions do on wages and bargaining ... health care and pension benefits.”

While the fair share law requires that no money raised from the fees be used by the unions for political purposes, Rauner said that’s not possible when it comes to a state employees union.

“By their very nature government political activities are political. They’re inside the government and advocating with politicians, so by definition it’s all political,” Rauner told Fox News.

On the West Coast, a similar battle is taking place that some claim could put an end to the teachers' union.

In Friedrich v. California Teachers’ Association, 10 teachers filed suit over a state law requiring dues to the union they don’t support. The teachers said the law violates their constitutional rights.

The fair-share labor law was formed as a result of a 1977 court case called Abood v. The Detroit Board of Education. In that case, public school teachers in Detroit sought to overturn a requirement that they pay dues to the teachers' union on the grounds they didn’t support the union activities or collective bargaining.

The court sided with the unions and determined that non-members can be charged fees, though the money from fees could not be used for political purposes.

Since that decision came down, about half the states in the U.S. -- the ones that are not right-to-work states -- require workers in union-backed jobs who don’t want to join a union to pay their “fair share.”

In the Midwest, where auto workers, Teamsters and other unions have had a stronghold for years, the right-to-work plan has been met with massive protests and multiple court battles -- yet right-to-work laws have passed in Michigan, Wisconsin and Indiana.

Now that battle lines are being draw in Illinois, the Land of Lincoln state may become the last stand in America’s heartland for the unions. Without a policy of mandatory dues, unions anywhere stand to lose revenue and members.

“In half the other states in the U.S., government workers have a right to choose whether they will give money to a union. In Illinois, government workers don't have the right to make that choice,” said Jacob Huebert, an attorney for the Liberty Justice Center, which is representing plaintiffs in the Illinois lawsuit.

Huebert said he’s encouraged to test the issue because of the court’s response to another challenge to the union dues requirement by an Illinois woman named Pam Harris.

Harris didn’t want to have to pay dues to a state workers union just because she’d taken on a job as home health care worker for her mentally and physically disabled son. The Supreme Court ruled that Harris was not a state employee and therefore didn’t have to pay dues.

As part of its opinion in the Harris case, the court stated that the Abood decision may not withstand a challenge. The Liberty Justice Center was inspired to mount that challenge.

Labor leaders, who plan to “mount a vigorous defense” to the lawsuits, claim opponents are just trying to weaken and choke off unions in general, especially in Illinois where negotiations for a new contract are taking place.

Drea said he feels confident the court will rule in favor of the fair-share decision, but he worries the continuous battle resulting in right-to-work states “is just a further continuation of the race to the bottom” for Americans.

The Supreme Court may decide before summer whether to take on the California case.

As for the Illinois case, a federal judge in Chicago will decide on it first, though the plaintiffs hope it eventually makes it to the high court as well.