The U.K. government has reportedly told President Trump he must not meet Brexit architect and former U.K. Independence Party leader Nigel Farage when Trump visits the U.K. later this month.

The U.K. Daily Telegraph, citing a source within the British government, reports that 10 Downing Street made it clear that Trump “must not meet Farage” during his working visit to the U.K. on July 13.

Trump has embraced Farage, who is also a Fox News contributor, and called him “the man behind Brexit” during the 2016 campaign.

Farage told Fox News he would not comment on any conversations he had with the White House but said the Telegraph report was “utterly consistent” with past behavior from the U.K. government.

“The one thing they do not want me doing is having a photograph with the U.S. president when he’s in London with both of us saying ‘Brexit is a great idea, why doesn’t the government just get on with it?’”

A Downing Street spokesman referred Fox News to comments it made to the Telegraph, saying it was "not even aware of a meeting being requested" and that "either way we are not trying to stop one."

Farage played a key role as UKIP leader in putting pressure on then-Prime Minister David Cameron’s government to call for the 2016 referendum on whether the U.K. should leave the European Union, and also for securing a win for the “Leave” campaign.

Trump has embraced Farage and suggested him as British ambassador. (Twitter)

In particular, Farage was key in promoting limiting immigration as a defining issue of the “Leave” campaign, just as then-candidate Trump’s 2016 presidential campaign was doing the same.

Since the Brexit result, Farage has been a thorn in the government’s side as he has repeatedly blasted the government for dragging its feet on implementing Brexit, and for being too soft in negotiating with Brussels.

“Number 10, the establishment Conservative Party, have a pathological hatred of me,” Farage told Fox News on Friday. “They see me as being the reason they had to offer a referendum, they see me as being one of the major reasons they lost the referendum and now they have to implement something they don’t believe in. They hate it and they’ll never forgive me until the day I die.” 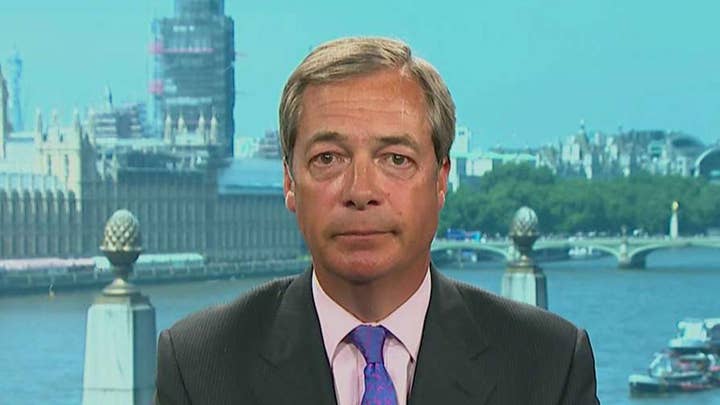 Trump ruffled feathers in November 2016 when, shortly after his election win, he suggested Farage as British ambassador to the U.S.

“He would do a great job,” he tweeted.

Farage told Fox News that the reported red line from the British government reflects not just a nervousness about Farage, but also about Trump.

Trump’s visit is expected to be met with significant protests from left-wing activists, promoted by members of the left-wing Labour Party who have repeatedly called for Trump to be uninvited.

Last month, Prime Minister Theresa May was grilled by MPs with calls to scrap the visit, particularly after the controversy surrounding illegal immigration and the separation of families at the U.S.-Mexico border. While she said “the pictures of children being held in what appear to be cages are deeply disturbing,” she defended the Trump visit.