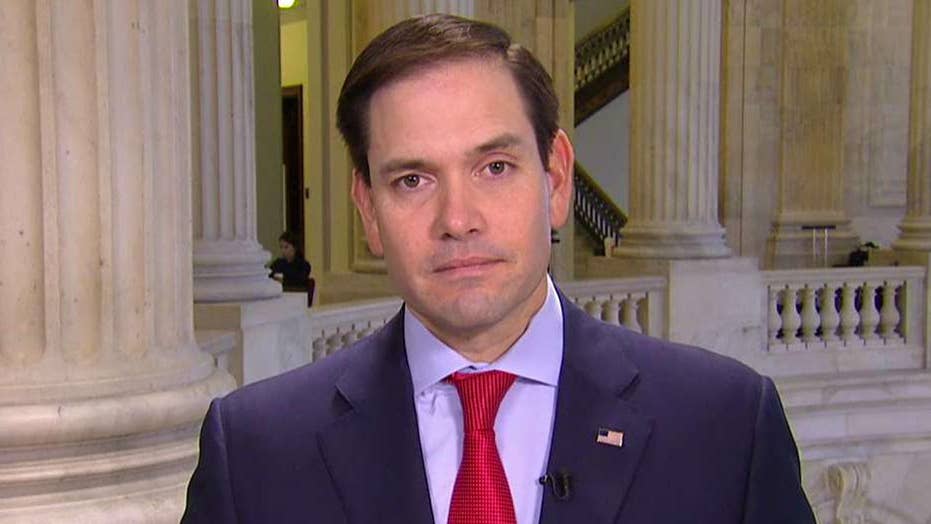 Sen. Rubio on US striking Syria: It was the right choice

President Trump’s decision to strike an Assad airfield drew bipartisan praise from some of his biggest critics – while also renewing the dormant debate over Congress’ role in approving military actions.

Sen. Marco Rubio, R-Fla., who has been critical of Trump’s past statements defending Russia’s Vladimir Putin, had nothing but positive words for the U.S. president on Friday morning. As the Trump administration now takes a firmer stance against Russia’s support for Assad, Rubio told “Fox & Friends” the missile attacks on the airfield thought to be the staging point for this week’s deadly chemical weapons strike was “the right choice.”

“We don’t have 535 commanders-in-chief, we have one,” he said, stressing that the cruise missile strikes do not constitute a declaration of war.

Some lawmakers, though, contend that Congress has a role here – an argument that last played out when Syria action was considered under the Obama administration.

Sen. Rand Paul, R-Ky., and Sen. Elizabeth Warren, D-Mass., a member of the Senate Committee on Armed Services, both called on Trump to come to Congress.

“The Constitution gives the power to authorize the use of military force to the legislative branch. Expanded military intervention in Syria requires action by Congress,” Warren said in a statement. “If President Trump expects such an authorization, he owes the American people an explanation of his strategy to bring an end to the violence in Syria. We should not escalate this conflict without clear goals and a plan to achieve them.”

The War Powers Resolution, enacted in 1973 required the president to consult with Congress before sending U.S. armed forces into combat unless there already had been a declaration of war. The troops could not stay more than 90 days unless lawmakers backed the decision. The law also sought to give the president "leeway to respond to attacks or other emergencies," according to the Council on Foreign Relations.

In February 2015, Obama asked Congress to formally authorize war against the Islamic State. His resolution would have limited authorization to three years, with no geographic restrictions for U.S. forces. Congress held a few hearings, but never acted on the proposal.

“Making sure Assad knows that when he commits such despicable atrocities he will pay a price is the right thing to do,” Senate Minority Leader Chuck Schumer, D-N.Y., said in a statement. “It is incumbent on the Trump administration to come up with a strategy and consult with Congress before implementing it. I salute the professionalism and skill of our Armed Forces who took action today.”

His House counterpart, Rep. Nancy Pelosi, D-Calif., also said the strike “appears to be a proportional response to … the regime’s use of chemical weapons.”

However, she noted that if Trump plans to escalate U.S. military involvement in Syria, “he must to come to Congress for an Authorization for Use of Military Force which is tailored to meet the threat and prevent another open-ended war in the Middle East.”

She followed that up with a letter Friday to House Speaker Paul Ryan, R-Wis., calling for the House to be summoned back into session to debate a formal authorization.