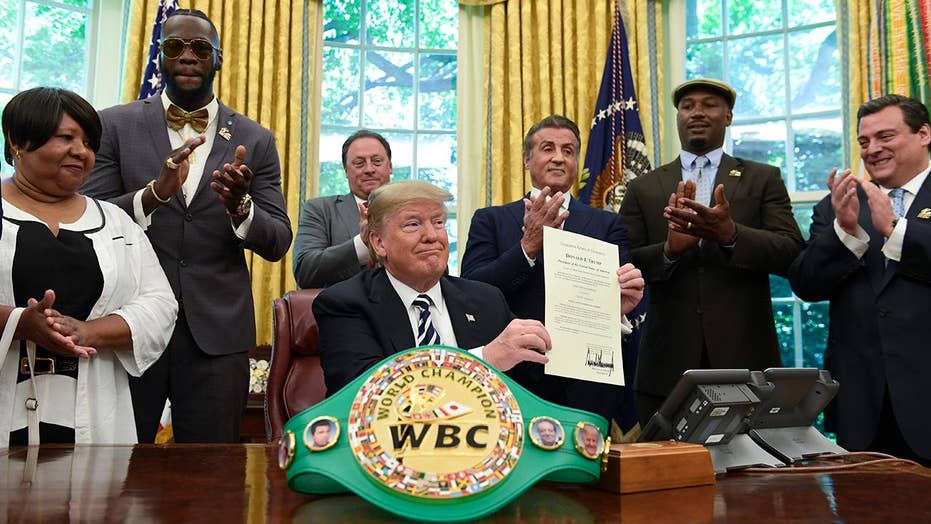 Trump issued an executive grant of clemency to John Arthur 'Jack' Johnson, the first African American heavyweight champion of the world, for a Mann Act conviction.

Johnson, the sport’s first black heavyweight champ, was convicted in 1913 by an all-white jury of violating the Mann Act, which made it illegal to transport a woman across state lines for “immoral” purposes. Johnson fled the country after his conviction, but he agreed years later to return and serve a 10-month jail sentence.

In recent years, Sen. John McCain, R-Ariz. and former Senate Majority Leader Harry Reid, D-Nev., have called for Jackson to be pardoned. But it wasn’t until Thursday when Trump, who was intimately involved with the promotions of Mike Tyson fights in Atlantic City in the 1980s, issued the pardon.

“Jack Johnson! It’s about time,” former heavyweight champion George Foreman tweeted. “2 things he loved Boxing and America. Now he will be rewarded by both.”

“Thank you one and all,” actor Sylvester Stallone, who attended the White House ceremony and urged Trump to consider the pardon, said on Instagram. “Justice has been done! Keep punching.”

Current WBC heavyweight champion Deontay Wilder, who joined Stallone and former champion Lennox Lewis at the White House Thursday, labeled Johnson “a pioneer, not just in this sport, but for African-Americans throughout the country.

“The things that he had to endure, made it possible for me and my family to live the lives we lead today," Wilder said in a statement provided to Fox News. “Everything we do in this sport is in honor of the legacy that he left behind. In many ways, we’re still fighting that same fight that Johnson fought a century ago. We have to continue to try to speak truth to power and keep pushing towards a better tomorrow despite rhetoric that’s meant to split us apart. Hopefully this pardon is something symbolic that can help unify, but the most important thing we can do is stay engaged every day and live our values so that our culture doesn’t repeat these mistakes.”

Documentary filmmaker Ken Burns, who made a much lauded film about the former champion, said the “pardon reminds us of a racist past and how even today racist remarks and coded words are used to imperil African Americans and to advance an Un-American agenda.”

Former two-division title-holder Paulie Malignaggi criticized Trump’s predecessors for not issuing the pardon sooner. “remember when Obama was being petitioned to do this and passed on it?  I do, so don't pretend yous don't.”