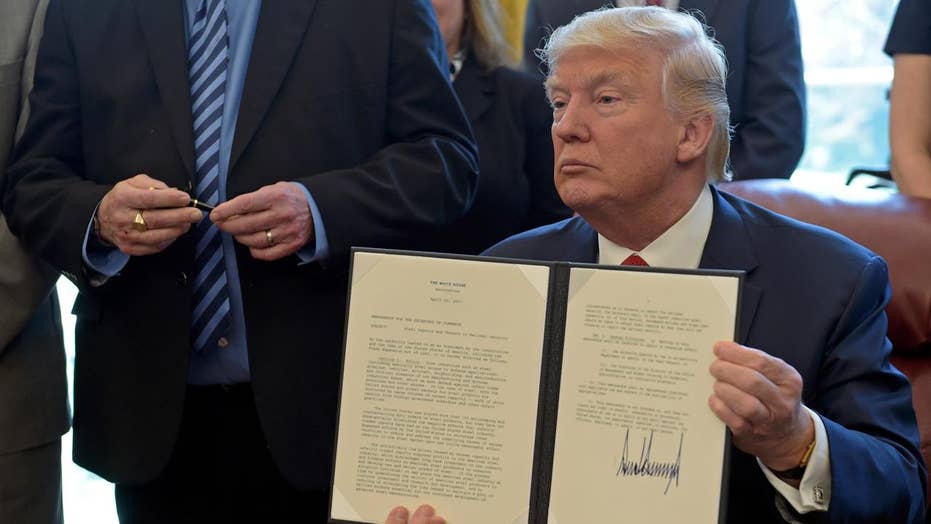 Trump to ramp up executive orders as he reaches 100th day

It’s early March and 2,000 screaming, raucous protesters, many of them Hispanic, line 82nd Avenue along Miami’s Tropical Park. It seems like almost every passing driver honks their horn, apparently in support. A local news reporter makes his way along the rowdy rally and asks a handful why they are there.

“The people need to know this is the president we wanted for our country," Maite Bueno, of Hialeah, offers. "He’s not only going to make America great again, he’s for everybody. People need to wake up!”

Lucy Reyes, speaking with a strong Cuban accent, had a message for the half who disapproved: “He’s not the person that people think he is. He’s a good president.”

That was Day 44 of the Trump administration, which to no one’s surprise who followed the campaign had already been marked by extreme acrimony between Trump and Democrats, Trump and Republicans, Trump and the FBI, Trump and federal agencies like the EPA, Trump and foreign leaders and, especially, Trump and the media.

Days before, Trump had tweeted out, “FAKE NEWS media knowingly doesn’t tell the truth! A great danger to our country!”

The president was trying to redirect attention away from allegations of collusion with Russia to influence the electorate, or otherwise steal the election from Democrat Hillary Clinton.

“The real story,” Trump tweeted, “is all of the illegal leaks of classified or other information. It is a total witch hunt!”

Bannon is seen by Trump's base as the key to his "America First" strategy. (Associated Press)

The Washington establishment hadn’t seen anything like this before.

Often fed by anonymous sources from the DC establishment, the media struck back with juicy reports of constant infighting and incompetence.

Thousands of jobs went unfilled in the executive branch. There was a botched effort to repeal and replace ObamaCare, after the Republican-led Congress had voted 62 times on such bills while President Barack Obama was in office. Charges of nepotism as he elevated his daughter Ivanka and her husband Jared Kushner to important White House posts. Top White House strategist Steve Bannon reportedly clashed with Chief of Staff Reince Priebus.

In late March, a Washington Post headline blared: “Trump’s first 100 days: A big failure, and a new low in the polls.”

Trump's performance has surprised Kesler, who sees positive signs in the nascent administration.

But supporters Fox News has kept in touch with since the campaign were unwavering as Trump approached the 100 day mark of April 29. And this week, the Washington Post's own survey showed that Trump would still best Clinton if a new election were held today.

That may surprise the same critics who predicted he would lose Nov. 8, but it doesn't shock his supporters.

“I think he’s doing really good,” said Bob Holmes, who was featured in global coverage after he offered free Trump tattoos ahead of the New Hampshire primary in February 2016.

Holmes had never voted before Trump came along, because he saw in the billionaire real estate developer a candidate who spoke directly to ordinary Americans. Holmes says he has kept an eye on developments over the first 100 days of Trump’s presidency.

“A few things he’s gotten knocked down," Holmes said. "He’s fighting the fight. The major thing I saw, before he was even sworn in, he was saving thousands of jobs.”

Other supporters were equally patient, even after the failure to repeal and replace ObamaCare. In late March, a woman told a local news reporter at a Trump rally in Lansing, Mich., “I think he’s going to totally repeal it. The press has gotten it wrong all along. And they’ve gotten it wrong again because he knows exactly what he’s doing.”

Such faith is unsurprising with his most ardent backers. But as Trump closed in on the benchmark, there has also been a surprising, albeit tepid, shift in support among mainstream academics and political observers, and even some of his harshest critics in Congress.

In May 2016, as Trump clinched the nomination, Charles Kesler, professor of government at Claremont-McKenna College in Southern California, predicted what a Trump administration would look like.

“It is not the overbearing executive so much as the haphazard one, adrift much of the time, that is the risk," Kesler wrote. "Think Arnold Schwarzenegger in California, or Jesse “the Body” Ventura in Minnesota… Trump is likely to prove less involved than Silvio Berlusconi in Italy, also a billionaire media personality with a brand.”

But nearly a year later, Kesler has upgraded his assessment.

“I'd say I’ve shifted my view to the upside,” said Kesler. “There's more consistency in his fundamental issue positions than I feared at one point there might be. He's working immigration, trade, deregulation, all the things he has been consistently pushing for many years. There are Trump positions and he's making steady progress and I'm encouraged by that. It's possible he could be a successful and even much-admired president.”

Speaking on MSNBC before the election, Harvard historian Niall Ferguson painted a grim picture of the alternatives confronting the American electorate.

“The choice in 2016 is between SNAFU," he said, applying the acronym for situation normal all fouled up to a Clinton victory, "or FUBAR," he continued, using another acronym loosely translated as 'fouled up beyond all recognition.'

"A lot of people are attracted to FUBAR, because they just can't stand any more SNAFU,” Ferguson said.

Ferguson’s pessimistic prognosis changed in early April, after the Trump administration ordered two Navy destroyers to fire 59 Tomahawk cruise missiles at Shayrat airfield, from which Syrian President Bashar Assad was said to have launched his sarin nerve gas attack on the town of Khan Sheikhoun, killing 87 people a week before.

“I think we can now discern the beginning of the improvement in U.S. foreign policy we have been waiting for ever since President Obama packed his bags," he wrote. "A new sheriff is in town and he doesn’t fire blanks.”

Even Trump's two most vocal Republican critics on Capitol Hill praised the president after his unamiguous message to Syria was sent.

“Unlike the previous administration, President Trump confronted a pivotal moment in Syria and took action,” Senators Lindsey Graham and John McCain said in a joint statement. “Building on this credible first step, we must finally learn the lessons of history and ensure that tactical success leads to strategic progress.”

Some experts are optimistic President Trump will do just that.

“I think he’s had more success than the media gives him credit for,” said Arthur Herman, a senior fellow at the Hudson Institute. “What we have is an American president who I think now gets that you have to act with force sparingly and judiciously, but in ways that send a message.”

The Syrian airstrikes led some critics to argue Trump was selling out on key campaign messages regarding the use of force abroad and nation-building. Herman disagrees.

“There is a fallacy among pundits, foreign policy experts and the media that military action and diplomatic action are somehow separate tracks," Herman said. "The idea that what Trump is doing is reversing himself by getting involved is incorrect. This was clearly a message about the use of weapons of mass destruction, and making it clear that, unlike his predecessor, he is not afraid to use military muscle to force the diplomatic track forward.”

As for Holmes, the tattoo artist and Trump supporter, the messages from Syria and North Korea are clear.

“Syria was the right move," he said. "Maybe the rest of the world is pissed off, but maybe that’s the point. The rest of the world didn’t respect or fear us. Nobody is stepping up and stopping North Korea. We shouldn’t have to put up with the short little fat dude [North Korean leader Kim Jong Un]. He needs to be put in his place.

"That’s why Trump was voted in," Holmes said. "He’s showing everybody we’re not going to take it anymore.”

Yet, with Trump's muscular foreign policy manifested in tough talk directed at Syria and North Korea, some critics fear his administration could be leading us into World War III. Not so, says Kesler.

"He’s got sober, scholarly, not militant generals who he is listening to, a lot. They don’t want to get into a war over Syria or North Korea,” said Kesler.

There is another concern about Trump that has recently taken hold among some supporters who were initially drawn to his pledge to "drain the swamp," and take on Washington's establishment. Bannon, the face of Trump's populist broadside at the clubby culture of Capitol Hill insiders, has reportedly clashed of late with Kushner and Trump's chief economic adviser, Gary Cohn.

Kushner and Cohn are seen by critics as globalists out to undermine the message and platform that propelled Trump to the White House. If they and not Bannon have the commander-in-chief's ear, some fear, the Trump administration could take a leftward turn.

Holmes and other long-time supporters, like Jack Morgan, a Trump campaigner from southwestern Virginia, don’t buy it.

“I can honestly say I'm only seeing it on social media and TV,” Morgan said. “His actual base, the ones that really were behind him, and not just came along for the ride, are still solidly behind him, at least in SWVA. He's already begun cutting EPA regulations for the coal industry and jobs are coming back so people are happy with that. I feel sure the ones complaining were never his base.”

Kesler sees Trump as adjusting pragmatically to the position.

“He started out as a complete Washington amateur, and he has come to rely on people who have been there before more than he thought he would do,” said Kesler. “But he’s still being pretty selective about who he admits into his administration.”

“For big, complex issues it’s taken more effort than Trump realized, but he has patience to put the deal together,” said Herman. “The media narrative that things are going haywire completely misses the mark.”

Kesler sees something deeper going on with Trump, also missed by the mainstream media narrative.

“Anti-Communism changed conservative foreign policy,” said Kesler. “And libertarianism changed Republican affection for high tariffs. He is fusing the Republican Party with some elements of the conservative movement, and he might change the movement more than it changes him.”

In doing so, Trump is proving he is the outsider some supporters had hoped for, said Herman.

“Trump is not a politician. He was not born and bred in the Washington cabbage patch,” said Herman. “What we may find as time goes on with ObamaCare, tax cuts, the question of the Mexico border wall, that in all these kinds of questions Trump has a better idea of how to put together a deal than Republicans and Democrats.”