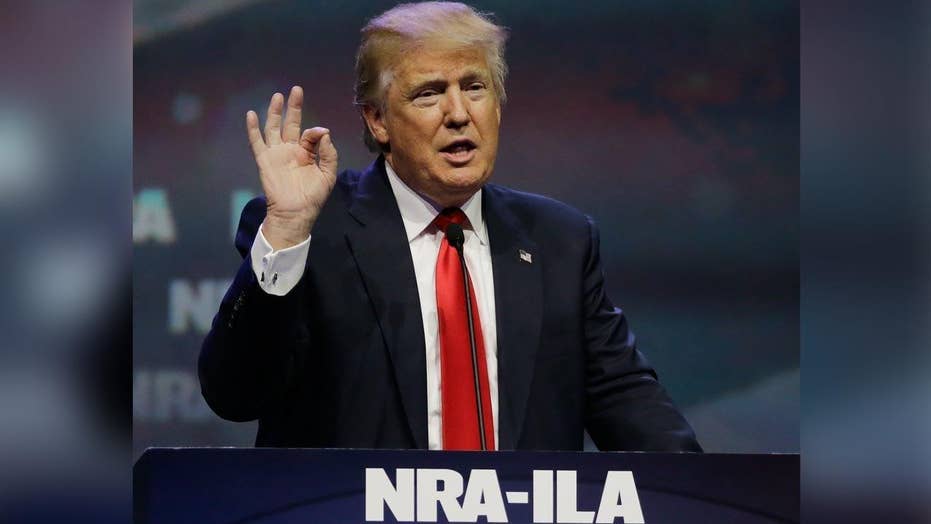 The National Rifle Association threw its weight Friday behind Donald Trump, as the presumptive Republican presidential nominee personally assured the group’s members he would protect Second Amendment rights if elected – and claimed that likely Democratic rival Hillary Clinton would threaten them.

The billionaire businessman and leaders of the nation’s powerful gun lobby joined forces as they amplified warnings that the Supreme Court vacancy only raises the stakes for gun owners in this election. Trump, speaking to the NRA-ILA (Institute for Legislative Action) forum in Louisville, Ky., even challenged Clinton on Friday to release a list of her potential Supreme Court nominees, after he did so earlier this week.

“I would like for Hillary Clinton to put a list together also, and I want to see what the list consists of,” he said. “It will be day and night, it won’t be good for the people in this room and the country.”

He charged, “Hillary Clinton wants to abolish the Second Amendment.”

In a written statement, Cox also said: "The stakes in this year's presidential election could not be higher for gun owners. If Hillary Clinton gets the opportunity to replace Antonin Scalia with an anti-gun Supreme Court justice, we will lose the individual right to keep a gun in the home for self-defense. …  So the choice for gun owners in this election is clear. And that choice is Donald Trump.”

The NRA's endorsement comes significantly earlier in the election cycle than previous endorsements by the group. The group did not endorse 2012 GOP nominee Mitt Romney until October 2012.

However, officials told Fox News ahead of the announcement there is an excitement for Trump among their members that they did not see for Romney or 2008 nominee Sen. John McCain, R-Ariz.

Trump, who noted he has a concealed-carry permit (“Boy would I surprise someone if they hit Trump”), on Friday called for making it easier for law-abiding citizens to carry guns for self-protection, saying they could help prevent terrorist attacks and mass shootings.

On the San Bernardino terrorist attack, he said, “if we had guns on the other side [of the attack], it wouldn’t have been that way …boom,” before pledging to abolish gun-free zones.

He joined the NRA in warning of dire consequences for the Second Amendment if Clinton is elected president.

“Crooked Hillary is the most anti-gun, anti-Second Amendment candidate,” he said. “She wants to take your guns away from you, just remember that.”

Clinton will appear Saturday in Florida with the mother of Trayvon Martin and other parents who have lost children to gun violence. She's become a forceful advocate for restrictions meant to reduce the nation's 33,000 annual gun deaths.

Trump said that the only way to prevent scrapping gun rights was to vote for him in November.

Trump also blasted the Clintons as “heartless hypocrites” for having armed bodyguards while calling for gun restrictions.

Clinton fire back against Trump's speech late Friday, tweeting that it is possible to prevent gun deaths while respecting the Second Amendment.

Trumps’ pro-gun stance marks a change from 2000, when Trump wrote in a book that he supported the ban on assault weapons as well as a slightly longer waiting period for gun purchases. After the 2012 shootings in Newtown, Connecticut, Trump tweeted that “President Obama spoke for me and every American in his remarks.”