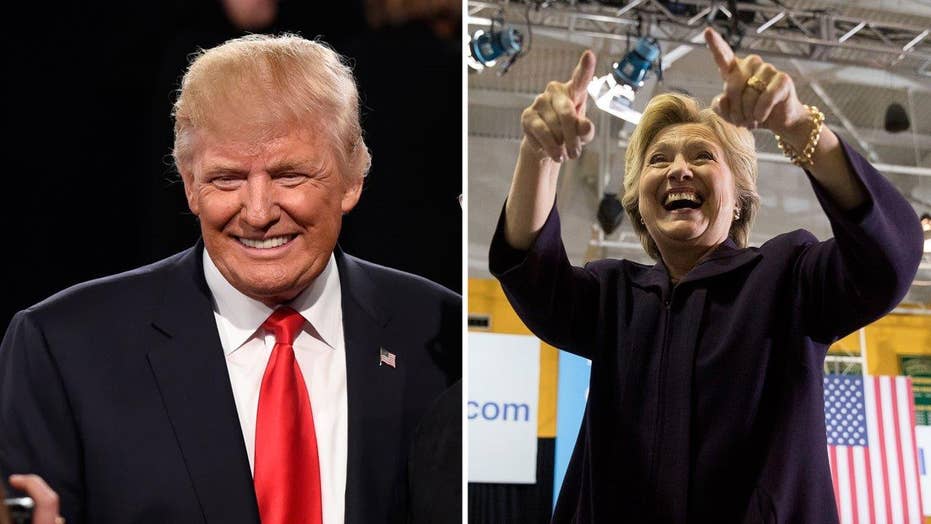 Republican presidential nominee Donald Trump warned his supporters Monday to keep a close eye on the polls so the "election is not stolen from us," while Hillary Clinton hit her opponent with allegations he uses Chinese steel in his construction projects the day after a raucous second presidential debate.

Trump told supporters at a rally in Wilkes-Barre Township, Pa., that he wanted every vote "counted 100 percent" on Nov. 8, adding that they had to be vigilant so the White House is "not taken away from us."

He repeated his claims that the "system is rigged," adding that there was "no way" he is down in the polls in Pennsylvania.

The celebrity businessman also told supporters that as the election draws closer, he'll make "three to four" campaign stops a day, and in his final week may do up to six campaign events.

The Wilkes-Barre event was the second stop of a self-declared victory lap across the battleground state of Pennsylvania on Monday.

"Hillary Clinton is highly over-rated," he told a crowd at an earlier campaign event in Ambridge, Pa.. "All crooked Hillary could do was talk about small, petty things last night. ... She wants to divide America. I want to bring us together."

Trump also continued to repeat claims he made the night before that former president Bill Clinton was a sexual predator whose wife attacked the victims, insisting his own words in a 2005 audiotape in which he is heard bragging about being able to kiss and grope women because he is a celebrity did not match the Clinton's alleged actions two decades ago.

"I was getting beaten up for 72 hours for inappropriate words, locker room talk, whatever you want to call it," Trump told supporters. "But Bill Clinton has sexually assaulted innocent women and Hillary Clinton was attacking those women viciously."

Clinton spent her first day on the campaign trail after the town-hall style debate in the battleground state of Ohio going after Trump with allegations he uses Chinese steel in his construction projects.

The Democratic nominee raised the charged with campaigning on the campus of The Ohio State University in Columbus, where she urged students to register to vote before Tuesday's deadline.

Clinton said "for his talk of putting America first," Trump doesn't support American industry with his products and projects.

"When China floods our market with steel below price and people like Trump buy, that kills jobs," she said.

She also hit Trump over the comments he made the 2005 tape about women.

"I just happen to think that our athletes and coaches know a lot more about what happens in locker rooms than Donald trump does," Clinton told supporters.

Earlier on Monday, Trump clashed with House Speaker Paul Ryan after the top congressional Republican told rank-and-file lawmakers he will not campaign with the party’s presidential nominee or defend him – and even suggested he’s preparing for a Clinton presidency.

The details of Ryan’s comments came from sources on a conference call late Monday morning for GOP House leaders and rank-and-file members.

Trump has apologized repeatedly for the comments – but despite an aggressive debate performance Sunday where he sought to turn the tables on Clinton, Ryan said on the call he won’t campaign with Trump. According to sources, Ryan and other House GOP leaders also told those on the call to “do what’s best for you in your district” – advice that speaks to their concern about the impact Trump’s controversies could have down the ballot.

Ryan even appeared to signal the White House race might be a lost cause when he suggested in the call that the party should focus on ensuring that Clinton “does not get a blank check with a Democrat-controlled Congress.”

Ryan’s office later said he was not conceding the election's outcome and made clear he wasn’t walking back his endorsement either.

But Trump responded after the call by tweeting: “Paul Ryan should spend more time on balancing the budget, jobs and illegal immigration and not waste his time on fighting Republican nominee.”

Trump however still retained the backing of the Republican National Committee, which has overseen crucial field efforts for the candidate in battleground states. On a conference call with RNC members Monday afternoon, chairman Reince Priebus said the party remains in full coordination with Trump.

"Everything is on course," Priebus said, according to a participant in the call.