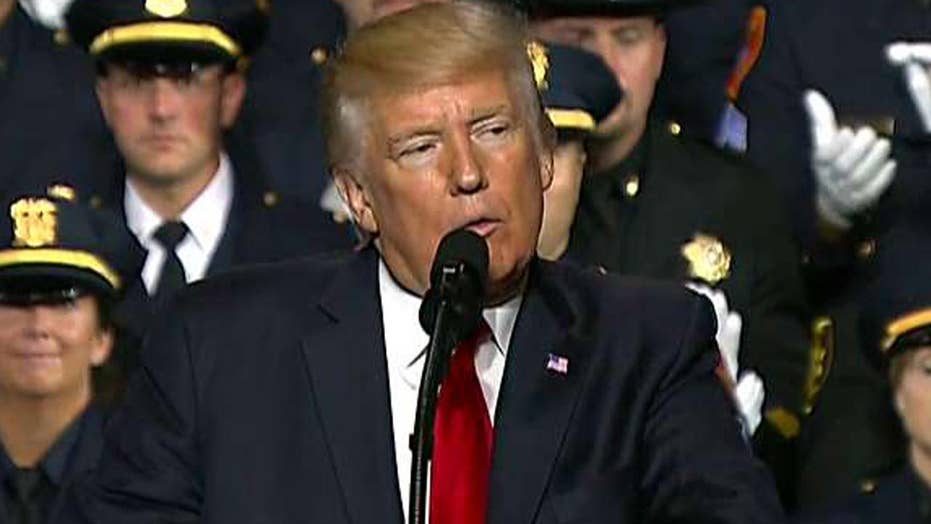 President speaks out about eradicating the MS-13 gang

President Trump sounded the alarm Friday over the violence being inflicted on American neighborhoods by MS-13, vowing to “liberate our towns” from the murderous gang's grip as part of an escalating crackdown by his administration.

The defeat of the latest ObamaCare repeal bill in his rearview, Trump traveled to Long Island to talk about the gang's atrocities and rally support for his immigration enforcement policies.

The president spoke in blunt language to describe the brutality of MS-13 gang members, who have murdered 17 people in Long Island since Jan. 16. The gang, which has Central American ties, is also active in the Washington, D.C., and Los Angeles areas.

"We cannot accept this violence one day more," Trump said.

As he did throughout the 2016 political campaign, Trump also railed against timid politicians who have failed to enforce immigration laws and looked the other way as violent gangs crossed the border.

“They are there right now because of weak political leadership ... and in many cases police who are not allowed to do their job because they have a pathetic mayor or a mayor who does not know what’s going on,” Trump said.

After noting the gang members prefer knives over guns because victims experience more suffering, Trump delivered a message to members.

“We will find you, we will arrest you, we will jail you and we will deport you,” Trump said to applause from the audience of law enforcement officials. He vowed to "destroy the vile criminal cartel, MS-13, and many other gangs."

The visit came after the Senate early Friday morning narrowly defeated the latest ObamaCare replacement bill, in a blow to one of Trump's top campaign promises. But the president brushed off the loss and called on Congress to meet his spending demands to hire as many as 10,000 new Immigration and Customs Enforcement agents and 5,000 new Customs and Border Patrol officers.

The administration also is pushing to boost funding for more administrative law judges and to begin building the border wall.

The House this week voted to allocate $1.6 billion for a border wall.

Trump’s speech coincided with an announcement on Friday that two MS-13 gang members had been arrested in connection with the May murder of a man in Queens.

In June, New York State and federal law enforcement officials disclosed that as part of Operation Matador -- a joint federal-state initiative -- a total of 45 individuals with confirmed gang affiliations were arrested, including 39 affiliated with MS-13.

With Trump in MS-13’s domestic epicenter, Attorney General Jeff Sessions was delivering the administration’s message in El Salvador, where the violent gang is rooted.

“MS-13 is based here in El Salvador, but its tentacles reach across Central America, Europe, and through 40 U.S. states, and to within yards of the U.S. Capitol,” he said in remarks to graduates of the International Law Enforcement Academy.

The administration has taken an aggressive approach toward combating gangs, including establishing a Department of Justice Task Force on Crime Reduction and Public Safety in February. A month later, Sessions issued a memo to all federal prosecutors placing a priority on prosecuting violent criminals.

Sessions was in the country to highlight joint efforts that have contributed to the arrest of 113 suspected MS-13 gang members. According to the Justice Department, an additional 593 gang members were charged Thursday, including many MS-13 members.