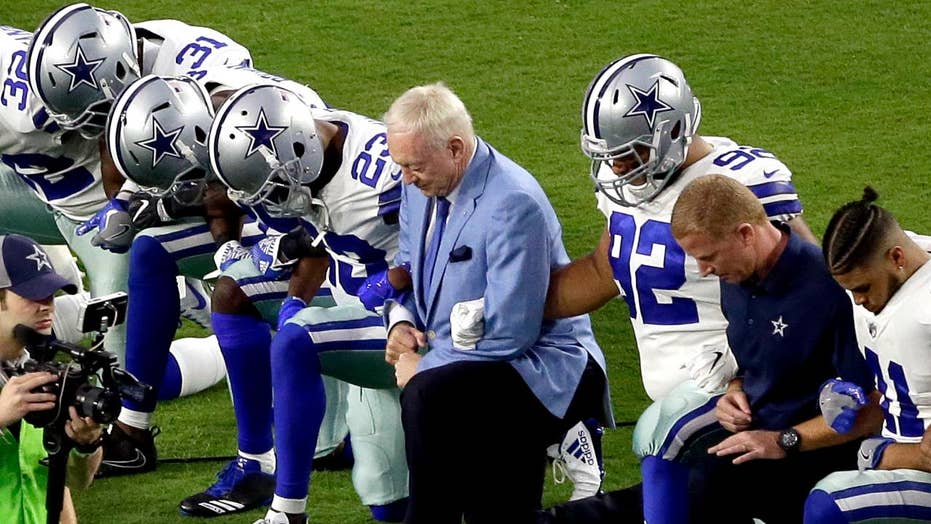 Examining the business impact of the NFL anthem controversy

Hillary Vaughn reports from Los Angeles on how ratings and ticket sales are stacking up compared to previous seasons.

President Donald Trump restated his call for NFL players to stand during the playing of the "Star-Spangled Banner" ahead of this weekend's games, tweeting Saturday night that it was "very important" and calling on players to "Respect our Flag and our Country!"

Trump's message was part of a series of Tweets, many of which defended the administration's response to hurricane damage in Puerto Rico.

Protesting during the playing of "The Star-Spangled Banner" began last season when Colin Kaepernick, then a quarterback with the San Francisco 49ers, declined to stand as a way to bring attention to police treatment of blacks and to social injustice.

During a wide-ranging speech at a political rally in Alabama on Sept. 22, Trump called for NFL owners to fire players who engaged in such a protest. In the days that followed the president issued a series of tweets reiterating his views and calling for a boycott of games by fans.

Criticism from players, owners and fans -- and some praise -- greeted Trump's remarks. The controversy boiled for days and briefly overshadowed other issues facing the Trump presidency, including the failure of congressional Republicans to repeal and replace the nation's health care law, the primary loss in Alabama of Trump's favored candidate, a turbulent hurricane season and the back-and-forth between the U.S. and North Korea over missiles and nuclear weapons.

Relatively few players had demonstrated before Trump's remarks. Last Sunday, more than 100 NFL players sat, knelt or raised their fists in defiance during the national anthem.