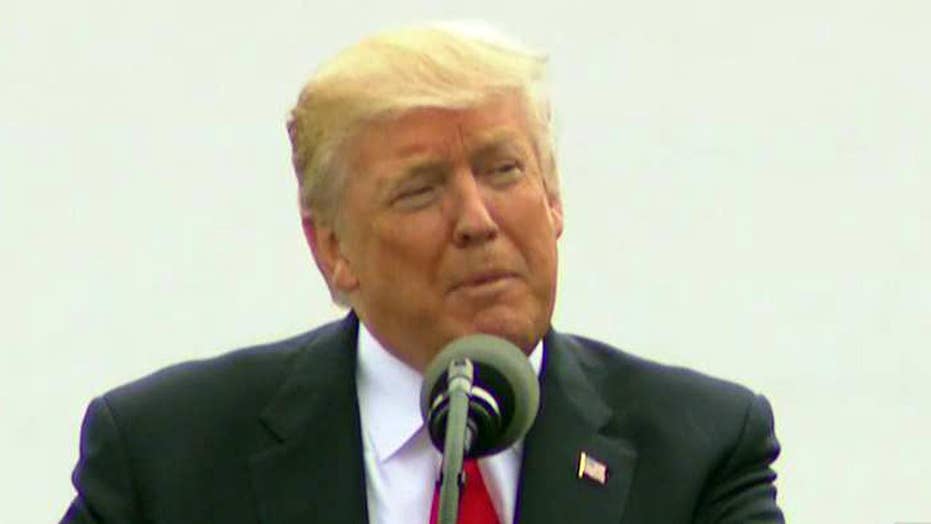 President Trump presented his vision to rebuild America’s infrastructure in Cincinnati on Wednesday as Washington prepared for blockbuster intelligence hearings.

The White House has dubbed this week “Infrastructure Week,” and has held events to promote the administration’s $1 trillion plan to revamp the nation’s infrastructure.

Joined by Republican Kentucky Gov. Matt Bevin and two lieutenant governors from Ohio, the president laid out details to pay for infrastructure improvements with $200 billion in tax breaks, which Trump said he hopes will leverage $1 trillion worth of construction over time.

“The theft of American prosperity has come to a screeching halt and a new era of American greatness is about to begin,” Trump said on Wednesday before a crowd of steel workers, coal miners, farmers and other local workers. “It is time to recapture our legacy as a nation of builders –and to create new lanes of travel, commerce and discovery that will take us into the future.”

Trump began by thanking Ohio for his win saying, “supposed to be close…wasn’t close,” drawing laughter from the crowd. Trump focused on water infrastructure that is in “dire and even desperate” conditions, saying that improvements to the system have been “massively underfunded.”

“More than half of American Steel is produced within 250 miles of where we are standing—and its production depends on the inland system,” Trump said. “Wait until you see what I’m going to do for you steel workers.”

Behind the president during his remarks was a barge of West Virginia coal.

“Coal miners like Trump…so do steel workers,” Trump said. “We are going to stop these other countries from coming in and killing our companies—American steel will get more and bigger.”

Trump also spoke on the “ObamaCare catastrophe,” which he said was created by “congressional Democrats.”

“The problems will only get worse if Congress fails to act—Obamacare is dead,” Trump said, adding that Republicans are working “hard” on getting a “great plan.”

“Now it’s the Senate’s turn to act –I hope they’re going to act in a very positive manner,” Trump said. “The Republican senators are trying hard—the Democrats are really in our way.”

The White House has been fielding questions on the probe into Russian meddling in the 2016 election and potential collusion with members of the Trump campaign for months, and now, officials are directing all inquiries on the matter to the president’s outside counsel, long-time New York-based attorney Marc Kasowitz in an effort to keep the administration on track with policy introduction and implementation.

Earlier this week, Trump unveiled his plan to privatize America’s air traffic control system and separate it from the FAA due to the agency’s “antiquated” practices, and move towards a system that could keep pace with the fast-changing aviation industry.

The infrastructure plan was one that could have received bipartisan support, but based on Democrats’ reaction to the president’s budget for FY18, that does not seem likely.

In January, Senate Minority Leader Chuck Schumer, D-N.Y., rolled out his version of a $1 trillion infrastructure plan that would create 15 million jobs over the next 10 years.

Schumer said that after meeting with Trump, he seemed “willing” to work moving forward, and called on Republicans in both the House and the Senate to “get on board.”

Senate Majority Leader Mitch McConnell, in January, was against borrowing “a trillion dollars,” saying Schumer’s plan was a “replication” of the Obama stimulus package in 2009. Since then, McConnell has said he looks forward to working with the administration to “protect and improve” infrastructure that “serve people and jobs across the country.”

But on Wednesday, the White House said that the “difference” between the presidents’ proposal and Obama’s stimulus is the “focus on accountability of how federal tax dollars will be spent,” and that the stimulus approach resulted in states substituting federal highway dollars for state dollars.

“Working with states, local governments, and private industry, we will ensure that these new federal funds are matched by significant additional dollars for maximum efficiency and accountability,” Trump said.

Trump deviated from infrastructure and spoke on combatting terrorism, his decision to exit the Paris Climate Accord, and touted the administration’s plan to give the “largest tax cut in history.”

“We’re getting rid of regulations and streamlining approval processes, expediting environmental reviews—thousands and thousands of big, big jobs, thousands of them are being approved rapidly,” Trump said.