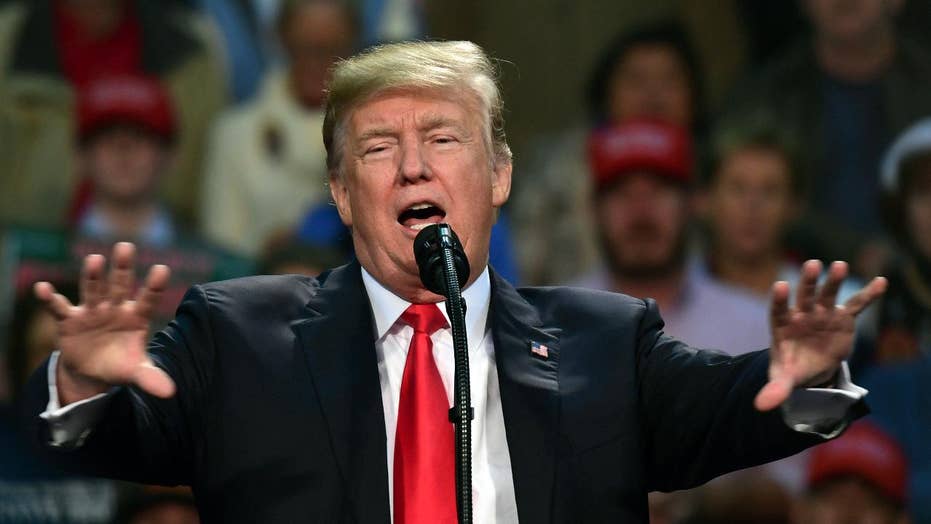 A look at the biggest moments from the event.

President Trump on Saturday continued his full but at-distance support for Roy Moore ahead of the Alabama Senate race, saying the Republican’s opponent will “always vote against what we must do for our country.”

In an early morning tweet, Trump boasted about the support for Moore at his rally Friday night in Pensacola, Fla.

“A big contingent of very enthusiastic Roy Moore fans at the rally last night,” Trump wrote Saturday morning. “We can’t have a Pelosi/Schumer Liberal Democrat, Jones, in that important Alabama Senate seat. Need your vote to Make America Great Again! Jones will always vote against what we must do for our Country.

Trump’s support of Moore comes just four days before Alabama voters hit the polls on Tuesday. However, he is not campaigning in Alabama for Moore, despite spending this weekend in nearby Mississippi and on the Florida panhandle.

The president originally supported Moore’s opponent in the Alabama special election, Sen. Luther Strange, but in the closing weeks has fully endorsed Moore, a firebrand social conservative whose campaign has been severely damaged by allegations of sexual misconduct about 30 years ago.

Last week, Trump endorsed Moore via Twitter and the Republican National Committee again started giving money to the Moore campaign – about $170,000 with Moore now 3 percentage points ahead of Jones, according to the RealClearPolitics.com polls average.

Despite their concerns about Moore, some Republicans appear to have taken the position that they cannot afford to lose the Senate seat, formerly held by Republican Jeff Sessions, considering the GOP has just a 52-48 majority in the chamber.

“GREAT EVENING last night in Pensacola, Florida,” Trump also tweeted Saturday morning. “Arena was packed to the rafters, the crowd was loud, loving and really smart. They definitely get what’s going on. Thank you Pensacola!”

At Friday’s rally, Trump urged his supporters to vote for Moore, saying “we need somebody in that Senate seat who will vote for our ‘Make America Great Again’ agenda.”

In the same speech, he called Jones “a liberal Democrat who is completely controlled by Nancy Pelosi and Chuck Schumer.”

Trump will visit Mississippi later Saturday to attend opening-day events at the new Civil Rights Museum in Jackson. His arrival has sparked controversy from several speakers and civil rights leaders -- including Georgia Democratic Rep. John Lewis who are planning to boycott the event.

Trump is expected to be met by protesters when he arrives to speak at a private event before the public ceremony.