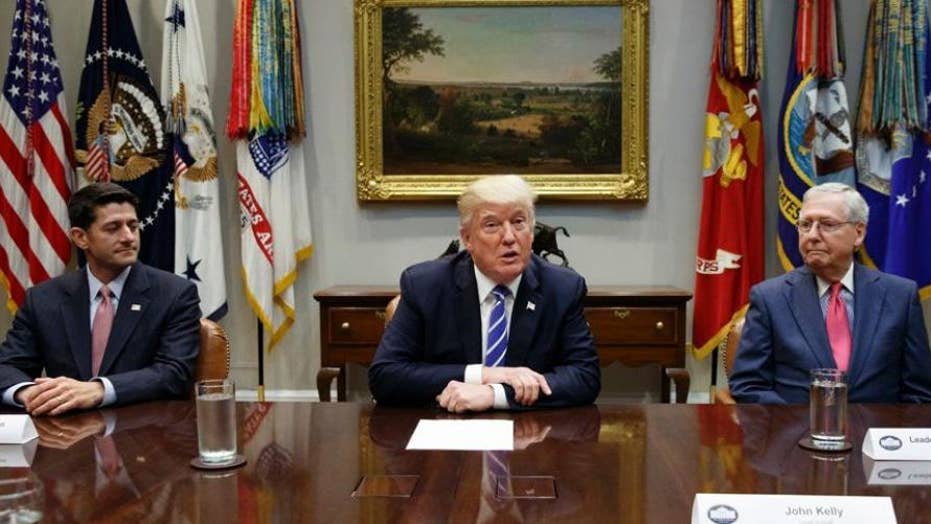 President Donald Trump and top Republican congressional leaders will plot the 2018 political agenda in January, gearing up for more legislative achievements in the wake of the successful passage of the tax reform.

House Speaker Paul Ryan, R-Wis., and Senate Majority Leader Mitch McConnell, R-Ky., will be hosted by Trump at the at the Camp David presidential retreat in Maryland early January, the White House said.

The focus will be on the possible legislative initiatives in 2018 before the political winds shift to the midterm elections, potentially disrupting the legislative process amid fierce all-out elections across the country.

The gathering follows the first big legislative achievement for the Trump administration and Republicans in Congress who passed the $1.5 trillion tax plan this month that decreased individual tax rates for the middle class and axed taxes on corporations.

It is expected that health care reform will dominate the talks in January, as the passed tax cut bill repealed only the requirement, as part of the Obamacare, that all Americans buy health insurance or pay a fine – while leaving other features of the health care law still in place.

Republicans tried to repeal the Obamacare twice this year – both times coming up short with the votes in Congress to pass the legislation and breaking the promise of swift repeal once the White House is occupied by a Republican.

Already juggling a delicate majority in the Senate, Republicans’ efforts to repeal the law were met with unanimous opposition from the Democrats. But the president expects both sides on the aisle “will eventually come together” to work on creating a new health care plan.

“Based on the fact that the very unfair and unpopular Individual Mandate has been terminated as part of our Tax Cut Bill, which essentially Repeals (over time) ObamaCare, the Democrats & Republicans will eventually come together and develop a great new HealthCare plan!” Trump tweeted earlier this week.

Other possible ideas for 2018 include an infrastructure bill aimed at upgrading aging roads, bridges and other transportation. The White House reportedly said Trump will release his infrastructure plan in January.

Ryan, meanwhile, might raise the issue of overhauling Medicaid and Medicare and other welfare program, although McConnell was skeptical of such reforms unless they have the support of the Democrats. Trump has signaled that he is open to pursue “welfare reform” next year as “people are taking advantage of the system.”

But as the White House and Republican congressional leaders plot the 2018 agenda, Congress will face a backlog from 2017.

By the end of January, Congress has to agree on a government funding bill to avoid a partial government shutdown. Politicians in Washington will also have to agree on sending additional aid to support the hurricane victims, lifting the debt ceiling, reviving the children’s health insurance program, and coming up with a legislation for the so-called “Dreamers” who were brought to the country illegally as children.