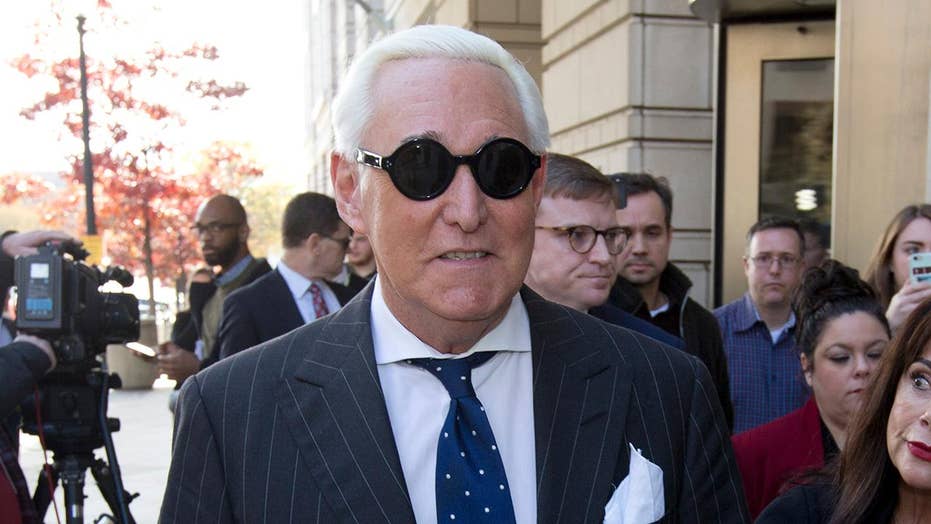 Stone facing decades in prison after being convicted of lying to Congress and witness tampering; David Spunt reports from Washington.

President Trump's fiery reaction to the Justice Department's sentencing recommendation for Roger Stone is stoking renewed speculation that he could end up pardoning his former associate.

Stone is awaiting sentencing for his conviction on seven counts of obstruction, witness tampering and making false statements to Congress on charges that stemmed from former Special Counsel Robert Mueller’s Russia investigation. Federal prosecutors recommended that Judge Amy Berman Jackson sentence Stone to between 87 and 108 months in prison.

"This is a horrible and very unfair situation," Trump tweeted early Tuesday morning. "The real crimes were on the other side, as nothing happens to them. Cannot allow this miscarriage of justice!"

Stone was found guilty in November of providing false statements to the House Intelligence Committee about communications having to do with WikiLeaks, obstructing a congressional investigation of Russian interference during the 2016 presidential election, and witness tampering. Prosecutors claimed that Stone hid the truth to protect Trump's campaign.

The president's reaction to the DOJ's recommendation for Stone — which followed a string of retweets related to the news — was soon met with discussions of a possible pardon. Several replies to Trump's tweet called for a pardon, and various figures in the legal/political sphere speculated that a pardon — or at least a commuted sentence — is in Stone's future.

"Can there be any doubt that a pardon is in the offing?" asked Politico's Josh Gerstein after Trump's tweet, referencing Trump's past pardon of former Maricopa County, Ariz., Sheriff Joe Arpaio.

National security attorney Brad Moss was confident that not only will Stone become a beneficiary of Trump's executive pen, but former national security adviser Michael Flynn could as well. Flynn awaits sentencing for providing false statements to investigators, though that sentencing has been postponed indefinitely as Flynn moves to withdraw his guilty plea.

"The paperwork to commute the sentence of Stone and any sentence for Flynn likely is already drafted," he tweeted.