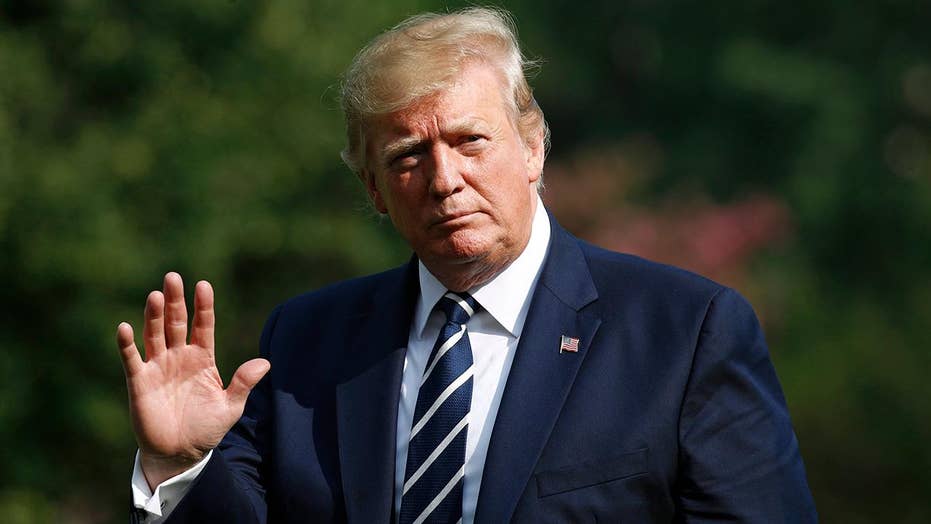 President Trump's feud with four freshman congresswomen known collectively as the "Squad" dragged into its second week as the president sought Monday to flip the script on those accusing him of stirring racial tensions.

In a blistering morning tweet -- and comments afterward to reporters in the Oval Office -- the president accused those same lawmakers of racism.

"The 'Squad' is a very Racist group of troublemakers who are young, inexperienced, and not very smart," Trump tweeted.

The president appeared to elaborate while speaking to reporters alongside visiting Pakistani Prime Minister Imran Khan. The president warned that the congresswomen are "really bad for our country" and made reference to when Rep. Ayanna Pressley, D-Mass., recently reacted to criticism from the Congressional Black Caucus by saying, "We don’t need black faces that don’t want to be a black voice."

That statement from Pressley came in the midst of an ugly fight with members of the Democratic establishment led by House Speaker Nancy Pelosi, but the two sides united against Trump after he tweeted two weekends ago that the lawmakers should “go back” where they came from and return once they've fixed problems at home (though all but one of the intended targets are from America). Democrats came together to issue a resolution condemning the remarks, which they described as racist.

The freshman lawmakers -- Reps. Alexandria Ocasio-Cortez, Ilhan Omar, Rashida Tlaib and Pressley  -- have kept up the criticism of Trump ever since, especially after a rally crowd broke out in chants of "send her back" last week. Trump later distanced himself from that chant, which had been directed at Omar, who was born in Somalia.

"The President is sowing violence," Ocasio-Cortez tweeted Monday, accusing him of "authoritarian behavior."

Omar over the weekend called him a “racist president” who “wants every black/brown person deported and Muslims banned.”

Trump, speaking in the Oval Office, said that the congresswomen "must hate our country," and that they were doing harm to their colleagues on the left.

"I think they're very bad for the Democratic Party," Trump said.

"When they talk about disgusting people, when they talk the way they talk," the president said, "it's not what our country's all about."

Meanwhile, Trump insisted there was “no racial tension,” and that “we have fantastic relationships with the African-American community.”