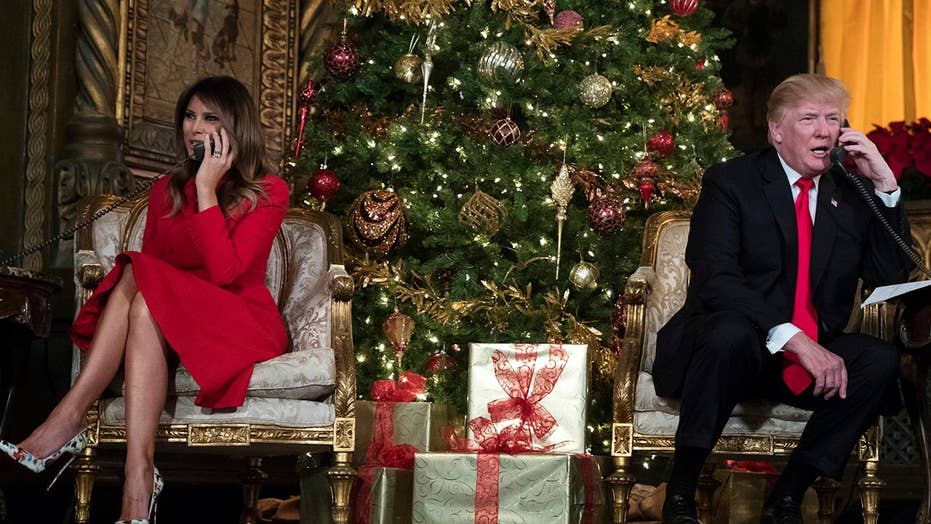 WEST PALM BEACH – President Donald Trump and members of his family wrapped up Christmas at their Mar-a-Lago club on Monday, while also spreading some holiday cheer by providing a feast to the various law enforcement and military service members protecting the first family during their visit.

“I hope everyone is having a great Christmas, then tomorrow it’s back to work in order to Make America Great Again (which is happening faster than anyone anticipated)!" the president tweeted in the evening, after a day with his family.

Earlier on Christmas morning, the president and first lady Melania Trump released a video message, with Mrs. Trump saying "at this time of year, we see the best of American and the soul of the American people." President Trump added his own remarks, calling on Americans to "renew the bonds of love and good will between our citizens —and most importantly we celebrate the miracle of Christmas."

“For Christians we remember the story of Jesus, Mary and Joseph that began more than 2,000 years ago. As the book of Isaiah tells us, for to us a child is born, to us a son is given and the government will be on his shoulders and he will be called Wonderful Counselor, Mighty God, Everlasting Father, Prince of Peace. This good news is the greatest Christmas gift of all, the reason for our joy and the true source of our hope.”

His Monday remarks re-emphasized the Christmas comments he made on Sunday night, when he appeared to take credit for what he views as his successful role in making the holiday merry again.

“People are proud to be saying Merry Christmas again,” the president tweeted on Christmas Eve. “I am proud to have led the charge against the assault of our cherished and beautiful phrase. MERRY CHRISTMAS!!!!!”

Meanwhile, administration sources confirmed to Fox News that the president also provided and paid for hundreds of Christmas dinners served up to the U.S Secret Service agents and officers, military service members and Palm Beach County sheriff deputies who were working Christmas Day at Mar-a-Lago.

Described as a “Christmas feast," served in the Mar-a-Lago ballroom, the buffet meal included a menu of turkey, stuffing, potatoes and dessert. The buffet was offered from the early afternoon into the evening, in an effort to cover two of the shifts for security personnel working the holiday.

Earlier in the morning, the first lady snapped a festive and widely circulated selfie on social media. Using a Snapchat filter, the image showed her wearing a Santa hat with illuminated, flying reindeer and the caption #MerryChristmas.

The president had on otherwise quiet official day on Monday.  He was briefed earlier in the day about a suicide bombing in Kabul, Afghanistan, that killed at least six people. The Islamic State group claimed responsibility for the attack.