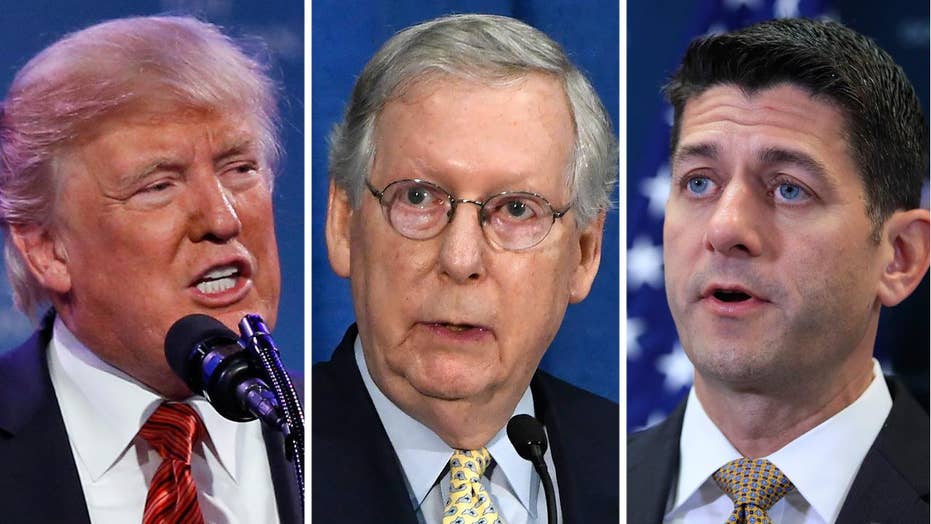 The president had been relatively quiet on Twitter this week after returning to Washington from his 17-day “working vacation” at his property in Bedminster, N.J. But he returned to the platform Thursday, in part to respond to criticism in the media over his Phoenix rally speech.

In a cryptic dig at Clapper, he wrote: "James Clapper, who famously got caught lying to Congress, is now an authority on Donald Trump. Will he show you his beautiful letter to me?"

Clapper, now a CNN analyst, had gone on the network after Trump's Tuesday night rally to question the president's "fitness" for office. Trump’s Twitter reference to “lying” referred to Clapper’s 2013 apology for telling Congress the NSA doesn’t gather data on millions of Americans. It's unclear what letter Trump was referring to.

While going after the Obama-era official, Trump also called out Senate Majority Leader Mitch McConnell and House Speaker Paul Ryan -- despite the White House earlier attempting to ease tensions with McConnell by saying the two “remain united” on many legislative items.

"The only problem I have with Mitch McConnell is that, after hearing Repeal & Replace for 7 years, he failed!That should NEVER have happened!" Trump tweeted, referring to health care legislation.

He also wrote: “I requested that Mitch M & Paul R tie the Debt Ceiling legislation into the popular V.A. Bill (which just passed) for easy approval. They ... didn’t do it so now we have a big deal with Dems holding them up (as usual) on Debt Ceiling approval. Could have been so easy –now a mess!”

It's unclear whether that strategy would have worked for a debt ceiling increase. Some Republicans in the House would have balked at not having a clear path to cutting spending attached, leaving GOP leaders looking for Democratic votes.

While going after Democrats, Trump seemed Thursday to once again put pressure on McConnell and Ryan.

The feud between McConnell and Trump began when McConnell criticized the president for having “excessive expectations” about the legislative process, after Congress failed to deliver the votes on a plan to repeal and replace ObamaCare ahead of their August recess. Trump repeatedly said he was “very disappointed in Mitch,” and reportedly had a “profane shouting match” over the phone on Aug. 9.

TRUMP, MCCONNELL PORTRAY THEMSELVES AS 'UNITED' AFTER RIFT

This week, the two have attempted to make up publicly.

McConnell also insisted that he and Trump were “committed” to working together.

“We have a lot of work ahead of us, and we are committed to advancing our shared agenda together and anyone who suggests otherwise is clearly not part of the conversation,” McConnell said Wednesday.

McConnell and Trump are set to speak for the first time since the call during the first week in September when Congress returns to Capitol Hill.

This week, the president also warned that he would “close down” the federal government if lawmakers do not pass a spending bill to pay for the U.S.-Mexico border wall.

“The Fake News is now complaining about my different types of back to back speeches. Well, there was Afghanistan (somber), the big Rally…(enthusiastic, dynamic and fun) and the American Legion – V.A. (respectful and strong). To bad the Dems have no one who can change tones!”