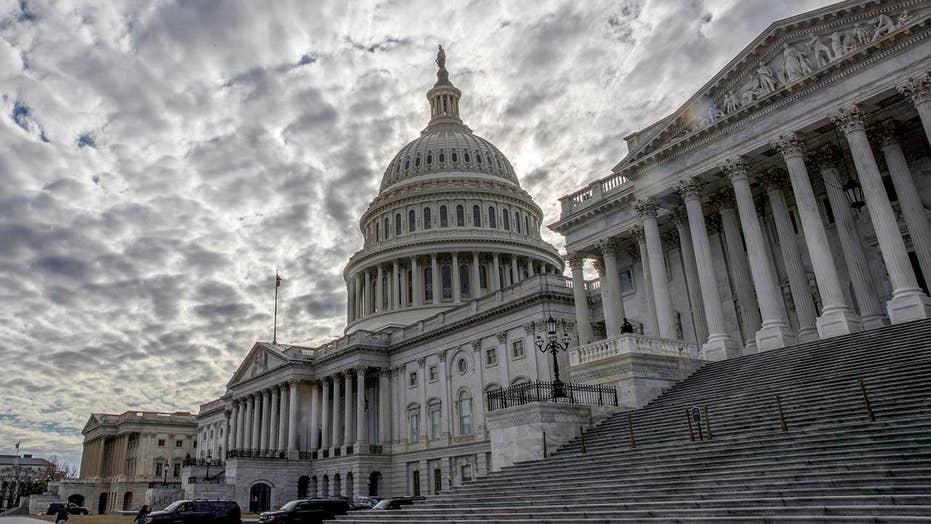 The 'Outnumbered' panel reacts to the announcement by Democrat leaders.

The federal government will be open for business Tuesday after President Trump signed a bill funding the government until Feb. 8.

Trump signed the measure Monday evening, hours after the House and Senate approved the package by wide margins as Senate Democrats backed off their opposition.

Democrats agreed to re-open the government after Republicans assured them the Senate would soon consider legislation that would protect illegal immigrants brought to the United States as children. It was a stark contrast from the Senate Democratic position just a few days ago.

“In a few hours, the government will reopen,” Senate Minority Leader Sen. Chuck Schumer, a New York Democrat, said on the Senate floor on Monday.

The Senate then voted 81-18 to break a Democratic filibuster on the stalled government spending bill. Several hours later, the Senate approved the bill by the same margin and the House followed suit, 266-150.

"I am pleased that Democrats in Congress have come to their senses and are now willing to fund our great military, border patrol, first responders and insurance for vulnerable children,” Trump said in a written statement.

During Monday’s press briefing, White House Press Secretary Sarah Sanders said the administration expects the bill to make it to the president’s desk late Monday and the government to open at full capacity on Tuesday morning.

Sanders pushed back against the notion from Democrats that Trump wasn't doing enough behind the scenes during the shutdown. She said Trump was busy working the phones with lawmakers and Cabinet officials.

“The president was putting pressure and standing firm on exactly what he was willing to do and what he wasn't,” Sanders said. “And it very clearly worked.”

On 'Fox & Friends,' the counselor to the president says a short-term spending bill has nothing to do with the immigration issue.

The funding and reopening of the government would allow U.S. military personnel to be paid, end the furlough of nearly 1 million federal workers and resume all federal services and operations.

But congressional lawmakers made it clear Monday that they’re still faced with challenges, like how to fund hurricane disaster relief and craft a comprehensive immigration reform bill on which both parties can agree.

“We still have a lot more work to do,” said Sen. Joni Ernst, R-Iowa.

The Capitol Visitor Center is empty, as the government shutdown entered its third day.

After days and weeks of blaming and finger-pointing, a bipartisan group of senators met Sunday and brokered the deal in which rank-and-file members would provide the 60 votes in exchange for Senate leaders' promise to immediately proceed to immigration reform.

Democrats largely had opposed the stopgap spending bill because it did not include provisions to protect the illegal immigrants from deportation under former President Barack Obama’s Deferred Action for Childhood Arrivals executive order. Trump last year set a deadline of early March to end the protections, but has indicated he wants to provide permanent protections for the young illegal immigrants -- along with border security, particularly funding for his U.S.-Mexico border walll.

Under the apparent deal to end the filibuster, Schumer said Monday they would negotiate on immigration, and immediately consider such legislation if there’s no agreement by Feb. 8.

However, he also needled Trump, whom he said on Friday rejected his compromise plan that included money for the border wall.

“Today we enter the third day of the Trump shutdown,” Schumer said before saying they would provide the votes to get to the spending bill. Republicans call it the "Schumer Shutdown."

Senate Majority Leader Mitch McConnell, R-Ky., then thanked Schumer and said: “I think if we've learned anything during this process, it’s that a strategy to shut down the government over the issue of illegal immigration is something the American people didn't understand and would not have understood in the future. So I'm glad we've gotten past that.”

With Republicans having just 50 senators available to vote Monday, they needed the support of roughly a dozen Democratic senators to break the filibuster. They got 33.

The 18 senators who didn’t vote to end debate included Republican Sens. Mike Lee, of Utah, and Rand Paul, of Kentucky.

The 15 Democrats in opposition were Sen. Richard Blumenthal and Chris Murphy, both of Connecticut; Cory Booker and Bob Menendez, both of New Jersey; Catherine Cortez Masto, of Nevada; Kirsten Gillibrand, of New York; Mazie Hirono, of Hawaii; Patrick Leahy, of Vermont; Ed Markey and Elizabeth Warren, both of Massachusetts; Jon Tester, of Montana; Ron Wyden and Jeff Merkley, both of Oregon; and Kamala Harris and Dianne Feinstein, both of California. Sen. Bernie Sanders, a Vermont independent, also voted in opposition.

Early Monday, before the votes, the Trump White House and Capitol Hill Republicans cranked up the pressure on Democrats to abandon their immediate demands for immigration measures and vote in support of the temporary spending bill.

“They shut down the government,” White House counselor Kellyanne Conway told “Fox & Friends” on Monday morning. “The pressure is on them.”

Trump tweeted that Democrats shut down the government to appease the “far left base” and are now “powerless” to change course.