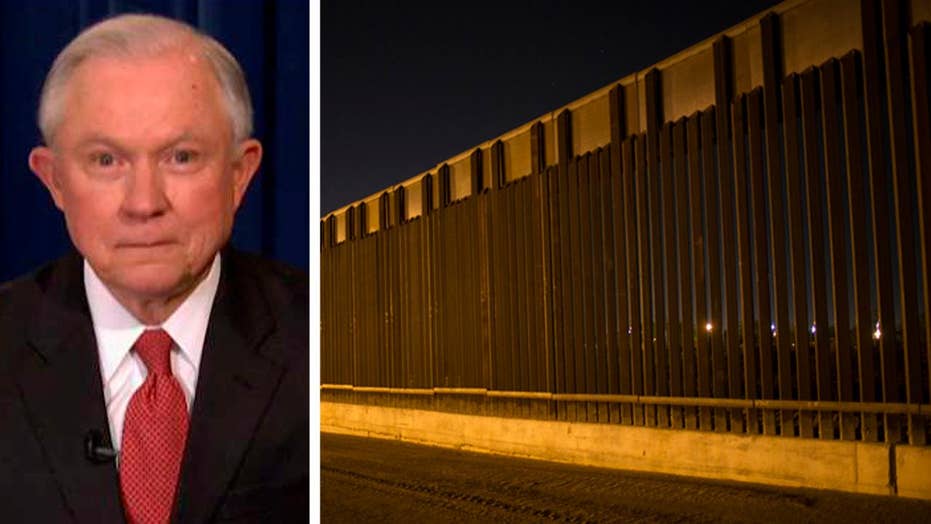 Sessions: Congress can find a host of ways to pay for wall

President Trump and Attorney General Jeff Sessions on Monday pressed their case for building a wall at the U.S.-Mexican border, as a $1 billion funding request for the project threatened to derail negotiations to approve a budget and keep the government open.

Top Democrats in Congress – including House Minority Leader Nancy Pelosi – have said the inclusion of money to fund the border wall would be a sticking point as haggling over the budget continues. But Trump and Sessions contend the building of the “big, beautiful” wall – one of Trump’s most memorable and enduring campaign pledges – is essential for national security.

“The Wall is a very important tool in stopping drugs from pouring into our country and poisoning our youth (and many others)! If,” Trump tweeted Monday morning.

Trump’s use of the word “If” at the end of the tweet seemed to indicate a follow-up message was coming, however, when he tweeted again 90 minutes later it was about an entirely different subject. He eventually finished the thought about three hours after the first tweet was sent.

“…the wall is not built, which it will be, the drug situation will NEVER be fixed the way it should be! #BuildTheWall” Trump wrote.

....the wall is not built, which it will be, the drug situation will NEVER be fixed the way it should be!#BuildTheWall

Earlier on Monday, Sessions told “Fox & Friends” that the Trump administration had “already changed the whole mentality at the border” and dismissed concerns over how the wall would be paid for.

“Congress can find a host of ways to pay for this wall,” Sessions said. “It can be done through people who come to our country through Mexico, fees and costs and even fixing a tax abuse situation that I believe would make a lot of the payment toward fixing it. So there’s no problem with getting this done.”

Sessions said the construction of the wall would be “the end of illegality” and charged that Democrats would be solely responsible in the event of a government shutdown on Saturday due to a disagreement over the border barrier.

“The way the system works is that whenever the government is shut down, people blame the Republicans,” Sessions said. “But lemme tell you, it will be the Democrats that shut this government down to block the funding of the wall.”