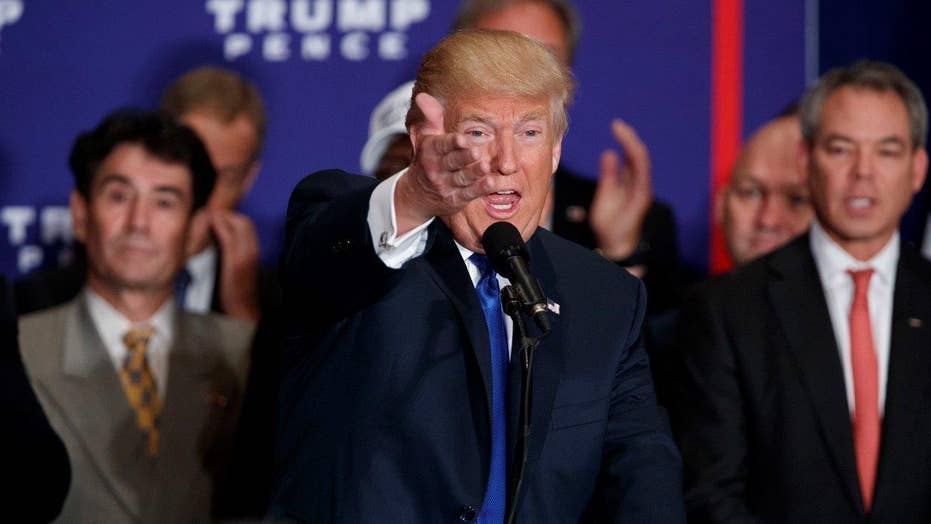 Donald Trump tried to tamp down a newly revived campaign dust-up Friday over his views on President Obama’s birthplace, declaring the president was born in the United States – “period” – after declining to make that statement earlier this week.

The Republican presidential nominee also tried to blame Hillary Clinton for starting the controversy back in 2008, which her team denies. He cast his remarks as a bid to put the issue to rest once and for all, at a time when his poll numbers are rising.

“Hillary Clinton and her campaign of 2008 started the birther controversy. I finished it,” Trump said in Washington, D.C. “President Barack Obama was born in the United States, period. Now we all want to get back to making America strong and great again.”

He spoke at his new Trump International Hotel in Washington, D.C., a visit that began with lengthy remarks from military supporters and veterans. He briefly addressed the “birther” issue at the end.

The statement comes after Trump’s response on the matter in an interview Wednesday revived the issue. In the interview with The Washington Post, Trump was asked whether he believed Obama was born in the U.S. "I'll answer that question at the right time," Trump told the paper. "I just don't want to answer it yet."

Trump’s campaign spokesman, trying to calm the waters, said overnight the Republican candidate now believes Obama was born in the U.S. Campaign spokesman Jason Miller said Trump "did a great service to the country" by bringing closure to the debate.

"In 2011, Mr. Trump was finally able to bring this ugly incident to its conclusion by successfully compelling President Obama to release his birth certificate," Miller said.

But the Clinton campaign seized on Trump’s reluctance to address the issue in his Post interview.

Speaking shortly before Trump across town at the Black Women's Agenda Symposium, Clinton said Friday the Republican nominee was “feeding into” the “bigotry and bias that lurks in our country” – and should apologize.

“Barack Obama was born in America,” she said. “Donald Trump owes him and the American people an apology.”

The dust-up comes as Trump gains on Clinton in national and battleground state polls, even surpassing her in some states.

In the head-to-head matchup, Trump’s up by one point.

Both candidates were fundraising Friday after events in Washington. Clinton has endured a rough week on the campaign trail, after criticizing some Trump supporters last Friday as "deplorables" and then having to take time off from the campaign due to a bout of pnemonia.

She used the birther issue to try and go back on offense.

While Obama was born in Hawaii, Trump several years ago was a key figure in stoking the so-called "birther" controversy. Critics saw it as an attempt to delegitimize the nation’s first black president.

Trump has said repeatedly during the campaign that he no longer talks about the "birther" issue.

The Trump campaign’s statement late Thursday claimed that Clinton launched the “birther” movement during her unsuccessful primary run against Obama in 2008.

"Hillary Clinton's campaign first raised this issue to smear then-candidate Barack Obama in her very nasty, failed 2008 campaign for President," the statement said. "This type of vicious and conniving behavior is straight from the Clinton Playbook. As usual, however, Hillary Clinton was too weak to get an answer."

Clinton has long denied the claim, and fact-checkers previously have found no public evidence that she or her campaign directly pushed the issue. Rather, Trump’s comments appear to refer to reports that Clinton supporters circulated an email during the bitter 2008 primary race questioning Obama’s citizenship.

Yet former McClatchy D.C. bureau chief James Asher said on Twitter Friday that Clinton confidant Sidney Blumenthal in fact “told me in person” that Obama was born in Kenya.

Obama had released a standard short form of his birth certificate before the 2008 presidential election. Anyone who wants a copy of the more detailed, long-form document must submit a waiver request, and have that request approved by Hawaii's health department.

In 2011, amid persistent questions from Trump about his birthplace, Obama submitted a waiver request. He dispatched his personal lawyer to Hawaii to pick up copies and carry the documents back to Washington on a plane.

The form said Obama was born at 7:24 p.m. on Aug. 4, 1961, at Kapiolani Maternity and Gynecological Hospital in Honolulu. It is signed by the delivery doctor, Obama's mother and the local registrar.

At the White House on Friday, Obama declined to comment at length on the issue, saying he’s got other business to attend to – and is confident about where he was born.

Fox News’ Nicholas Kalman and Tamara Gitt and the Associated Press contributed to this report.