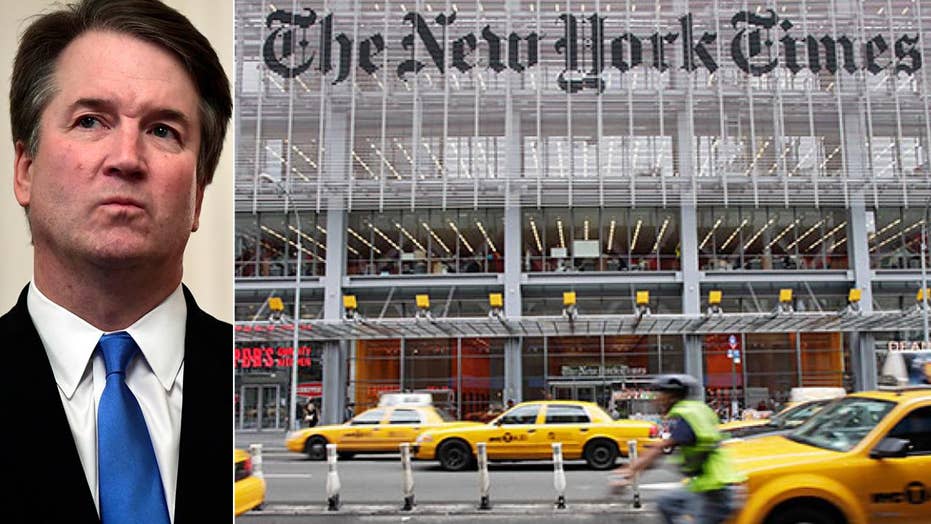 President Trump called out The New York Times on Monday after the newspaper made a major revision to an article about new sexual misconduct allegations against Justice Brett Kavanaugh, saying his Supreme Court pick is the one being "assaulted" by these late-breaking accounts.

Over the weekend, the Times published what was seen as a bombshell report that included a previously unknown allegation against Kavanaugh, only to later update the piece to note friends of the alleged victim said she did not recall the purported sexual assault. In the update, the Times also stated for the first time that the alleged victim refused to be interviewed.

“The one who is actually being assaulted is Justice Kavanaugh - Assaulted by lies and Fake News!” Trump said in a tweet, after quoting a "Fox & Friends" discussion of the Times update. “This is all about the LameStream Media working with their partner, the Dems.”

The original Times piece by Robin Pogrebin and Kate Kelly, adapted from their forthcoming book, asserted that a Kavanaugh classmate, Clinton-connected nonprofit CEO Max Stier, "saw Mr. Kavanaugh with his pants down at a different drunken dorm party, where friends pushed his penis into the hand of a female student."

The Times' revision acknowledged the original article left out a key detail: "Editors' Note: An earlier version of this article, which was adapted from a forthcoming book, did not include one element of the book's account regarding an assertion by a Yale classmate that friends of Brett Kavanaugh pushed his penis into the hand of a female student at a drunken dorm party. The book reports that the female student declined to be interviewed and friends say that she does not recall the incident. That information has been added to the article."

By this time, however, numerous Democratic presidential candidates had already cited the reporting to call anew for Kavanaugh's impeachment.

Even in the wake of the article update, presidential candidate Tom Steyer joined the chorus Monday morning, saying in a statement: "If the only way to get the truth is to launch an impeachment process for Justice Kavanaugh, I support starting that process immediately."

The update on the Times' report came only after The Federalist's Mollie Hemingway, who reviewed an advance copy of the book, first flagged the article's omission on Twitter — prompting other commentators to press the issue.

The president went on to call those behind the story "HORRIBLE PEOPLE," and claimed they were trying to influence Kavanaugh's judicial opinions and should be sued.

"DO YOU BELIEVE WHAT THESE HORRIBLE PEOPLE WILL DO OR SAY," Trump said. "They are looking to destroy, and influence his opinions - but played the game badly. They should be sued!"

This echoed statements Trump made on Sunday in response to the initial Times report.

"Brett Kavanaugh should start suing people for libel, or the Justice Department should come to his rescue. The lies being told about him are unbelievable," the president tweeted. He also accused Democrats and the media of trying to "scare him" into becoming liberal.

Kavanaugh, panned by Democrats during his confirmation process as a hardline conservative, has shown an independent streak during the Supreme Court's last term, siding with liberal justices on several occasions.

Representatives of Sen. Chuck Grassley, R-Iowa, who led the Senate Judiciary Committee when other allegations against Kavanaugh, commented on what they claimed were other deficiencies in the Times reporting. The article included discussion of the previously known allegation that Kavanaugh had put his penis in front of the face of Deborah Ramirez at a college party, but Grassley's team called out the Times for leaving out significant details regarding those allegations.

Fox News' Gregg Re, Andrew Craft and Chad Pergram contributed to this report.