President Trump says running against former VP Joe Biden in 2020 would be a 'dream.' (AP/Reuters)

President Trump ripped Joe Biden in newly aired interview comments, saying running against the ex-vice president in 2020 would be a “dream” and claiming former President Barack Obama “took him out of the garbage heap” in 2008.

“Well, I dream, I dream about Biden. That's a dream,” Trump said in an interview with CBS News, when asked about a Biden bid. “Look, Joe Biden ran three times. He never got more than one percent and President Obama took him out of the garbage heap, and everybody was shocked that he did. I'd love to have it be Biden.”

'President Obama took him out of the garbage heap, and everybody was shocked that he did. I'd love to have it be Biden.'

Obama picked the veteran senator as his running mate in 2008. After serving two terms as VP, Biden was widely floated as a possible Democratic 2016 presidential candidate before he eventually ruled it out.

Biden, 75, has since said he is considering a possible run for the 2020 nomination. On Tuesday, he said at a forum in Bogota, Colombia that he had set himself a deadline of January to make a decision.

"I know I have to make up my mind and I have to do it by January," Biden said, according to USA Today.

Trump, 72, in the interview clip that aired Thursday, said he’d be happy to run against any of the rumored candidates, but he seemed to particularly relish running against Biden.

“I'd like to run against any one of them, but Biden ... by himself could never do anything,” he said. “President Obama took him, made him vice president and he was fine. But you go back and look at how he succeeded in running, when he ran two or three times, I don't think he ever broke one [percent].“

The remarks are part of a bigger war of words between the two. In March, Biden boasted how he would "beat the hell" out of Trump "behind the gym," with Trump responding that if the two fought, Biden "would go down fast and hard, crying all the way." 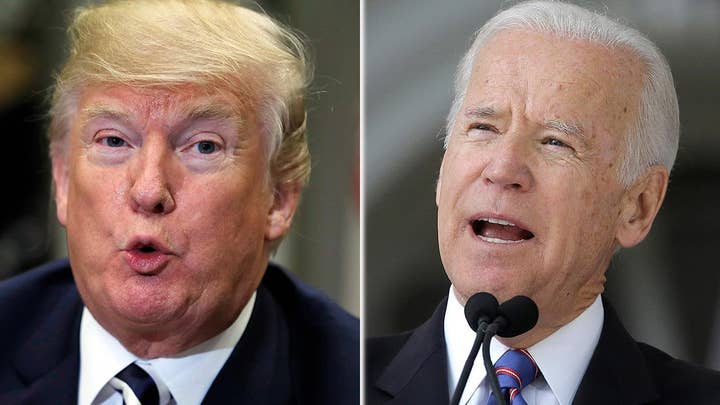 LATEST EXCHANGE BETWEEN TRUMP, BIDEN PART OF A LONG PATTERN OF SCHOOLBOY-STYLE THREATS

In the interview with CBS this week, Trump also addressed the furor over his summit with Vladimir Putin. Trump said he holds the Russian president responsible for Kremlin efforts to meddle in the 2016 presidential election. The remarks come after bipartisan outrage over comments Trump made in Helsinki on Monday in which he indicated he did not agree with the conclusion of intelligence agencies that Russia interfered in 2016.

Trump said he holds Putin responsible "because he's in charge of the country, just like I consider myself to be responsible for things that happen in this country.

"So, certainly as the leader of a country, you would have to hold him responsible, yes."