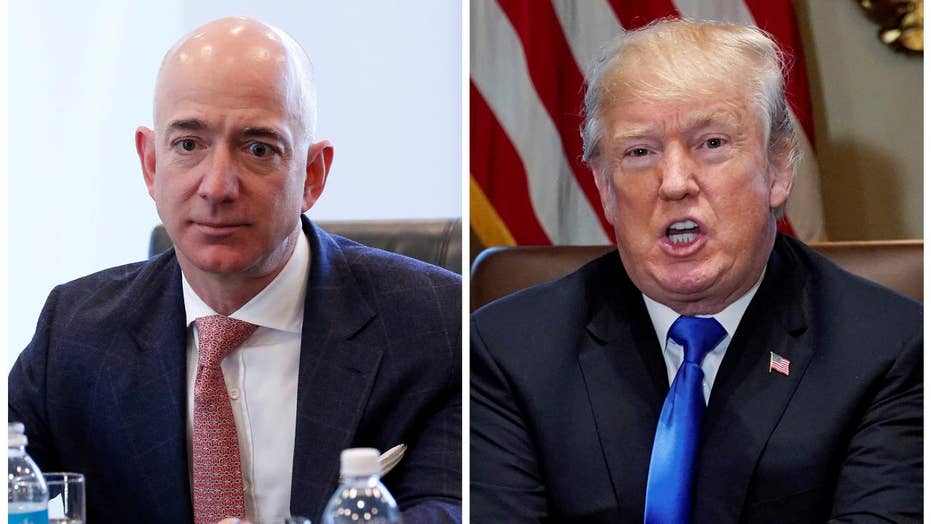 President Trump lashed out at Amazon on Twitter a day after an Axios report said he planned to ‘go after’ the retail giant. Here’s a look back at Trump’s beef with Amazon.

President Trump argued Monday that Amazon’s tax deal is “closing stores all over the country” -- continuing his criticism of the online retail behemoth.

“Not a level playing field,” Trump also said in the tweet that again suggested Amazon has a sweetheart shipping deal with the U.S. Postal Service that “will be changed.”

“Only fools, or worse, are saying that our money losing Post Office makes money with Amazon. THEY LOSE A FORTUNE,” Trump also said in the tweet.

On Saturday, Trump argued that the online retailer’s “scam” shipping deal with the postal service is costing the agency “billions of dollars.”

“It is reported that the U.S. Post Office will lose $1.50 on average for each package it delivers for Amazon. That amounts to Billions of Dollars,” Trump said over two tweets. “If the P.O. ‘increases its parcel rates, Amazon’s shipping costs would rise by $2.6 Billion.’ This Post Office scam must stop. Amazon must pay real costs (and taxes) now!”

The tweets suggest Trump got his information from The New York Times. The tweet also called Washington Post “fake.” The paper, which is owned by Amazon founder Jeff Bezos, continues to be critical of Trump’s presidential campaign and administration.

The president’s tweets on Saturday also suggest Amazon is not paying its fair share of sales tax and that the Post’s “lobbying staff” has “ballooned” in efforts to keep favorable tax laws and the Postal Service deal.

However, federal regulators have found the contract with Amazon to be profitable.

“I have stated my concerns with Amazon long before the Election,” Trump tweeted Thursday. “Unlike others, they pay little or no taxes to state & local governments, use our Postal System as their Delivery Boy (causing tremendous loss to the U.S.), and are putting many thousands of retailers out of business!”

The Post and Bezos have responded to Trump's lobbyist claims in the past by declaring that Bezos is not involved in any journalistic decisions at the paper.

Amazon lives and dies by shipping, and an increase in the rates it pays could certainly do some damage. Amazon sends packages via the post office, FedEx, UPS and other services.

But while the U.S. Postal Service has lost money for 11 years, package delivery -- which has been a bright spot for the service -- is not the reason.

Boosted by e-commerce, the Postal Service has experienced double-digit increases in revenue from delivering packages, but that hasn't been enough to offset pension and health care costs, as well as declines in first-class letters and marketing mail.

Together, letters and marketing mail make up more than two-thirds of postal revenue.

Still, federal regulators have reviewed the Amazon contract with the Postal Service each year and determined it to be profitable.