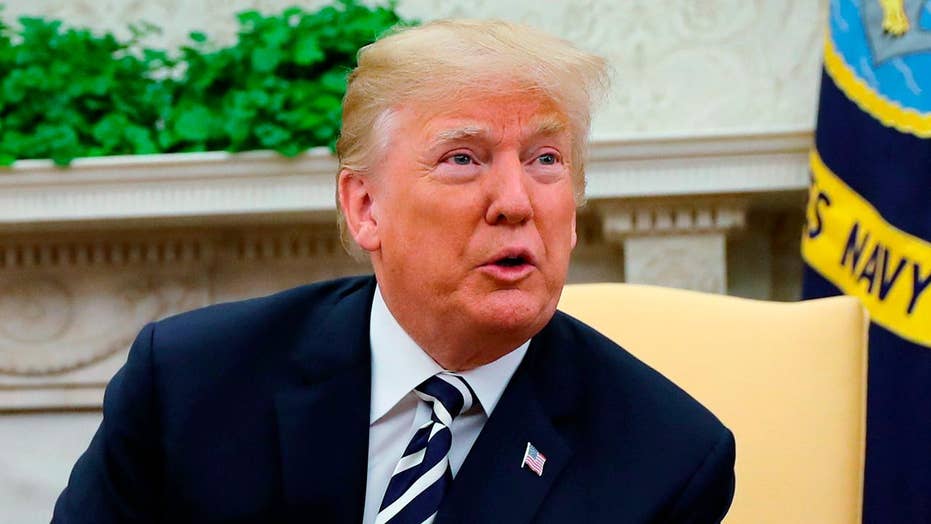 Trump bristles at 'stupid question' about a pardon for Cohen

President Trump scolded ABC News star reporter Jonathan Karl for asking a “stupid question” about whether or not he would be open to pardoning Michael Cohen during Tuesday’s photo spray with French President Emmanuel Macron.

The FBI raided the office and hotel room of Cohen, who is Trump’s personal attorney, earlier this month. Karl, the Chief White House correspondent for ABC News, asked Trump if he would consider pardoning Cohen.

“Stupid question,” Trump responded while looking directly at Karl. “Anybody else, please?”

Karl seemed to take it in stride, as he tweeted details of the exchange.

Cohen's midtown Manhattan office and a Park Avenue hotel room were both searched after prosecutors reportedly received a referral from FBI Special Counsel Robert Mueller -- who is investigating alleged Russian collusion in the 2016 election. In addition, prosecutors reportedly are looking at whether Cohen committed bank fraud, along with possible improper campaign donations to the president.

Deputy Attorney General Rod Rosenstein has told President Trump he is not the target of the investigation into Cohen.

Trump was available to the media ahead of tonight’s first state dinner of the Trump administration, in which President Trump will host Macron. The two apparently have a pleasant relationship, and Trump even joked about wiping dandruff from the French president’s shoulder during the photo spray.

“We have a very special relationship, in fact I’ll get that little piece of dandruff off…we have to make him perfect; he is perfect,” Trump said while playfully wiping Macron’s suit collar.