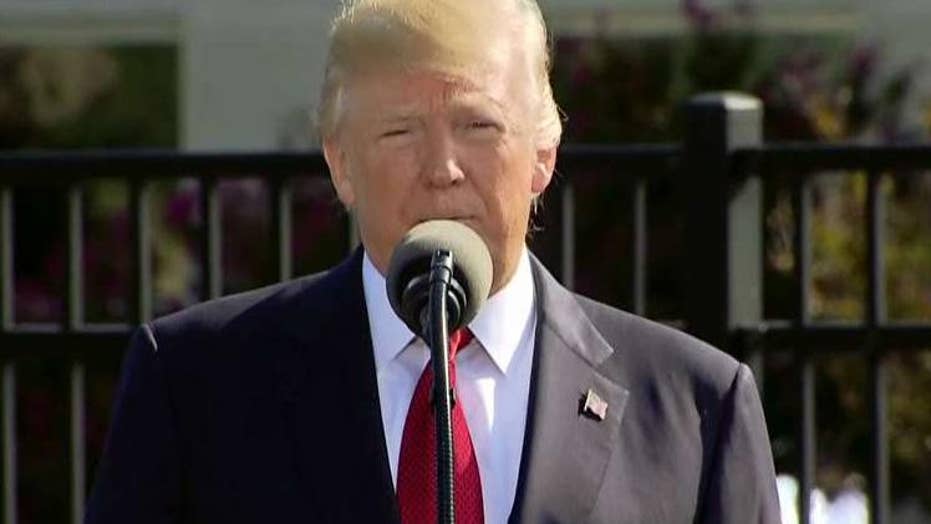 Trump: Our values will endure, our nation will prevail

President Trump commemorated the Sept. 11 attacks for the first time as commander-in-chief on Monday, leading a moment of silence and sharing words of strength on the 16th anniversary of that tragic day.

“We can never erase your pain, but we can honor their sacrifice by pledging our resolve to do whatever we must to keep our people safe,” Trump said, speaking to hundreds of family members gathered at the Pentagon.

The president, a New Yorker, was joined by first lady Melania Trump to observe a moment of silence first at the White House in remembrance of the nearly 3,000 American lives lost in the attacks -- when hijackers led by Usama Bin Laden crashed airplanes into New York City’s World Trade Center, the Pentagon and a field near Shanksville, Pa.

The moment of silence at 8:45 a.m. commemorates the moment the first plane, American Flight 11, struck the north tower of the World Trade Center. The second plane, United Flight 175, struck the south Twin Tower at 9:03 a.m. 16 years ago.

“We never asked for this fight but we are steadfastly committed to seeing it through,” Mattis said at the Pentagon. “We Americans are not made of cotton candy. We’re not seaweed drifting in the current. We are not intimidated by our enemies.”

Mattis added: “Mr. President, your military does not scare.”

Trump took the podium following Mattis’ remarks, honoring the families and the lives lost, and the heroism that day.

“The horror and anguish of that dark day were seared into our national memory forever. Innocent men, women, and children whose lives were taken so needlessly,” Trump said.

The president honored “each family,” ensuring that “no force on earth can ever take away your memories, diminish your love or break your will to endure, and carry on and go forward.”

“On that day, not only did the world change, but we all changed. Our eyes were open to the depths of the evil that we face,” he said.

The president added: “In that hour of darkness, we also came together with renewed purpose. Our differences never looked so small.”

Trump went on to honor the “nearly 5 million” men and women who have joined the ranks in the last 16 years to defend the United States of America. Since 9/11, nearly 7,000 service members have died. The president’s remarks come after the administration announced a renewed Afghanistan policy late last month. A senior U.S. official confirmed to Fox News that the president signed off on sending an additional 4,000 troops to Afghanistan, after apparently listening to appeals from his generals.

“We’re ensuring that they [terrorists] never again have a safe haven to launch attacks against our country,” Trump said. “We are making claim to these savage killers that there is no dark corner beyond our reach, no sanctuary beyond our grasp, and nowhere to hide–anywhere—on this very large earth.”

The president thanked members of the military for their service and said, “America does not bend. We do not waver. And we will never, ever yield.”

Meanwhile, Vice President Pence led the ceremony in Shanksville, where Flight 93 crashed into an open field at 10:03 a.m. 16 years ago. Many believe the passengers on that flight prevented a larger attack by fighting back.

In his remarks, an emotional vice president recalled being on Capitol Hill on 9/11 during what was his first year in Congress. Pence remembered the heroes on Flight 93 that prayed with a phone operator before plummeting to the ground, and assured the family members gathered at the memorial that this was “personal.”

“Among the many lives that were saved by their selfless courage, they might well have saved my own life that day, 16 years ago,” the vice president said, thanking the audience for the “privilege” of speaking. “I will always believe that I and many others in our nation’s Capitol were able to go home that day to hug our families because of the courage and selflessness of the heroes on Flight 93. For me, it’s personal.”

He added: "We will drive the cancer of terrorism from the face of the earth."

As the ceremonies took place in Washington D.C., and Pennsylvania, hundreds gathered at Ground Zero in Manhattan for reading of the names of those who lost their lives 16 years ago.