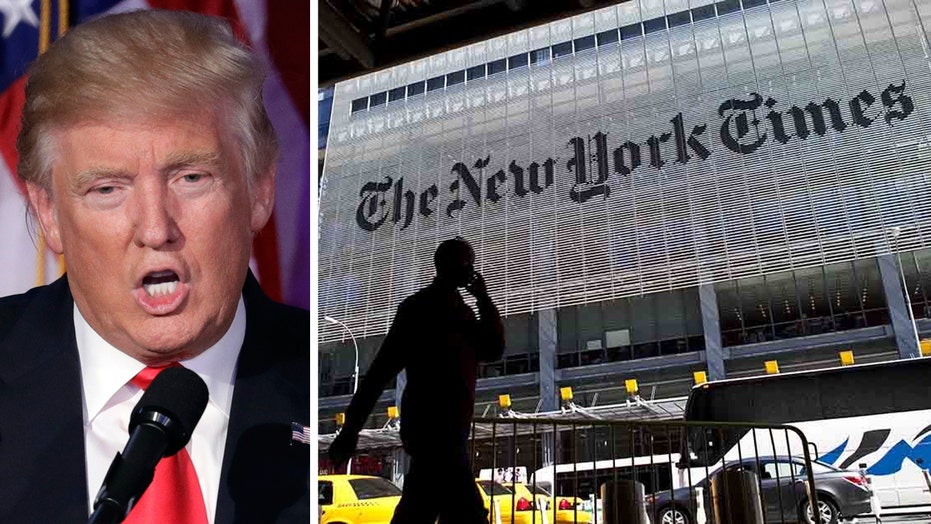 Steve Hilton: The New York Times is damaging its reputation

Donald Trump resumed his war with The New York Times on Wednesday after a brief respite following last week’s upset victory, going on a Twitter tear over The Gray Lady’s claims that his transition team is in disarray and foreign leaders are struggling to reach him.

The president-elect made his case in trademark fashion, letting rip a rapid-fire string of rebuttals in an early-morning tweet-storm.

The tweets unfolded as follows:

The failing @nytimes story is so totally wrong on transition. It is going so smoothly. Also, I have spoken to many foreign leaders.

I have recieved and taken calls from many foreign leaders despite what the failing @nytimes said. Russia, U.K., China, Saudi Arabia, Japan,

Australia, New Zealand, and more. I am always available to them. @nytimes is just upset that they looked like fools in their coverage of me.

Trump already had been poking the Times since his victory last Tuesday. When the publisher of the newspaper wrote an open letter to readers promising to “reflect” on its coverage and rededicate itself to reporting honestly, Trump mocked the paper.

“The @nytimes sent a letter to their subscribers apologizing for their BAD coverage of me. I wonder if it will change - doubt it?” he wrote on Twitter.

But the Times’ lead transition story Wednesday drew the toughest response yet since the election.

The story reported that the transition efforts were “marked by firings, infighting and revelations that American allies were blindly dialing in to Trump Tower to try to reach the soon-to-be-leader of the free world.”

The report cited some details that have been confirmed by multiple outlets, including that former Rep. Mike Rogers was let go from the transition team, following last week’s ouster of New Jersey Gov. Chris Christie as transition chairman. Vice President-elect Mike Pence took over the team.

The Times, though, went on to report that U.S. allies were “scrambling to figure out how and when to contact Mr. Trump. At times, they have been patched through to him in his luxury office tower with little warning, according to a Western diplomat who spoke on the condition of anonymity to detail private conversations.”

Trump’s transition efforts, meanwhile, are still in a state of flux with the team itself undergoing changes even as his closest advisers vet potential candidates for Cabinet and key White House roles.

Pence, in his new role overseeing the transition, has purged lobbyists from official roles in the transition team, sources told Fox News on Tuesday.

One source said the decision to remove the lobbyists "makes good on [Trump's] vision of how he wants his government constructed."

Overnight, Trump tweeted: "Very organized process taking place as I decide on Cabinet and many other positions. I am the only one who knows who the finalists are!"