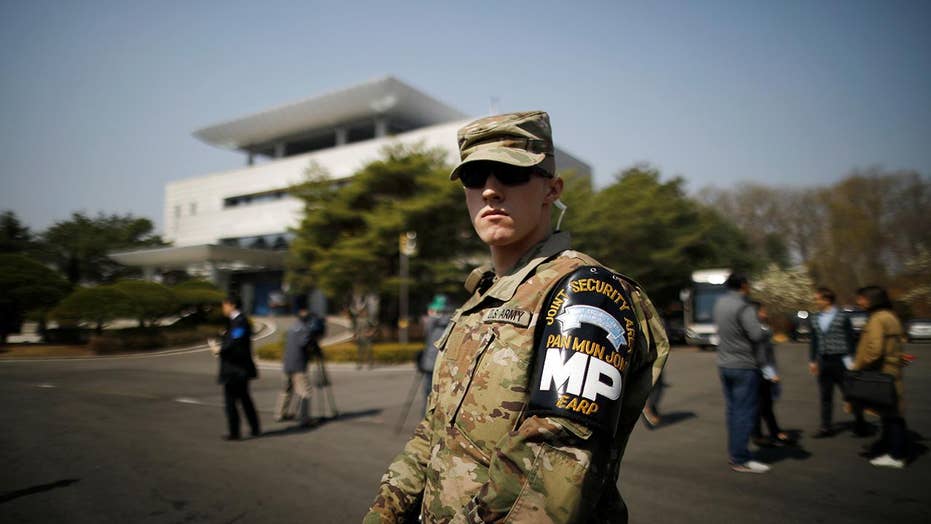 President Trump says U.S. officials are on the ground in North Korea to prepare for the summit; Greg Palkot reports.

What happened to the still unknown number of U.S. servicemen who disappeared during the Korean War and were never returned or accounted for? Families and experts are pressing for President Trump to bring up the heartbreaking question during a summit with Kim Jong Un that may now be back on again.

The U.S. has secured the remains of hundreds of Americans from North Korea over the years, and President Trump was expected to push Kim to allow the U.S. to secure even more before he canceled the summit.

However, for the families of American captives who reportedly survived, or whose fates are still unknown, that was never enough - and they hope that any potential summit will come with a demand for answers about their loved ones after all these years.

Bob and Lois Moore are one such family. Bob's brother, Captain Harry C. Moore, was a fighter pilot with the U.S. Air Force who was shot down off the coast of Korea in 1951. It was the second time Moore had been shot down while serving the U.S., having survived more than 50 days in the wilderness after being shot down over China in 1944.

He wasn't so lucky the second time around. Moore's wife, Lois, learned on New Year's Eve less than two years later that her husband was believed to have been killed in action. The shared grief between Lois and Harry's brother, Bob, would lead them to later marry. They say they still think about him every day. But Moore's story was far from over.

In 2002, the Moores received word from government officials saying they now believed – after some 50 years – that it was possible Harry survived his ordeal. Unearthed testimonies from former Soviet officials revealed that Harry might have been captured and interrogated by the Soviets after being shot down, though his fate afterwards remained unknown.

"Immediately we started trying to find out what actually happened," Bob said. Nearly two decades after receiving that memo, and more than 65 years after his brother's plane was shot down, Bob and Lois say they still haven't received any other information from the government – though they’ve learned plenty themselves. And that's why they're taking matters into their own hands.

SUING THE GOVERNMENT FOR ANSWERS

"We're the only ones I think that ever had the gall to sue the FBI and the CIA, but hell - we'd sue President Trump if we had to," Bob Moore told Fox News. "We do it on behalf of all the families," Moore said. "There are nearly 8,000 still missing from recent wars that haven't been accounted for."

Statistics compiled by the Defense POW/MIA Accounting Agency (DPAA) indicate some 7,702 Americans remain missing from the Korean War as of May 18, 2018. Families like the Moores receive regular updates on the government's efforts to learn more.

"We're the only ones I think that ever had the gall to sue the FBI and the CIA, but hell - we'd sue President Trump if we had to... We do it on behalf of all the families [like ours]... There are nearly 8,000 still missing from recent wars that haven't been accounted for."

Moore says those letters, called the "Family Update," tell the same story every time, and notes that his family has spent time chasing down leads themselves. Just this month, their daughter traveled to South Korea to meet with North Korean defectors, who unfortunately provided little in the way of new information on Harry.

The Moores say the government is ignoring evidence uncovered in the past that indicates Harry was likely captured alive, and used as an instructor for pilots in the Soviet Air Force. That's according to an American analyst the Moores met with in Washington, and who apparently interviewed the Russian pilots who shot down Harry's plane.

According to the Moores, that analyst told them that both pilots mentioned remembering a “Gary” or “Harry Moore” specifically by name, and without any prompting from him.

It was the testimony of one of those same pilots, the Moores say, that inspired the government to update Harry's status in 2002. Since that time, Bob Moore says the government has thrown cold water on that testimony – suggesting it is insufficient to prove anything.

"What we're saying is we're never going to get the information from the government unless we can force them to open classified files they've had for 60 years," Moore says of the lawsuit he has filed. "It's unfair to let someone give their life and then be totally ignored," he added.

EXPERTS SAY U.S. HAS PLENTY OF EVIDENCE, JUST NOT DIGGING

Mark Sauter is a long-time North Korea watcher who is helping the Moores in their quest. He told Fox News that "just last year, we were able to have records from 1954 declassified; they revealed a secret U.S. intelligence mission to insert agents into North Korea to look for US POWs a year after all the POWs were supposed to have been returned.

"What all the more recent, still classified records show we can only imagine," Sauter added.

Sauter notes there have been plenty of documented cases of Americans known to be alive after their capture in North Korea, like the group known as the Ashley Five – who were even the subject of failed rescue attempts by the U.S. government.

"We believe that U.S. Korean War POWs were transferred to the Soviet Union and never repatriated. This transfer was a highly-secret MGB [KGB] program approved by the inner circle of the Stalinist dictatorship."

— 1993 Dept. of Defense report on "The Transfer of U.S. Korean War POWs To the Soviet Union"

Sauter also points to the case of Major Sam Logan, who was filmed in North Korean custody in a piece of video footage circulated by the Soviet Union at the end of the Korean War. Logan hasn’t been heard from since.

Norm Kass spent 30 years at the DoD, and for 20 of those years he was working on the presidentially mandated U.S.-Russia Joint Commission on POW/MIAs. He says "there was a definite link between things [he] was involved in and various reports the U.S. government obtained alleging American servicemen had been held by the North Koreans."

Kass points to a 1993 report, titled "The Transfer of U.S. Korean War POWs To the Soviet Union," as proof of just how much the U.S. government knows about this issue. The report was compiled by the Department of Defense Prisoner of War/Missing Personnel Office (DPMO), now known as the aforementioned DPAA. In it, U.S. government officials alleged "that US Korean War POWs were transferred to the Soviet Union and never repatriated” as part of “a highly-secret MGB [KGB] program approved by the inner circle of the Stalinist dictatorship…

“The range of eyewitness testimony as to the presence of U.S. Korean War POWS in the GULAG is so broad and convincing that we cannot dismiss it,” researchers concluded.

Kass points out that there is no specific number of American captives outlined in that report, and to this day he devotes much of his time to tracking down tracking down missing Americans around the world with the POW Investigative Project. Still, he suggests there has been plenty of other evidence indicating U.S. POWs captured during the Korean War wound up being shipped to various parts of the world.

During his time working with the DoD, which included deployments to remote parts of Russia for weeks at the time, Kass uncovered radio broadcasts from eastern European countries where American servicemen who had been captured alive were mentioned by name. Other reports he was privy to outlined instances of American servicemen seen being marched through the streets of the Soviet Union at the time of the Korean War.

The problem is corroborating many of these reports, something Kass says Russian authorities have never been willing to do. However, he added that they're not the only ones to blame for the lack of answers more than half a century later.

"This is a story, a phenomenon that has many dimensions to it," Kass says, "and the U.S. government, frankly, I don't think devoted the kind of due diligence needed to get to the bottom of it."

HOPE IN “THE TRUMP APPROACH”

That said, Kass believes there is still hope, and a summit between these two particular leaders could be the key to answering lingering questions from families like the Moores. He notes it would also send a strong message to those who are currently serving in uniform today.

"This is a story, a phenomenon that has many dimensions to it, and the U.S. government, frankly, I don't think devoted the kind of due diligence needed to get to the bottom of it."

"For someone now in uniform, I think the morale boost that would come from the administration stepping in and saying that 'we are working seriously to try to resolve these questions' would be an enormously positive factor," Kass says. "It's showing that the government is not turning its back on anyone."

The "Trump approach," as Kass calls it, could be "a true blessing here, because if this is going to be effective it has to be handled quietly.

Still, he says President Trump should make it clear that "it's not just about bringing back body parts. It's finding out what happened to these people."

And while Kass says he isn't sure what the U.S. could offer in return, he thinks "the idea that Kim and the president could speak out of earshot of all the microphones, and put something like this in place, that seems - just from the style of these two leaders - like something that is eminently doable."