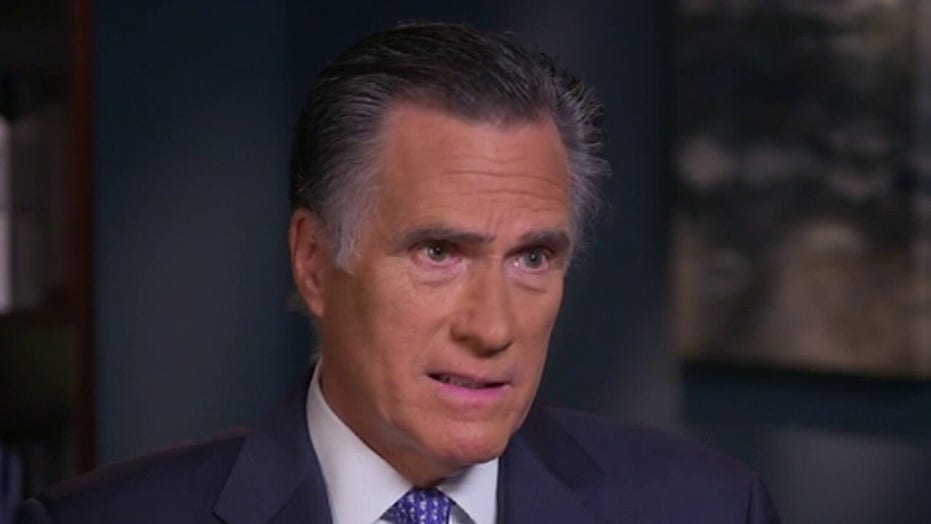 President Trump targeted Sen. Mitt Romney, R-Utah., and congressional Democrats in a string of videos posted to his Twitter account Wednesday -- the day he was acquitted in his impeachment trial, and one day after his State of the Union address.

On Wednesday, shortly after Romney announced that he was going to vote to convict Trump over his alleged abuse of power -- one of the two articles of impeachment against him -- the president shared a montage mocking the Utah senator and other Democrats for their facial expressions during his address.

The video, which was created by Twitter user Carpe Donktum, begins with clips cutting in of House Majority Whip Jim Clyburn, D-S.C., and Sen. Bob Menendez, D-N.J., visibly shaking their heads, as Trump walks into the House chamber to the tune of Nazareth's 1975 hit "Love Hurts."

It cut to a slow-motion clip of Trump allegedly snubbing House Speaker Nancy Pelosi, D-Calif., who had tried to give him a handshake as he handed copies of his speech to her and Vice President Mike Pence.

"The state of our union is stronger than ever before," Trump declared, as the video cut to a group of Senate Democrats who remained seated and expressionless while GOP lawmakers roared with applause during his address.

As he boasted the drop in the unemployment rate for African-Americans, Hispanic Americans and Asian Americans to its "lowest levels in history," an edited clip shows Rep. Adam Schiff, D-Calif, rolling his eyes. And, when celebrating the millions of people who have been lifted off of welfare, edited clips were shown of Sen. Kamala Harris, D-Calif.; Rep. Debbie Dingel, D-Mich., and Senate Minority Leader Chuck Schumer, D-N.Y.

"For those watching at home, I want you to know we will never let socialism destroy American health care," Trump vowed to a group of Dem lawmakers shrugging and shaking their heads.

It then showed "Squad" members Rep. Rashida Tlaib, D-Mich., and Rep. Ilhan Omar, D-Minn., appearing distracted from the speech as Trump reiterated his "America first" philosophy. Others are seen checking their phones during the address.

The montage ended with Trump's final remarks, as well as Pelosi ripping up his speech and Romney applauding with a rather underwhelming facial expression.

Another Twitter video, posted Wednesday evening, played out like an attack ad, with an announcer calling Romney a "Democrat secret asset," not to mention "slick" and "slippery," alongside a series of CNN clips.