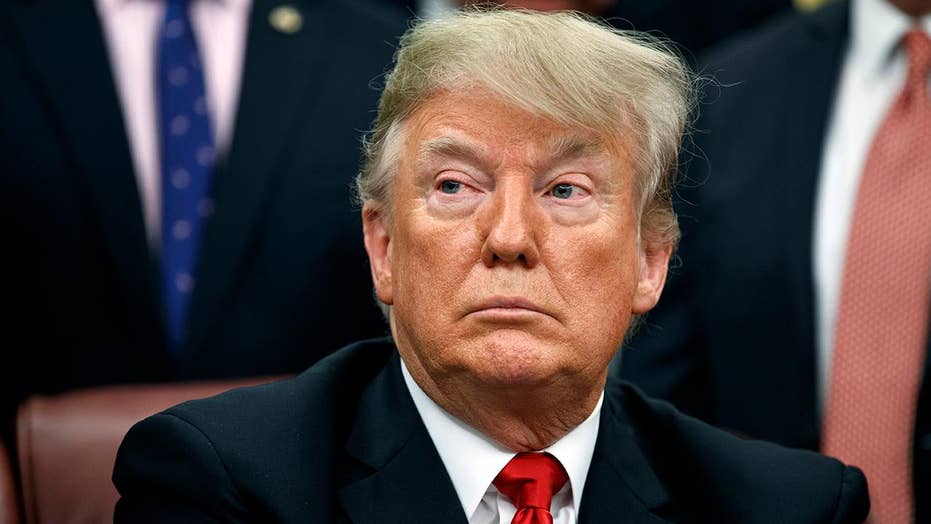 President invites Republican and Democrat leaders from the House and Senate to discuss funding for the border wall; Rich Edson reports from the White House.

President Trump plans to hold a highly anticipated border security meeting with congressional leaders in the Situation Room on Wednesday afternoon, Fox News has learned -- choosing a setting meant to underscore the urgency of the border problem.

A source familiar with the details confirmed the choice of the White House Situation Room for the meeting, which comes as the partial government shutdown drags into its 12th day amid a deadlock over border security funding.

In a Cabinet meeting earlier Wednesday that served as a preview of the briefing with Hill leaders, the president maintained his stance that a wall along the southern border is necessary.

“If they knew they couldn’t come through, they wouldn’t even start,” Trump said at the meeting with Cabinet secretaries and top advisers. “We have to have a wall.”

He added: “We need a wall and in the end, I believe we will be successful.”

Trump said the U.S.-Mexico border is “like a sieve,” and vowed to “make a plea” for his border wall.

While much of the federal government is running as normal, the partial shutdown has forced hundreds of thousands of federal workers to stay home or work without pay, and has closed some federal services and tourist sites.

The shutdown began on Dec. 22, as Democrats vowed to block any funding for Trump’s border wall along the U.S.-Mexico border and Trump insisted on billions for the long-promised barrier. The briefing, which is slated for around 3 p.m. ET Wednesday, is expected to focus on the border security issue.

House Democratic Leader Nancy Pelosi, D-Calif., who is poised to become speaker of the House of Representatives on Thursday when Democrats take back control of the chamber, and Senate Democratic Leader Chuck Schumer, D-N.Y., plan to attend as well.

The choice of the Situation Room would seem to preclude the possibility of a live, televised meeting, similar to one held last month as the government barreled toward a partial shutdown. The setting is by nature private. In order to enter the Situation Room, participants of briefings are forced to surrender their cell phones.

The Situation Room is typically reserved for matters of national security and defense.

With Congress set to return on Thursday, House Democrats are preparing their own plan to re-open the government. It includes a bill to fund the Department of Homeland Security, which oversees construction of the wall, at current levels through Feb. 8, with $1.3 billion for border security—a figure far less than Trump requested.

“We are giving Republicans the opportunity to take yes for an answer,” Pelosi said. “Senate Republicans have already supported this legislation, and if they reject it now, they will be fully complicit in chaps and destruction of the President’s third shutdown of his term.”

But White House Press Secretary Sarah Sanders on Tuesday called Pelosi’s plan a “non-starter,” saying that it “does not fund our homeland security or keep American families safe from human trafficking, drugs, and crime.”

“President Trump has made a serious, good faith offer to Democrats to open the government, address the crisis at our border, and protect all Americans,” Sanders said in a statement. “We have heard nothing from the Democrats, who so far have refused to compromise. Speaker Designate Nancy Pelosi released plan that will not re-open the government because it fails to secure the border and puts the needs of other countries above the needs of our own citizens.”

Prior to Sanders’ statement, Trump signaled he may still be willing to “make a deal” with Democrats.

He added: “One thing has now been proven. The Democrats do not care about Open Borders and all of the crime and drugs that Open Borders bring!”