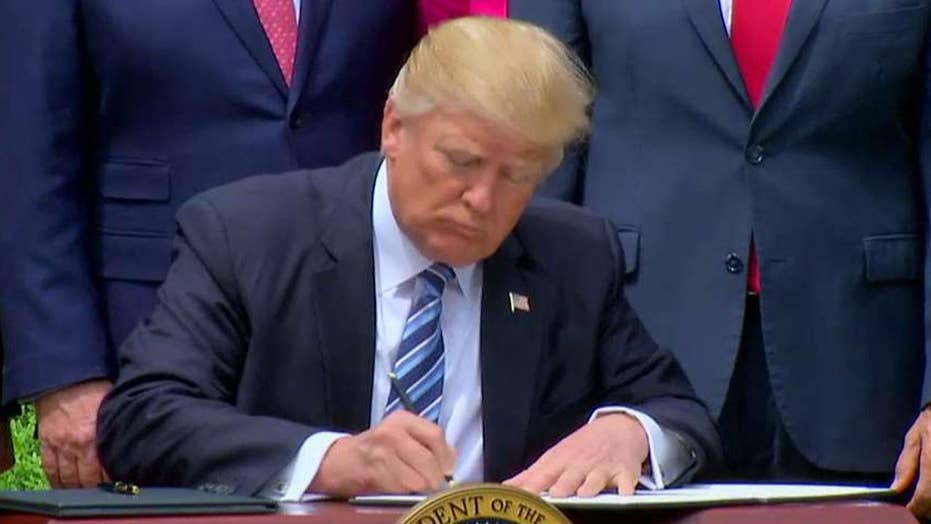 Trump: We are giving our churches their voices back

Declaring "no one should be censoring sermons," Trump announced the order, which fulfilled a campaign pledge, during a Rose Garden ceremony Thursday attended by religious leaders, activists and Vice President Pence.

“We will not allow people of faith to be targeted, bullied or silenced again and we will never stand for religious discrimination,” Trump said before signing the order, which states it is now administration policy is “to protect and vigorously promote religious liberty.”

The ban on political speech from the pulpit is rooted in an amendment introduced in 1954 by then-Democratic Sen. Lyndon Johnson that gave the IRS authority to punish tax-exempt charitable organizations, including churches, for making political endorsements or getting involved in political campaigns.

The order directs the IRS to exercise maximum enforcement discretion to alleviate the burden of the so-called Johnson Amendment.

In addition, it instructs the Treasury Department not to target the tax-exempt status of churches and other institutions if they express support for political candidates.

The order also directs the Department of Justice to ensure religious protections are afforded to individuals and groups, such as Little Sisters of the Poor, a group of nuns who take a vow of poverty in serving the elderly.

In his introductory remarks, Pence said the National Day of Prayer is a time to reaffirm “the vital role people of faith play in American society” and praised the president for marking the day in such a public manner.

Trump campaigned against the ban and pledged in his address to the Republican National Convention that he would “work very hard to repeal that language and to protect free speech for all Americans.”

Trump called up several of the Little Sisters of the Poor members and congratulated them on their landmark victory in the Supreme Court over the issue of the contraceptive mandate included in ObamaCare.

According to Trump, more than 50 religious groups filed lawsuits against the Obama administration for violating their religious liberty.

Before the final order was released, several religious liberty groups expressed support for the administration’s actions.

“The first freedom in the Bill of Rights is religious freedom. America was born on the foundation of religious freedom and it is one of our most cherished liberties. There could be no better day to sign an executive order on religious freedom than the National Day of Prayer,” said Mat Staver, chairman of Liberty Counsel.

Mark Rienzi, counsel for The Becket Fund, said on Twitter he was encouraged by the “promise of the protection” coming from the White House and looked forward to seeing the final language.

The Becket Fund is the public interest law firm which has represented the Little Sisters of the Poor in their fight to be exempted from ObamaCare’s contraceptive mandate.

The executive order drew critics from the left and the right.

"If the … EO on religious liberty ends up being what media outlets are currently reporting, then it'll be woefully inadequate," tweeted Ryan Anderson, a senior research fellow at the conservative Heritage Foundation.

The American Civil Liberties Union argued the executive actions constitute “a broadside to our country’s long-standing commitment to the separation of church and state” that will divide the nation and permit discrimination.

"President Trump’s efforts to promote religious freedom are thinly-veiled efforts to unleash his conservative religious base into the political arena while also using religion to discriminate. It’s a dual dose of pandering to a base and denying reproductive care. We will see Trump in court, again,” said ACLU Executive Director Anthony D. Romero in a statement.