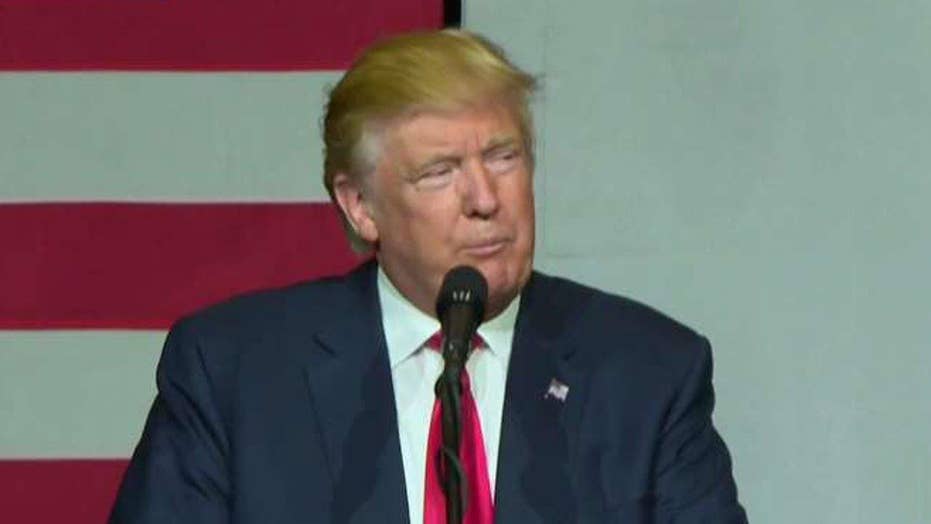 Trump: Our campaign is 'existential threat' to establishment

Donald Trump launched a blistering counterattack Thursday in response to multiple allegations of sexual assault, calling them “entirely fabricated,” accusing the media outlets that reported them of backing Hillary Clinton and slamming the four accusers as “horrible, horrible liars.”

In a nearly hour-long speech, with language fiery even by Trump standards,  the Republican spent over half of it blasting the media, in particular the New York Times, for allegedly pushing an agenda to elect Clinton.

“Let’s be clear on one thing, the corporate media in our country is no longer involved in journalism – they are a political special interest no different from a lobbyist,” Trump said in the speech in West Palm Beach, Fla. “Their agenda is to elect crooked Hillary Clinton at any cost, at any price, no matter how many lives they destroy.”

Trump said the campaign has “substantial evidence” to dispute the latest “orchestrated” allegations and will release them at the appropriate time.

“These vicious claims about me of inappropriate conduct with women are totally and absolutely false.  These claims are all fiction, entirely fabricated and are outright lies,” he said.

He singled out the accusers as “horrible, horrible liars.”

In a story published Wednesday evening, The New York Times reported that 74-year-old Jessica Leeds of New York told the paper Trump groped her on a flight more than 30 years ago. Leeds says Trump grabbed her breasts and tried to put his hand up her skirt.

In the same story, Rachel Crooks told the paper that the real estate developer "kissed me directly on the mouth" after she introduced herself to him outside a Trump Tower elevator in 2005.

"It was so inappropriate," Crooks told the paper. "I was so upset that he thought I was so insignificant that he could do that."

Also Wednesday night, the Palm Beach Post published claims by a Florida woman that Trump had groped her during a concert at his Mar-a-Lago estate in January 2003. The woman, 36-year-old Mindy McGillivray, told the paper that she "chose to stay quiet" and did not report the incident to authorities.

Additionally, PEOPLE Magazine writer Natasha Stoynoff published a story late Wednesday detailing her own encounter with Trump in 2005 when she went to interview Donald and Melania in Mar-a-Lago.

Stoynoff says that Trump showed her one “tremendous” room and allegedly pushed her against the wall and was “forcing his tongue” down her throat.

Even before his rally, Trump blasted the reports on Twitter.

Why didn't the writer of the twelve year old article in People Magazine mention the "incident" in her story. Because it did not happen!

The phony story in the failing @nytimes is a TOTAL FABRICATION. Written by same people as last discredited story on women. WATCH!

In a statement, PEOPLE Editor in Chief Jess Cagle stood by the account from their reporter.

"We are grateful to Natasha Stoynoff for telling her story. Ms. Stoynoff is a remarkable, ethical, honest and patriotic woman, and she has shared her story of being physically attacked by Donald Trump in 2005 because she felt it was her duty to make the public aware," he said.

"To assign any other motive is a disgusting, pathetic attempt to victimize her again. We stand steadfastly by her, and are proud to publish her clear, credible account of what happened," he said.

Earlier, the Trump campaign, in challenging the reports, said it is planning to file a lawsuit against The New York Times.

Apart from attacking the media, Trump on Thursday spent much of his time on the Clintons and what he called the “international corruption of the Clinton machine.”

When the crowd chanted the refrain of “lock her up,” Trump allowed it to ring out, before adding: “She should be locked up.”