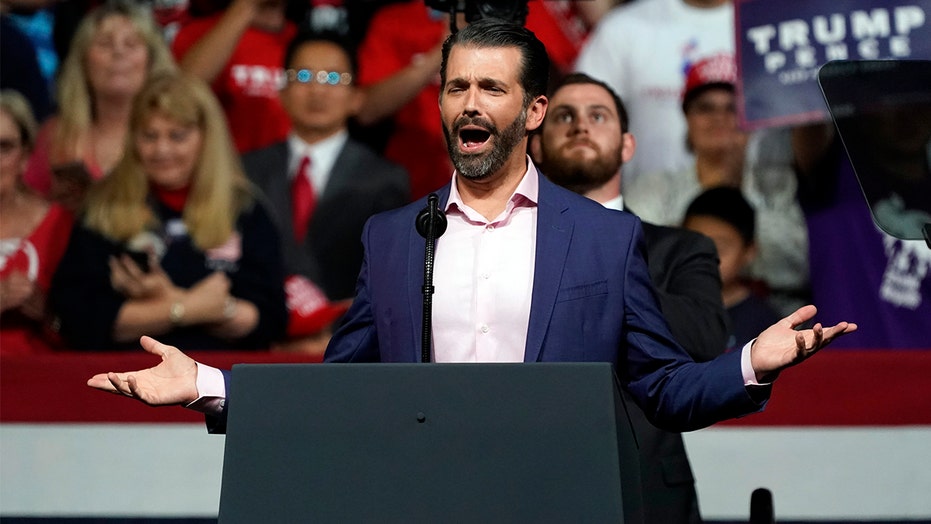 Donald Trump Jr., in a seemingly facetious remark Tuesday, suggested any statues torn down during recent protests be replaced with a “more sturdy” statue of his father, President Trump.

“Want to save our monuments? Let’s get a movement going to replace any statue torn down during these riots with a new and more sturdy statue of @realDonaldTrump,” Trump Jr. wrote on Twitter. “The nonsense would stop instantly.”

Earlier Tuesday, the president blasted “weak” states for allowing the removal of statues and monuments of historical figures, either officially or by failing to stop protesters to take it upon themselves to remove them.

“I don’t like it at all,” Trump said of the move to remove statues on “Fox & Friends," adding: “I don’t like anything that’s going on.”

“I’ve stopped federal, but the states are -- a lot of states are weak. A lot of people are weak and they’re allowing it to happen,” Trump continued.

The president announced Monday that he would soon sign an executive order meant to protect public statues and monuments from being damaged or destroyed by protesters.

In San Francisco, protesters defaced and toppled a statue of Grant, who led the Union Army during the Civil War. Protesters that same night also tore down statues of St. Junipero Serra and Francis Scott Key, who wrote the lyrics to "The Star-Spangled Banner."

On Monday, Trump wrote on Twitter that there were “numerous people arrested” while trying to tear down a statue of Andrew Jackson in Washington D.C.’s  Lafayette Park.

This week, officials announced that a statue of Teddy Roosevelt would be removed from the front of the Museum of Natural History in New York City, and D.C. delegate Eleanor Holmes Norton introduced a resolution to tear remove the Emancipation Statue of Abraham Lincoln from Lincoln Park due to its “problematic” depictions.

“It’s going over a little bit around the world now. They want to remove the statue of Gandhi, OK? All he wanted was peace," Trump said on "Fox & Friends."