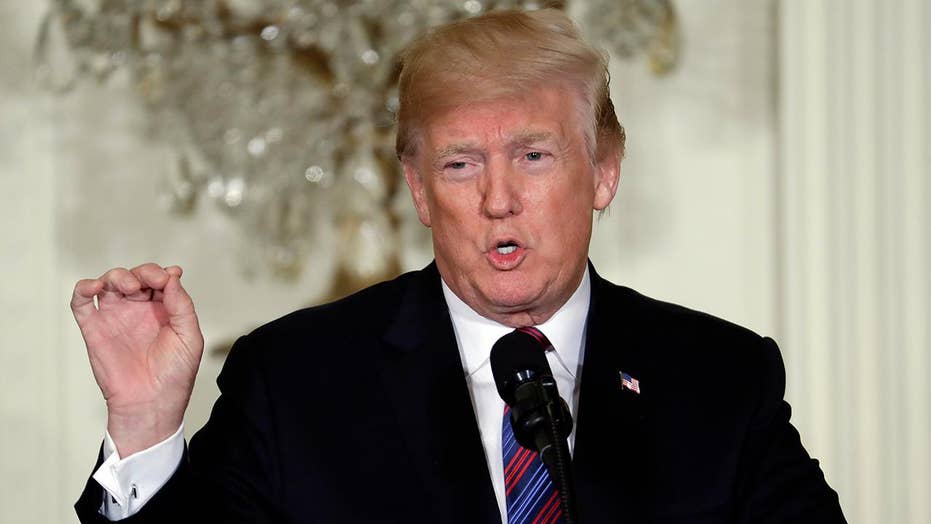 President says the Mexican border is unprotected by our laws, says he wants to pull U.S. troops from Syria.

President Trump said Tuesday that he wants to “get out” of Syria and “bring our troops back home,” saying that the administration is “very seriously” considering doing just that.

During a joint press conference Tuesday with presidents of Estonia, Lithuania and Latvia, the president addressed his administration’s military policy in Syria.

“We’ll be making a decision as to what we do,” Trump said, noting that he was inclined to pull troops out. “I want to get out and bring our troops back home. I want to start rebuilding our nation.”

Trump said the U.S. has spent $7 trillion in the Middle East over the last 17 years.

“We get nothing out of it. Nothing. Nothing,” Trump said. “Seven trillion. We have nothing except death and destruction—it’s a horrible thing. We were very successful against ISIS, we’ll be successful against anyone militarily, but sometimes it’s time to come home and we’ll be thinking about that very seriously.”

While the president wants to bring troops home to the U.S., his special envoy to the ISIS fight said the U.S. mission has not ended, and vowed to “complete that mission.”

“We are in Syria to fight ISIS, that is our mission and our mission isn’t over and we are going to complete that mission,” Special Envoy Brett McGurk said down the street from the White House at the U.S. Institute of Peace, at the same time as Trump took part in the press conference. “We will not rest until ISIS is gone.”

Critics have suggested that a withdrawal of American forces from Syria would give Russia and Iran access to vast oil fields in eastern Syria, and would betray Kurdish and Arab forces who have partnered with the U.S. military against ISIS.

But Trump said ISIS “got the oil,” and suggested that “funded their campaigns.”

The president also doubled down on how “tough” his administration has been on the Kremlin.

“Nobody has been tougher on Russia. Getting along with Russia would be a good thing, not a bad thing,” Trump said earlier in the day at the White House Tuesday. “And almost everybody agrees with that, except for very stupid people.”

The president added: “We’ve been very tough on that…very tough on Russia, frankly. If we got along with Russia, it’s possible we won’t, if we can all get along, that would be great.”

At the joint press conference, he reiterated his comments.

“Nobody has been tougher on Russia than I have,” Trump said again, alongside the Baltic leaders. “We are very strong on energy, essentially now energy independent. That’s not a positive for Russia, but certainly positive for the U.S.”

He went on to outline the $700 billion budget for the U.S. Military, calling it the “largest ever passed,” adding that “the military is now stronger than we’ve ever had before, by far—that’s not exactly a great thing for Russia.”

He added: “If I did [have a good relationship with Putin], that would be a very great thing. But there’s also a great possibility that won’t happen, okay? Who knows.”

On Monday, a Russian official told Kremlin media that Trump invited Putin to the White House for a meeting, which had yet to be scheduled.

The White House confirmed that Trump had discussed a possible meeting with Putin, and suggested the White House as a venue for the summit.

“As the President himself confirmed March 20, hours after his last call with President Putin, the two had discussed a bilateral meeting in the ‘not-too-distant future’ at a number of potential venues, including the White House,” Press Secretary Sarah Sanders said Monday. “We have nothing further to add at this time.”

If a Trump-Putin meeting does take place at the White House, it will mark the first time the Russian president visited 1600 Pennsylvania Avenue since the George W. Bush administration. Putin visited the White House in both November 2001 and September 2005.

The president has been criticized for not being tough enough on Russia, but last week, the Trump administration joined Britain and more than two dozen allies in sanctioning the Kremlin over the poisoning of a Russian ex-spy in England.